Believe it. The nursery curtains are done and you’ll never believe what they cost me.

They’ve been on my to-do list for a while and I’m happy to cross ‘em off! If you’re new, read this post to catch up on how I started the curtains. If you’ve read it already or just want a refresher, here are the highlights: 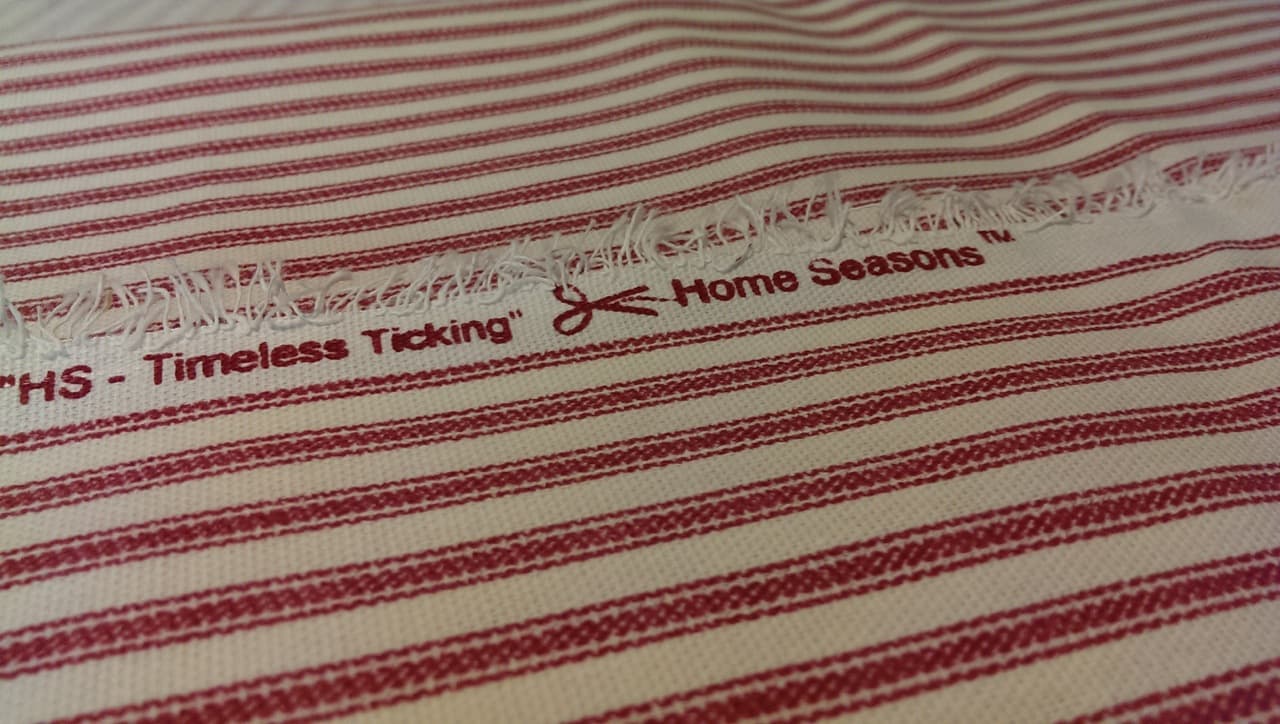 That last bullet? It’s key. When I went back for more fabric for the second window, they were all out. The employees had no idea whether they were getting more in… awesome. I felt like a royal idiot for not buying more the first time around. I could have driven to other Joann stores in the surrounding areas to track some down, but at this point in the brainstorming process, I had started to like the idea of the curtains being tied in the middle instead of hanging as panels on either side of the window. Kind of like these examples… 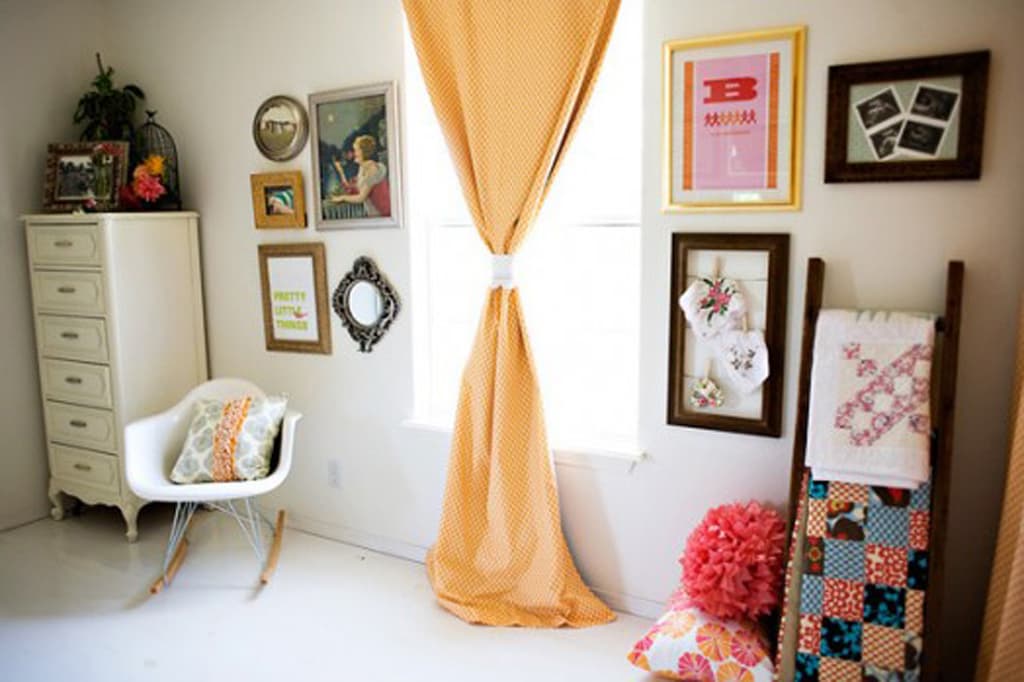 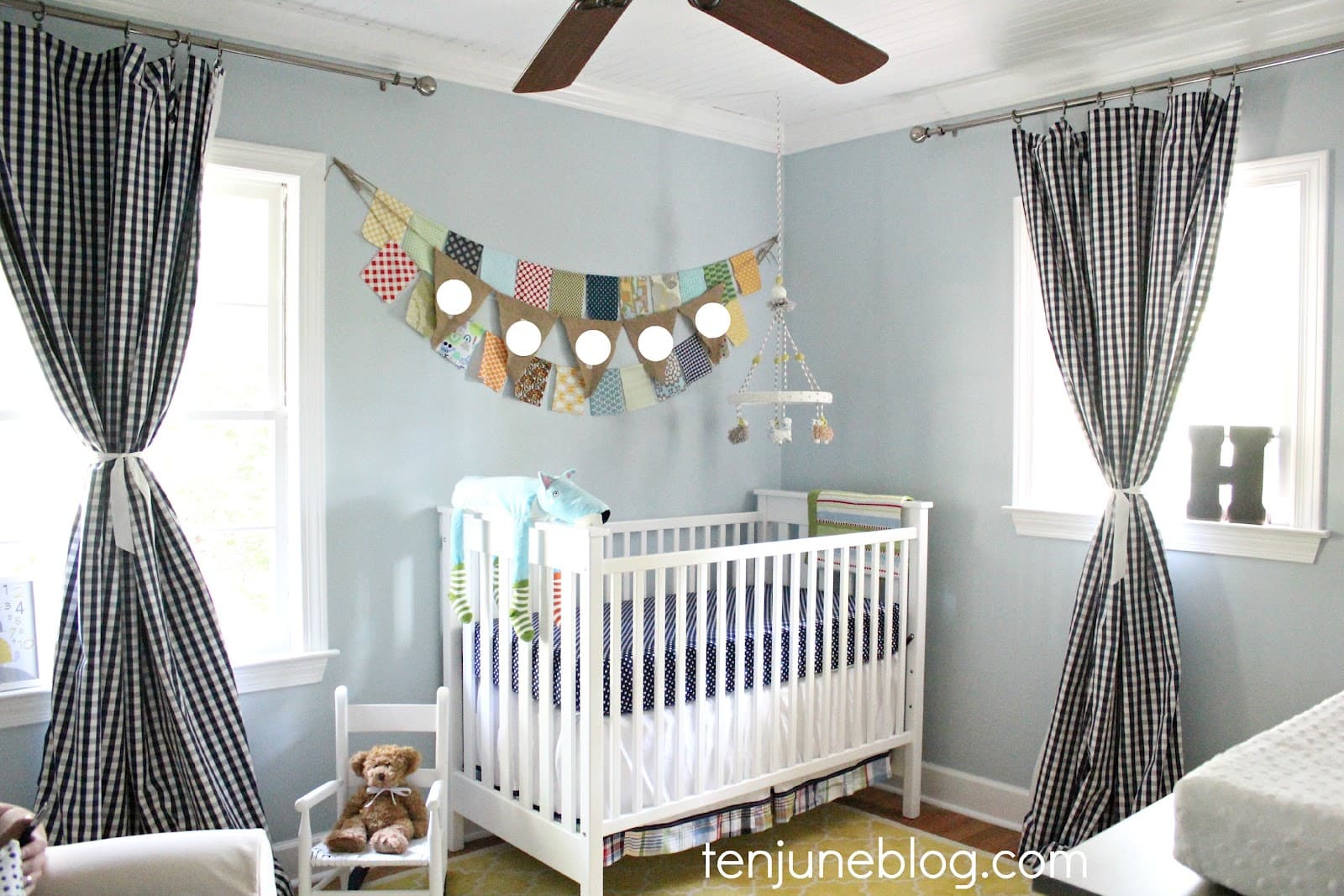 You get the idea, right? It’s looks a little bit whimsical and I like that, especially for a nursery. By this point, I had two panels made for the taller window and no fabric for the shorter window. I was also starting to realize I needed to address the concept of “blacking out” the curtains to make mid-day naps a little bit easier to come by. In my experience, a baby in a dark room generally sleeps longer. I had seen black out fabric at Joann’s but it felt a bit plastic-y and I wasn’t digging it. Then I remembered that I still had the old tab-top red curtains from the living room laying around somewhere. Remember these poorly-hung bad boys?

In my head, I imagined I’d be able to sew the red curtains onto the red-and-white-striped curtains to block more light. For once, what I imagined in my head actually worked. No one was more surprised than me. I laid out the two panels and pinned the two together. The overlapping space didn’t bother me since it would be well obscured behind the dresser and well below the window sill. 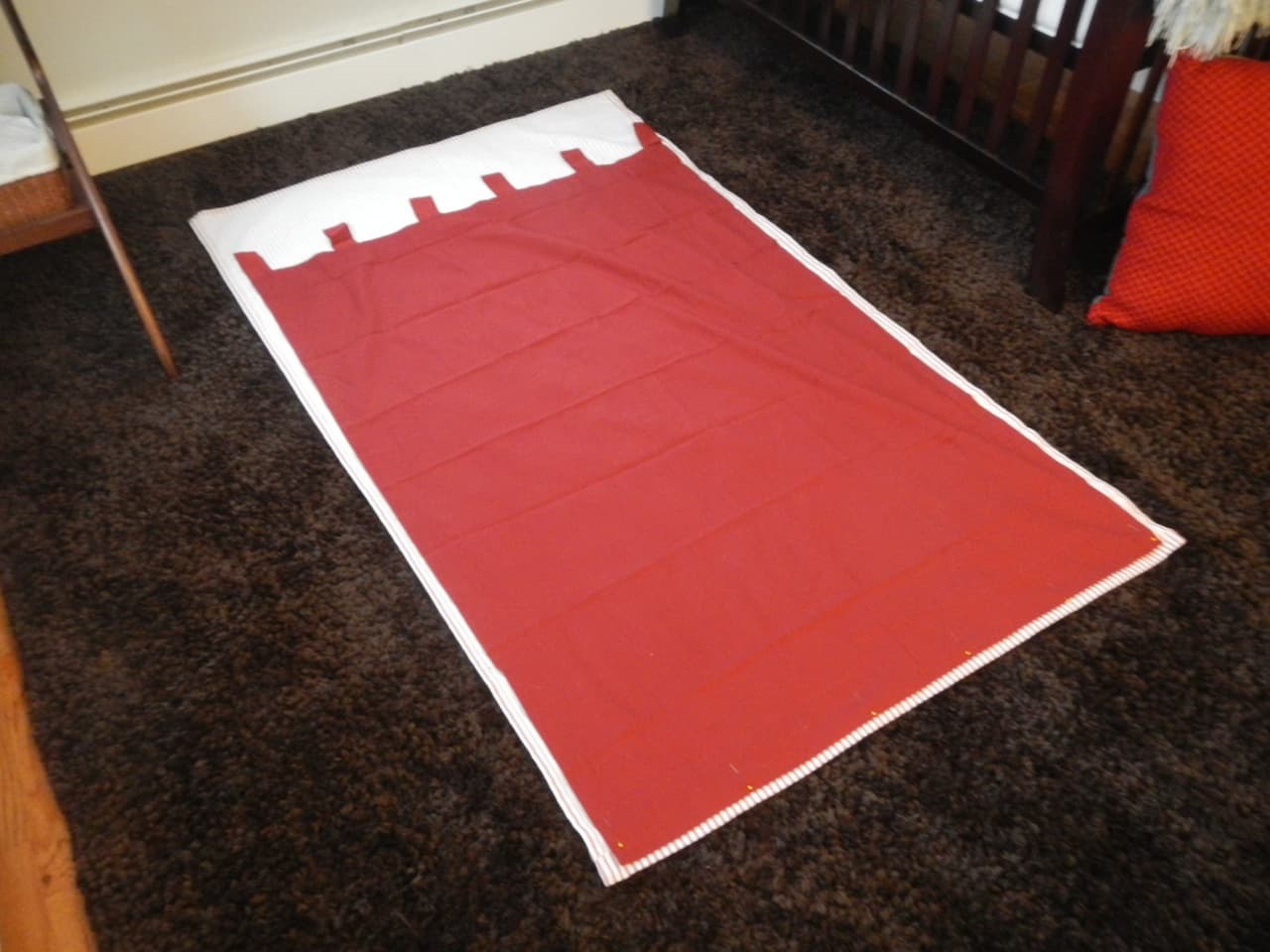 Then, I took some old ribbon and cut it up to pin to the top of the panels. 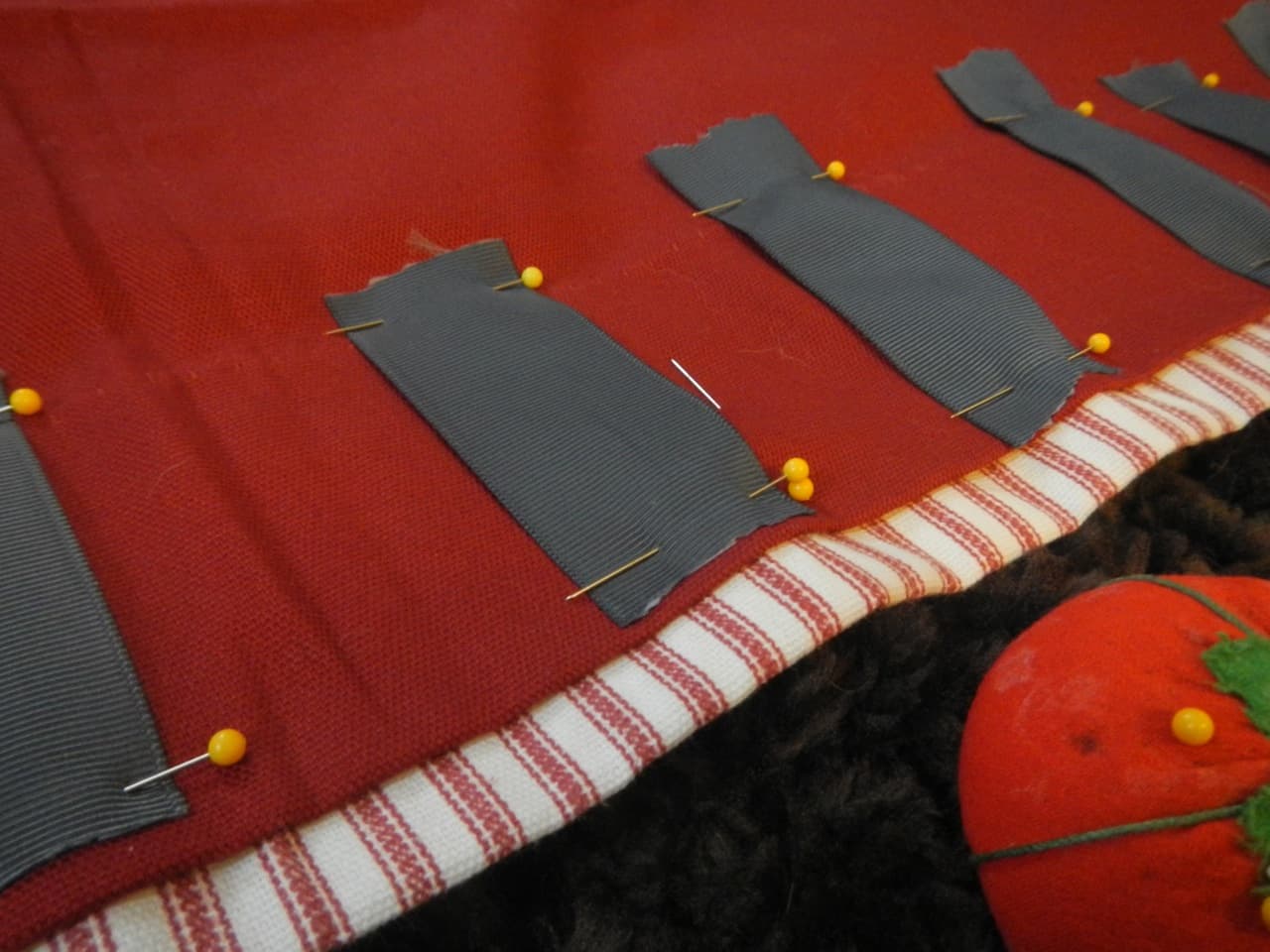 I didn’t want the curtain rod to run through the top of the striped curtain, creating a bunched-up look. I was looking for the panel to have a few sophisticated pleats instead, hence the ribbon idea that I’d seen on Pinterest and beyond. 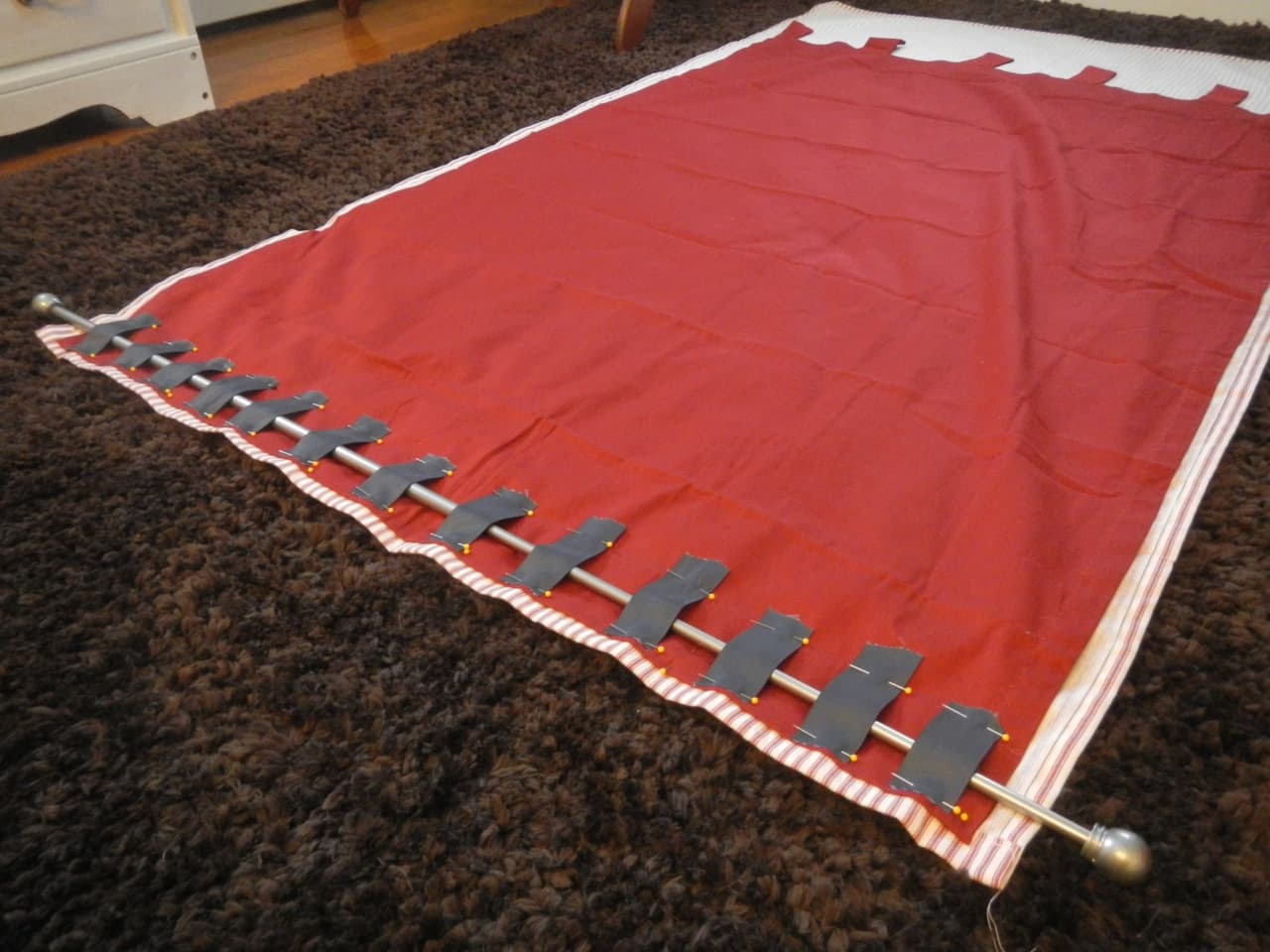 I grabbed the iron and smoothed everything out before trying out Stitch Witchery for the first time. 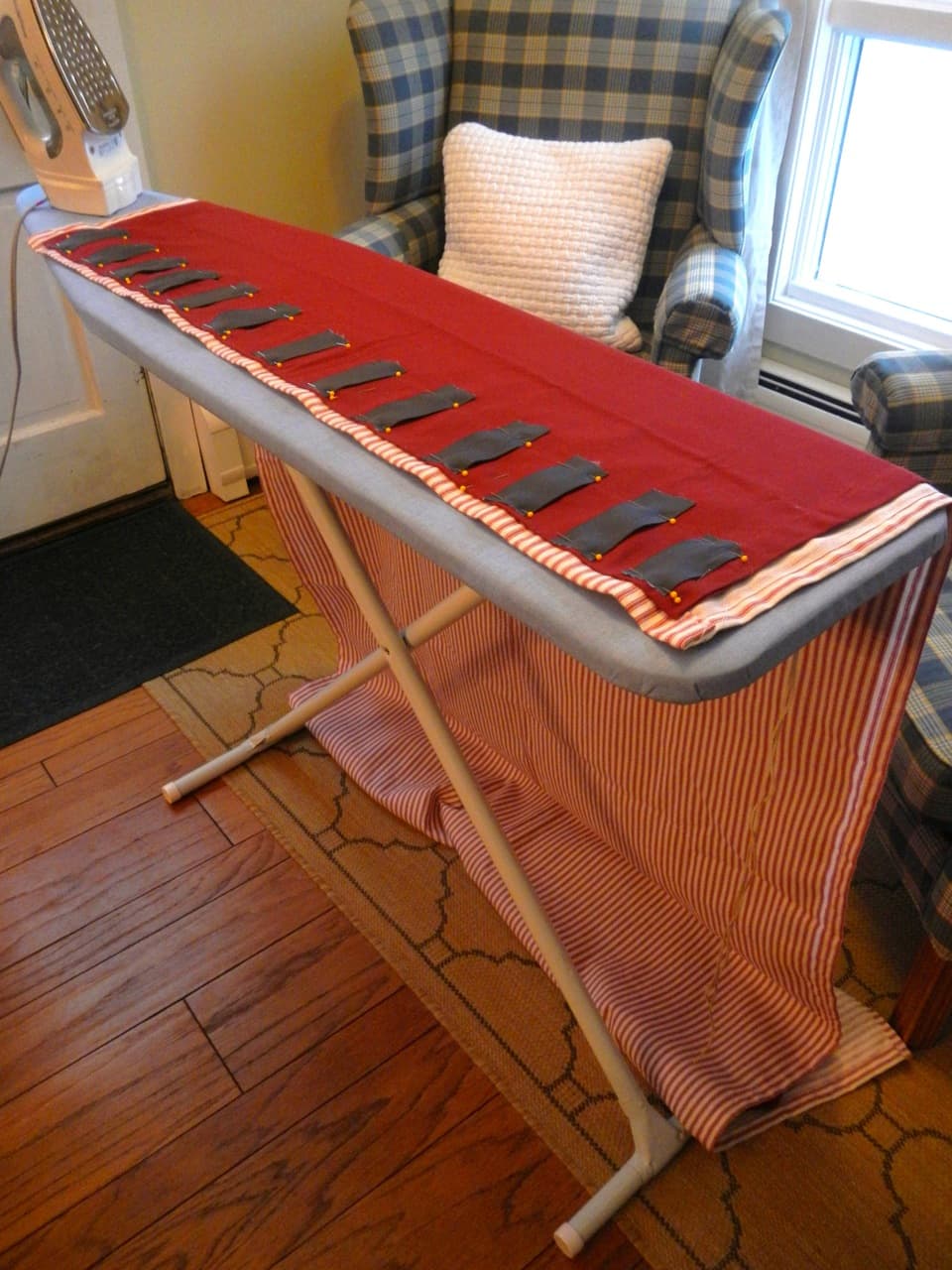 I figured I’d use Stitch Witchery to “faux sew” the two pieces together and a hot glue gun to attach the ribbon to the red fabric. 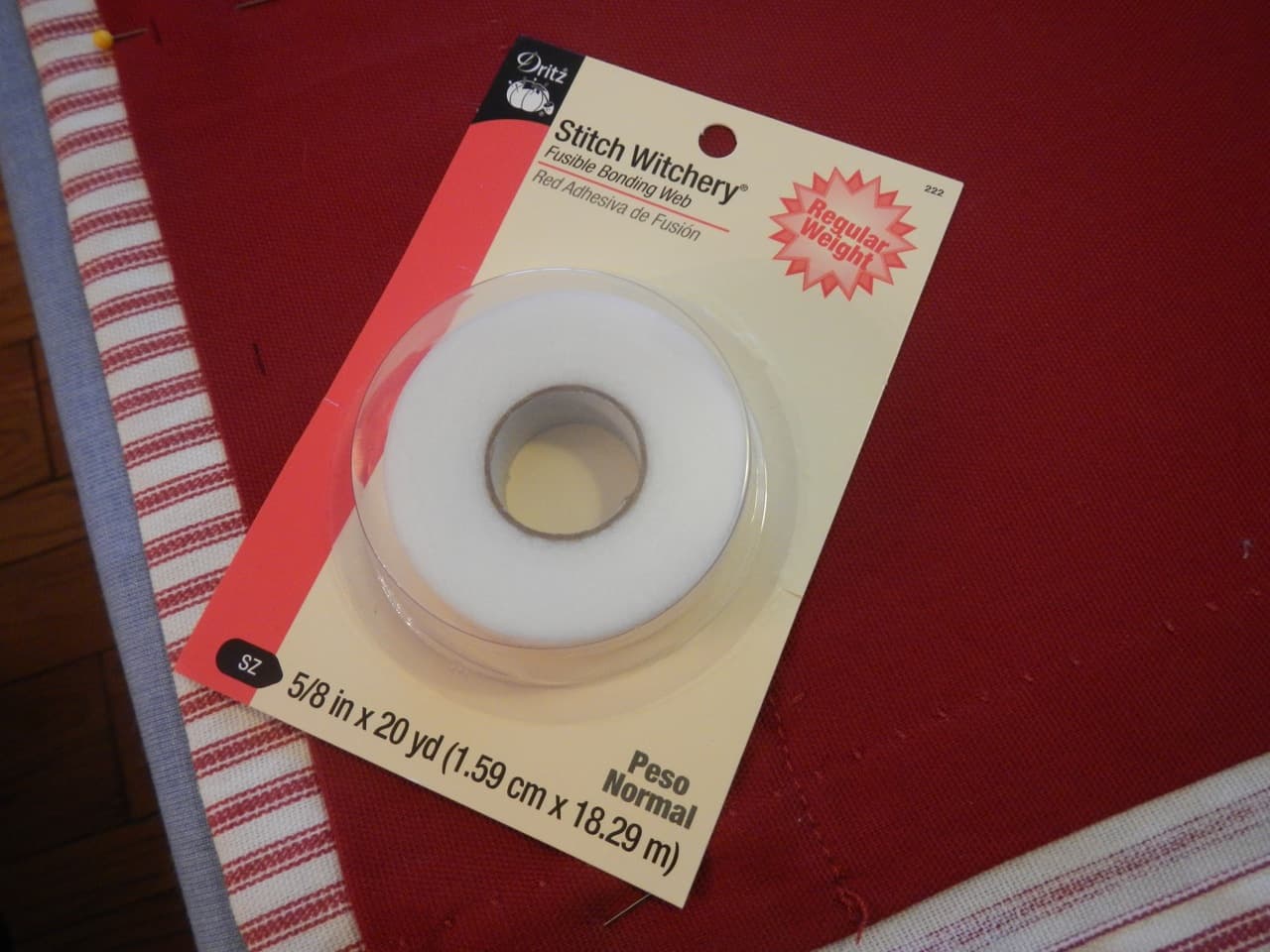 Well, I figured wrong. Ah. Back to my old ways. That “figuring right” thing didn’t last long! The Stitch Witchery didn’t work well at all (I was probably doing something wrong) and I got so frustrated that I decided to sew the two pieces together instead. Of course, I started to hand sew it for about a half hour before realizing that I was wasting my time and sticking the needle to my index finger a few too many times. I called in my reinforcements: Grams. I told her I was on my way over to borrow her sewing machine and somewhere along the way, I realized that I could use the red tabs from the old living room curtains instead of ribbon so it would hold a bit better. Two for three ain’t bad! 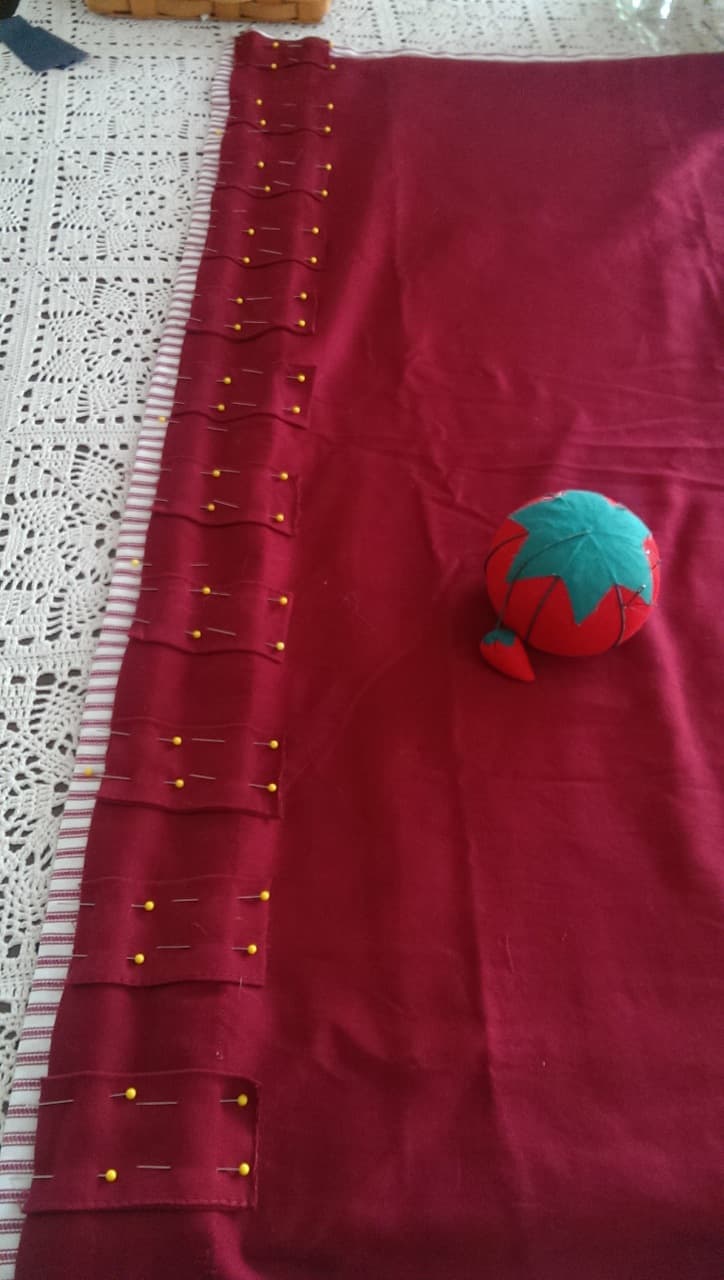 I pinned the tabs to the top and went to town on the machine. While I was sewing, Grams made a few ties using leftover fabric. She skillfully flipped them inside out after sewing with a large knitting needle. 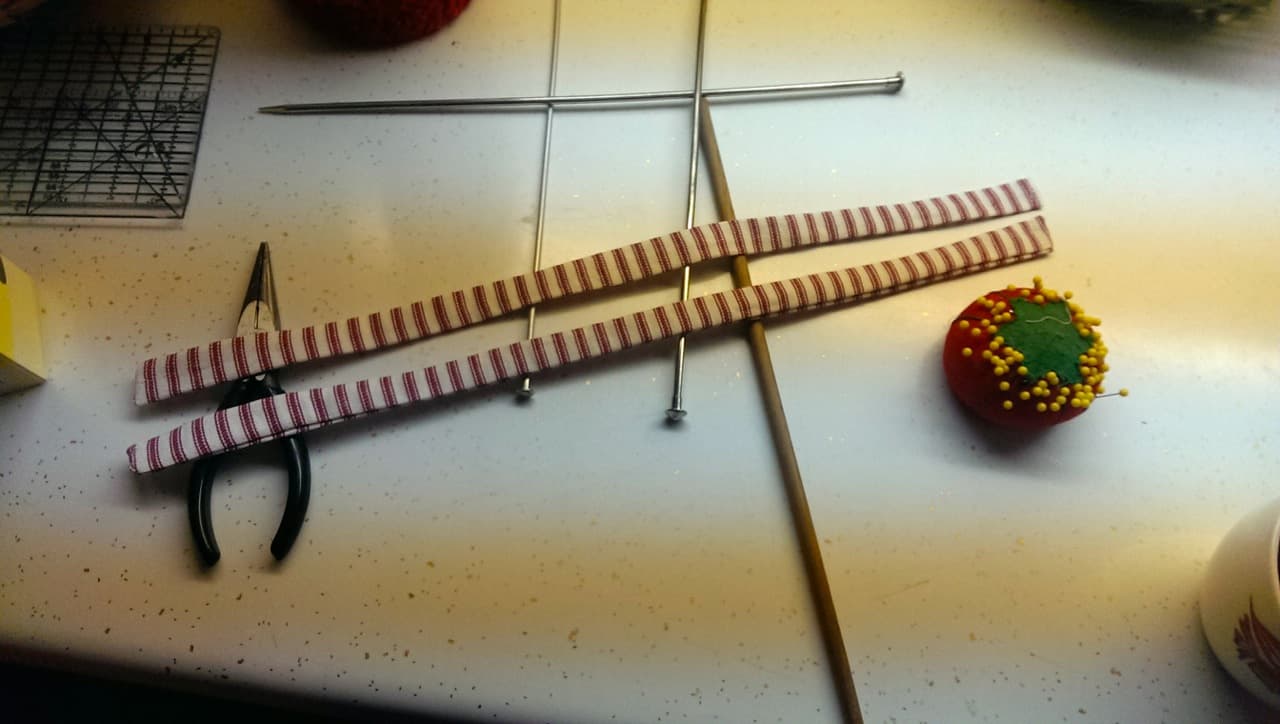 With the red curtains and the striped curtains sewn together, I hemmed one of the original panels so that it would just touch the top of the baseboard on the smaller window. Then, I took my creations home to iron ‘em out and prep them for hanging! You can see the white thread on the back, but it’s unnoticeable from the front. 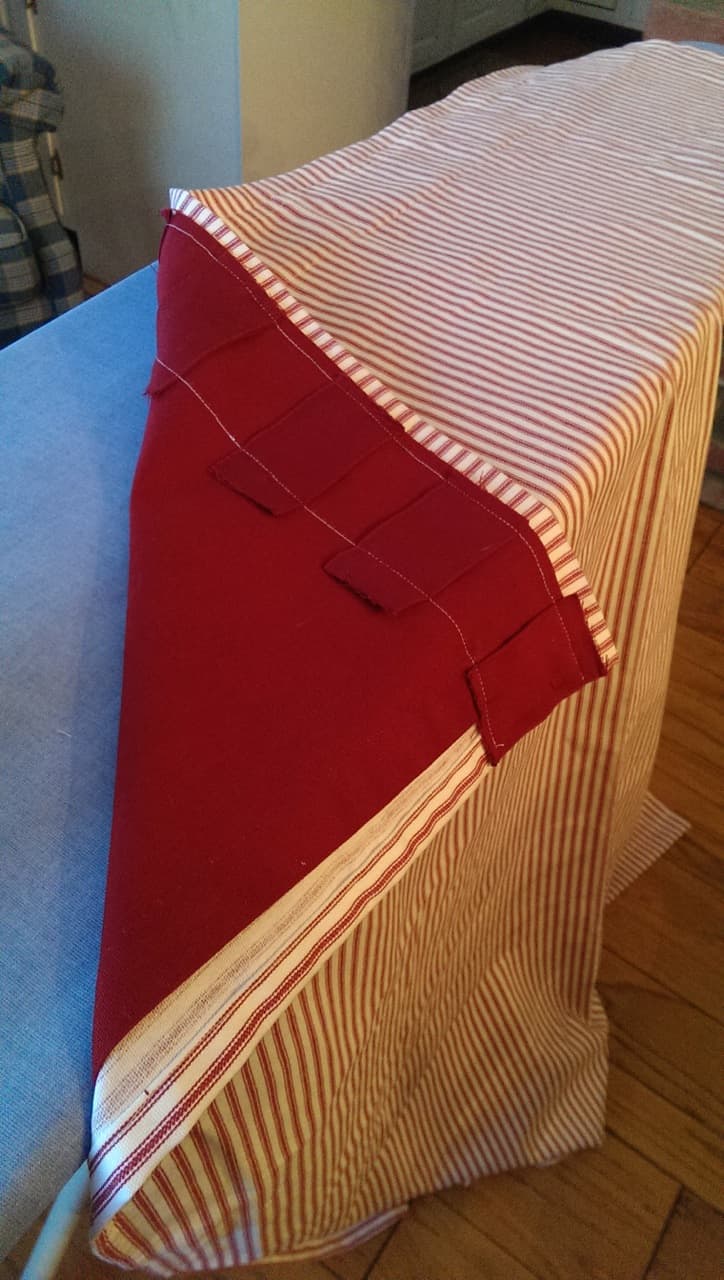 Then, and only then, was it time to hang these bad boys.

I’m in love. I think they look so damn charming. I can’t believe that I measured successfully to avoid blocking any heat from the baseboards. I’m pretty impressed with myself.

Keeping watch as the room slowly comes together? This guy. 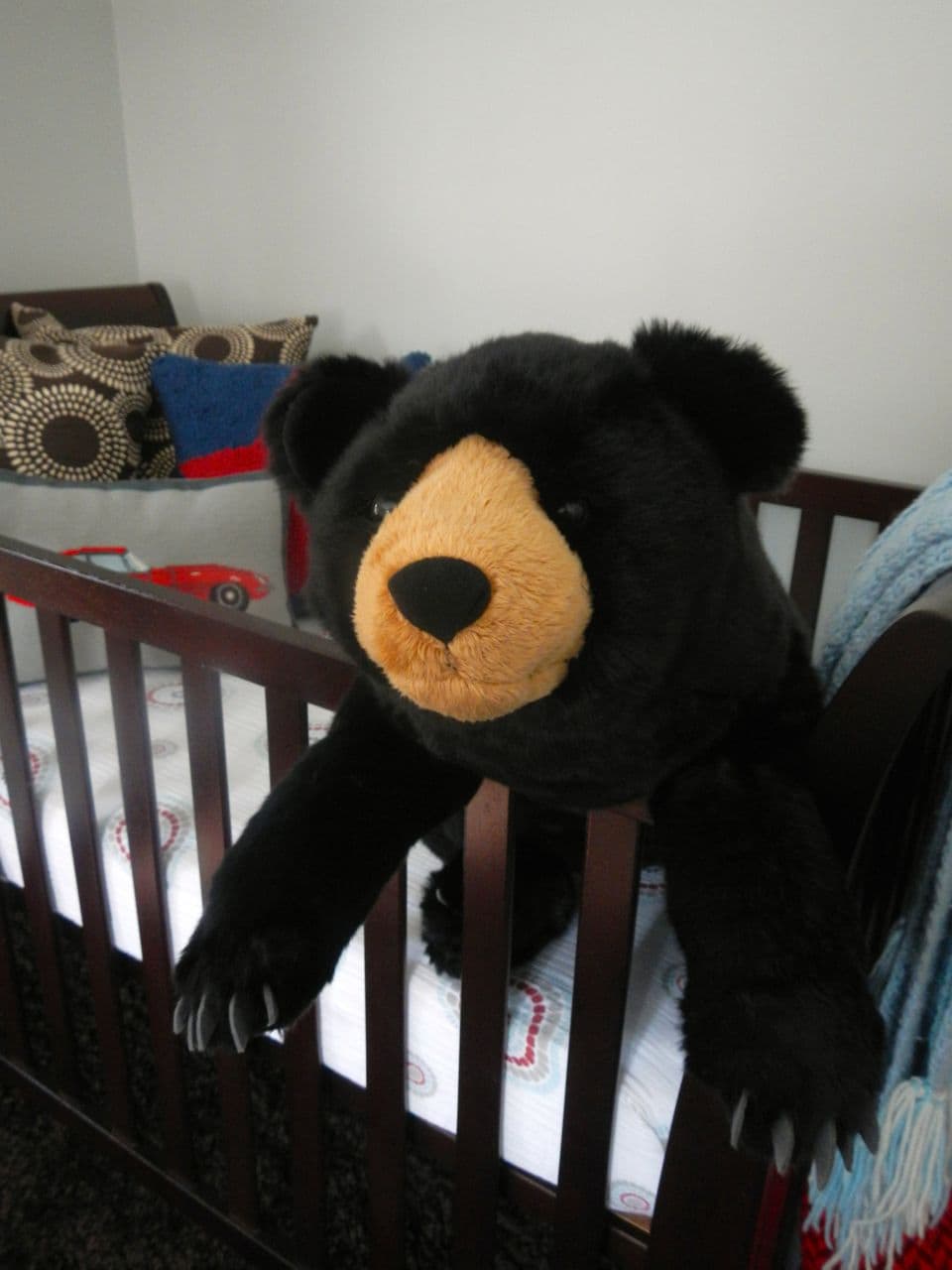 Isn’t he the cutest? My sister Kim gave him to us at the baby shower and we’ve named him General. I love him.

But back to the curtains…one of the best parts? The cost.

$27. Bam. It would have been double the price if I tracked down more fabric and ended up doing the pair of panels, but I’m really happy with the result. What do you think? I’m calling them handsome yet functional. Just how I like ‘em.

Has anyone else attempted to make curtains? How’d yours turn out?

#Decorating #Nursery #Before & After

← Shopping for a Nursery Rug
Showering Me With Love →