I have been enjoying a sweet staycation this week. I have the week off but Matt is working, so instead of taking a trip without him, I decided to get some much needed yard work done. I’ve been meaning to tackle the front gardens for some time now. Back in early April when I fertilized the plants, the rock border around the mulched gardens was holding it’s own. I had been collecting rocks from various yards (all people I know - I’m not a klepto, people) and placing them around the mulched gardens because I liked the look of it. I loved the definition between the grass and the garden, and felt that it had a really natural feel to it.

Well, as some women often do, I changed my mind. As of a couple of months ago, when the grass starting growing rampant and it became a pain in the ass to mow, I grew tired of the rocks. I AM SO OVER THE ROCKS! Matt loves to hear me say that because I fought hard to get those rocks down and he wasn’t into them at all. Every time I brought a few more rocks home from my mother-in-law’s, he would give me that look. You know the look… the “you are so f***ing crazy but I love you anyway” look. Matt would probably also want me to tell the blog world (or all 3 of you that read these posts) that instead of weed whacking around the rocks, I got down on my knees and trimmed the grass around the rocks. It’s sooo true and I’m not ashamed to admit it. My husband loves to tell this story because he thought there was NOTHING funnier than my kneeling on the ground and “cutting the grass with a pair of scissors.” They were NOT scissors, but “professional gardening shears” and they worked beautifully for a meticulously maintained look. Or a crazy person look, depending on how you look at it.

I digress. Back to my gardens. When we moved in, the curb appeal, or rather the lack thereof, looked like this. There was no landscaping at all besides for 2 overgrown non-descript evergreen bushes on either side of the stairs. 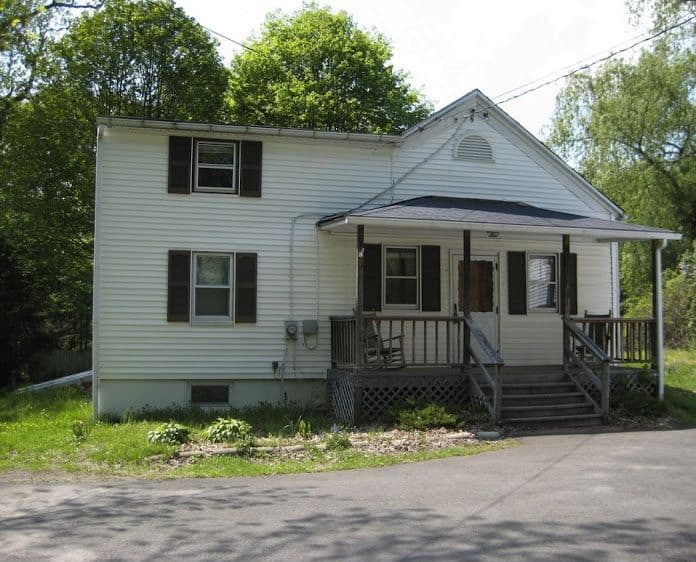 After about a year, we had it looking a bit better… 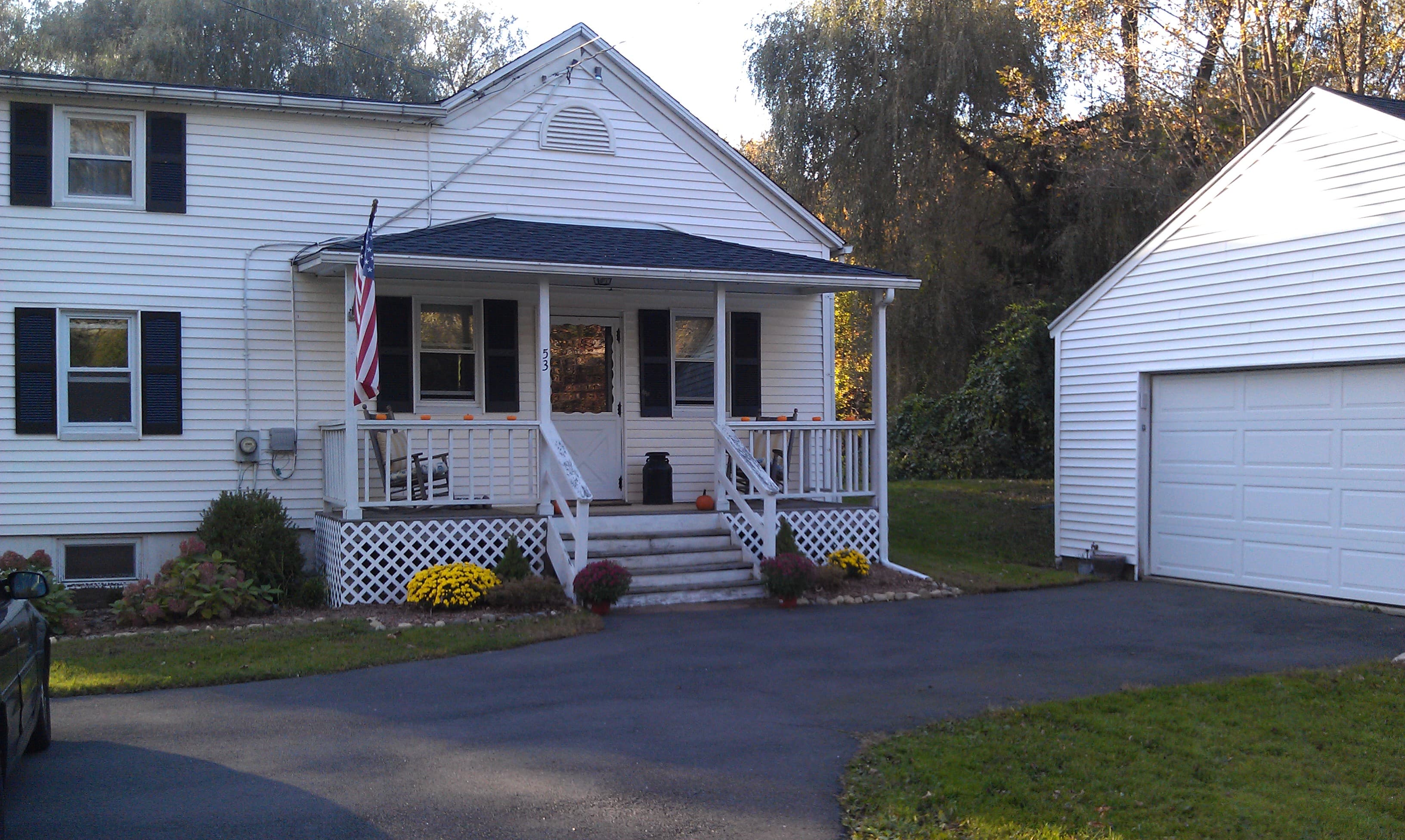 Freshly painted shutters, a few coats of white on the deck railings and new lattice will do that to an old house. Although you can’t see much of it in the picture above, the landscaping is, in my humble opinion, the icing on the cake. Just look at those rocks in their PRIME! Bam! So beauteous. I loved them once, but everyone has their time. Because it was so hard to mow and my “professional garden shearing” was drawing such snickers from the audience, the side of the house was looking like this… eeeek! 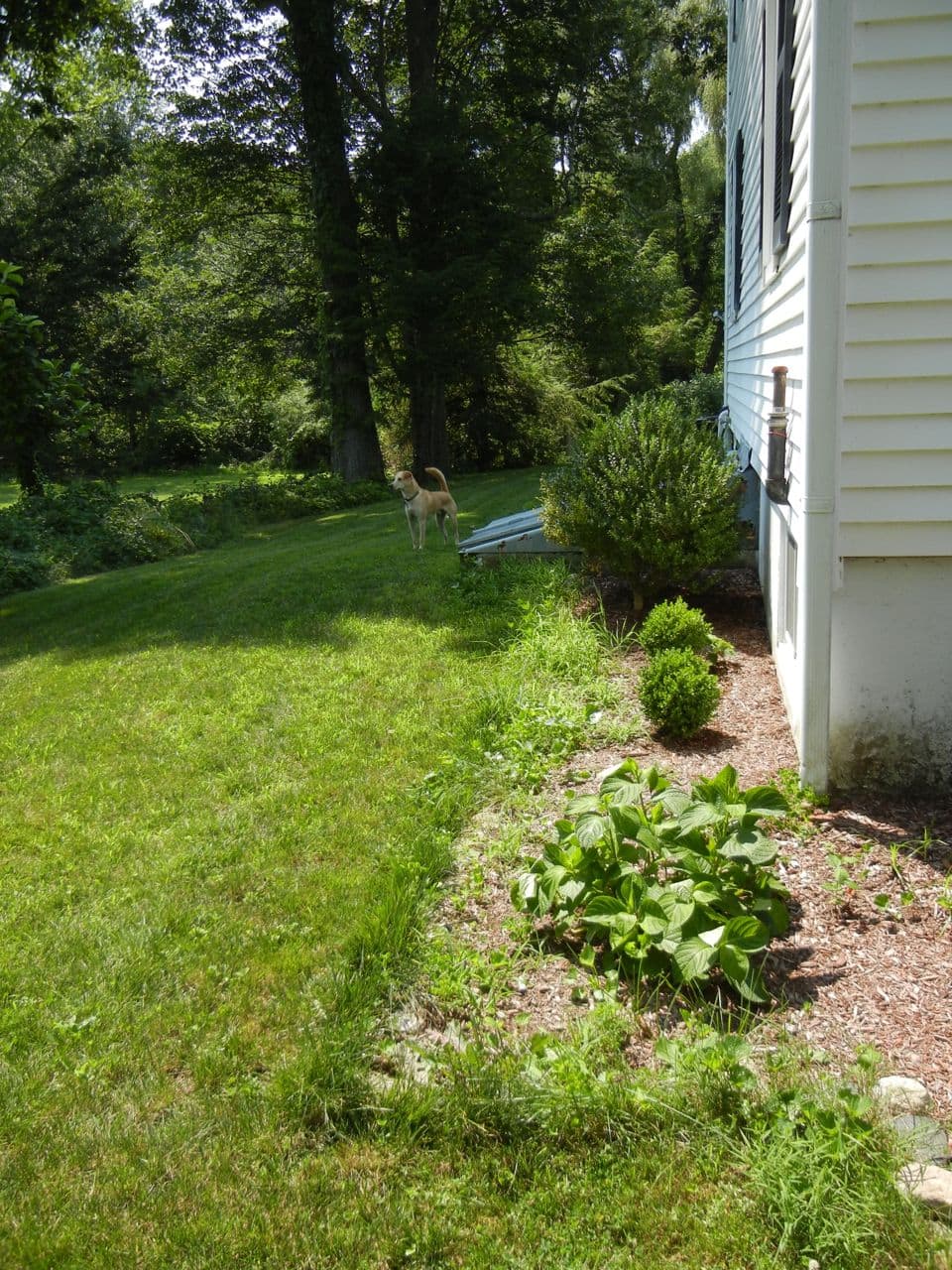 The rocks are overgrown by unruly grass and weeds, and there were weeds all up in my year-old mulch. Here’s a close-up of the hot mess that was the side of our house. 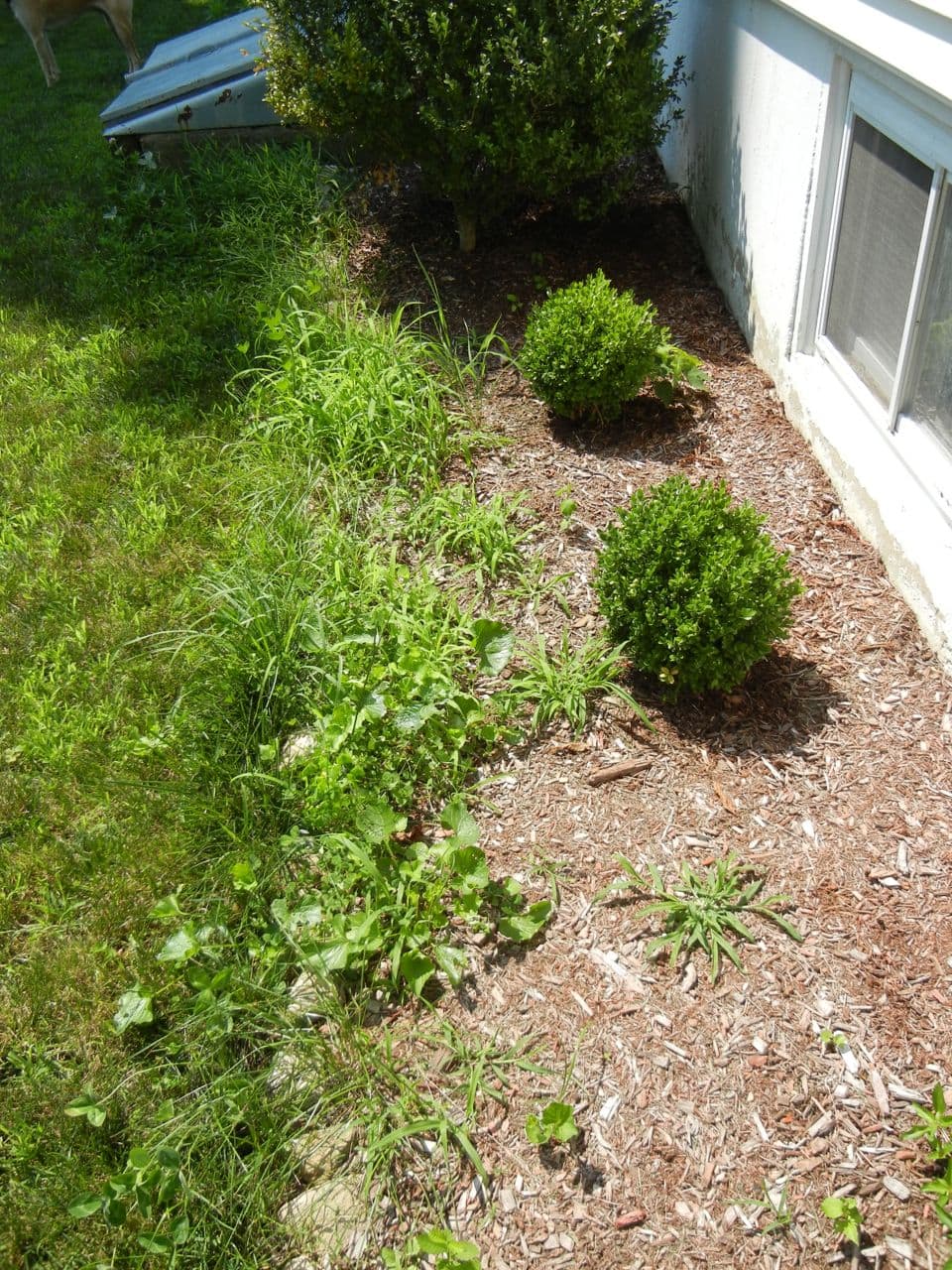 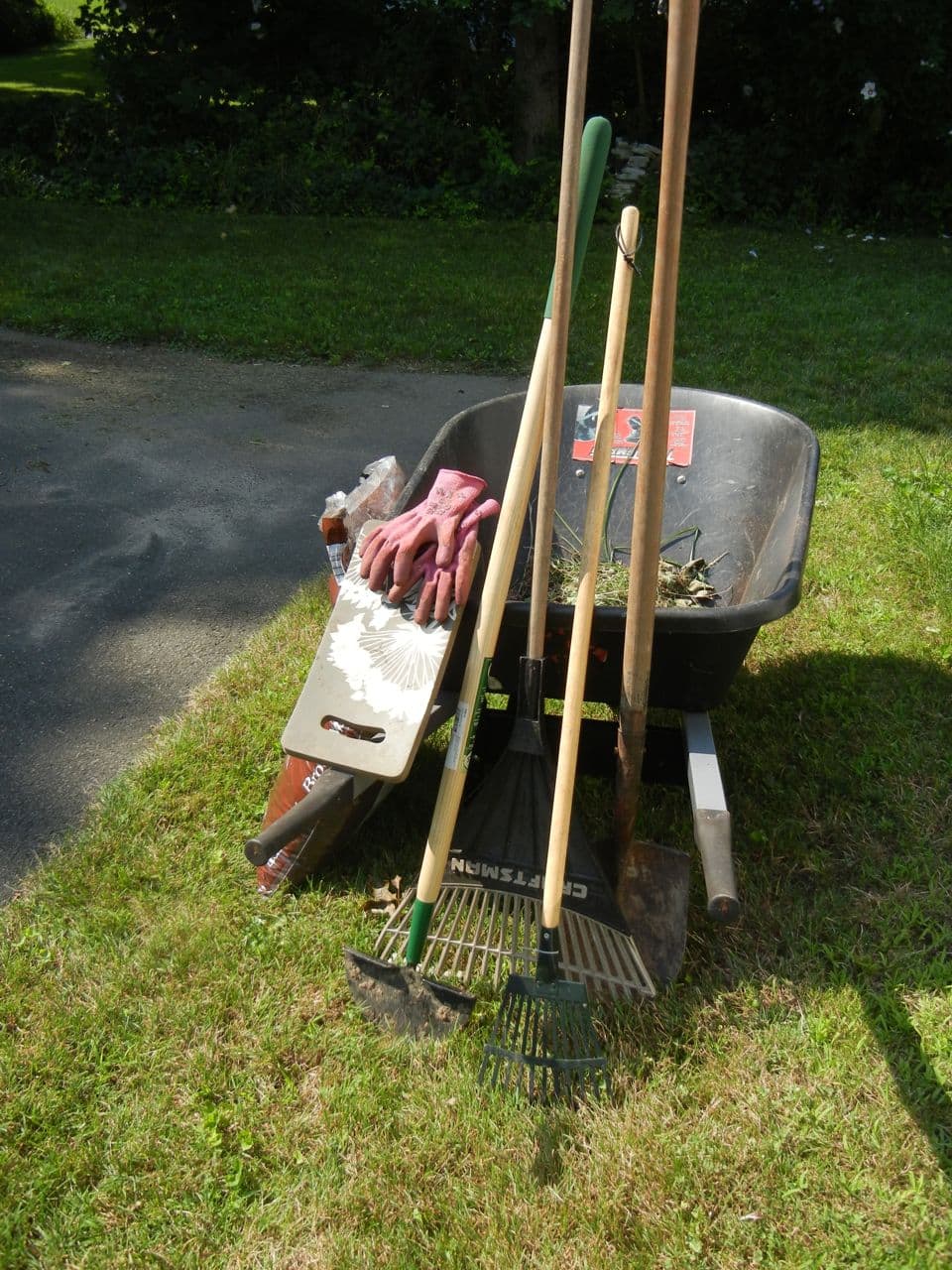 After I took the rocks out and mowed down the large weeds, it looked like this. 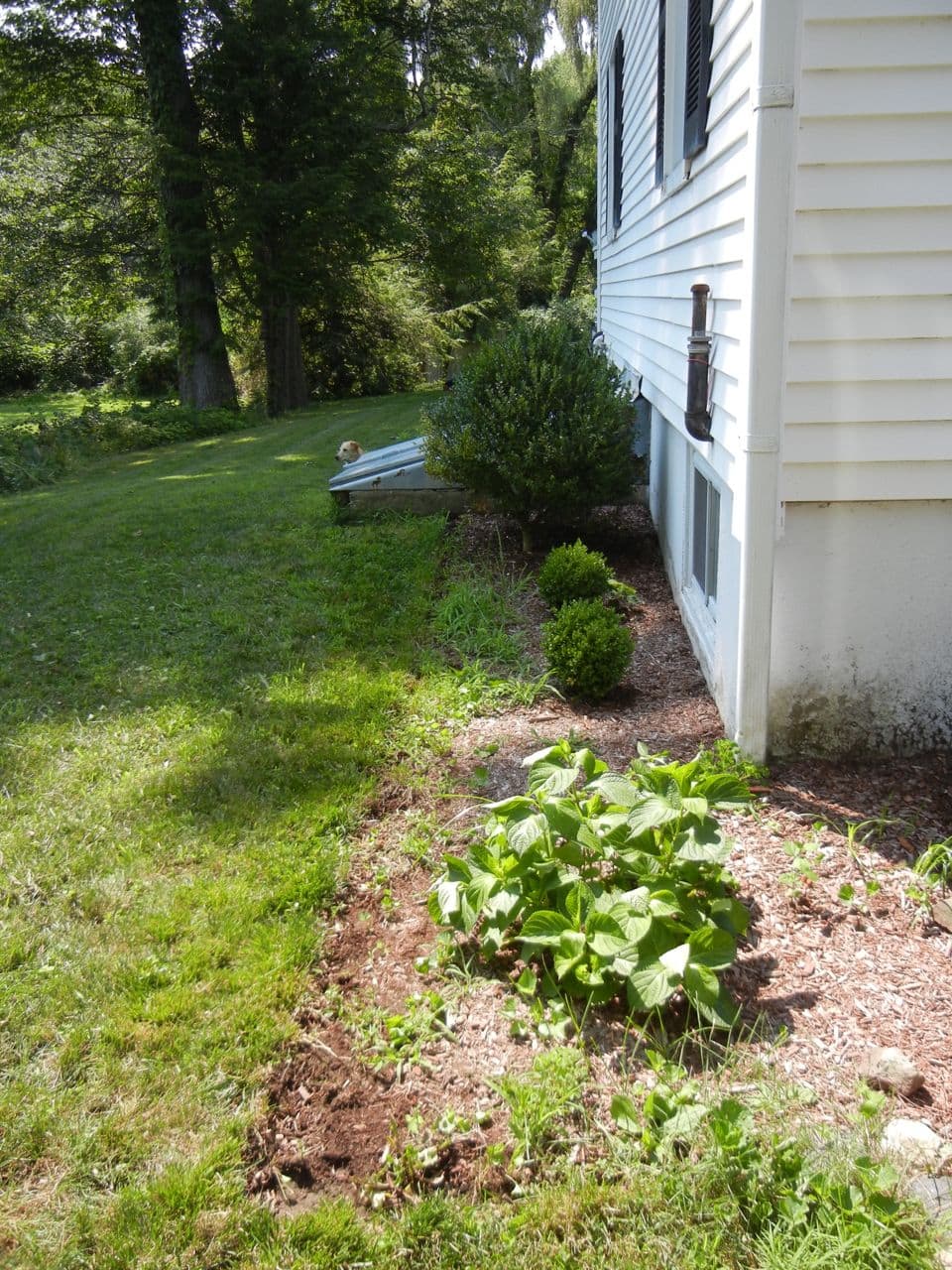 Then I got my weeding on and it was looking much better already! 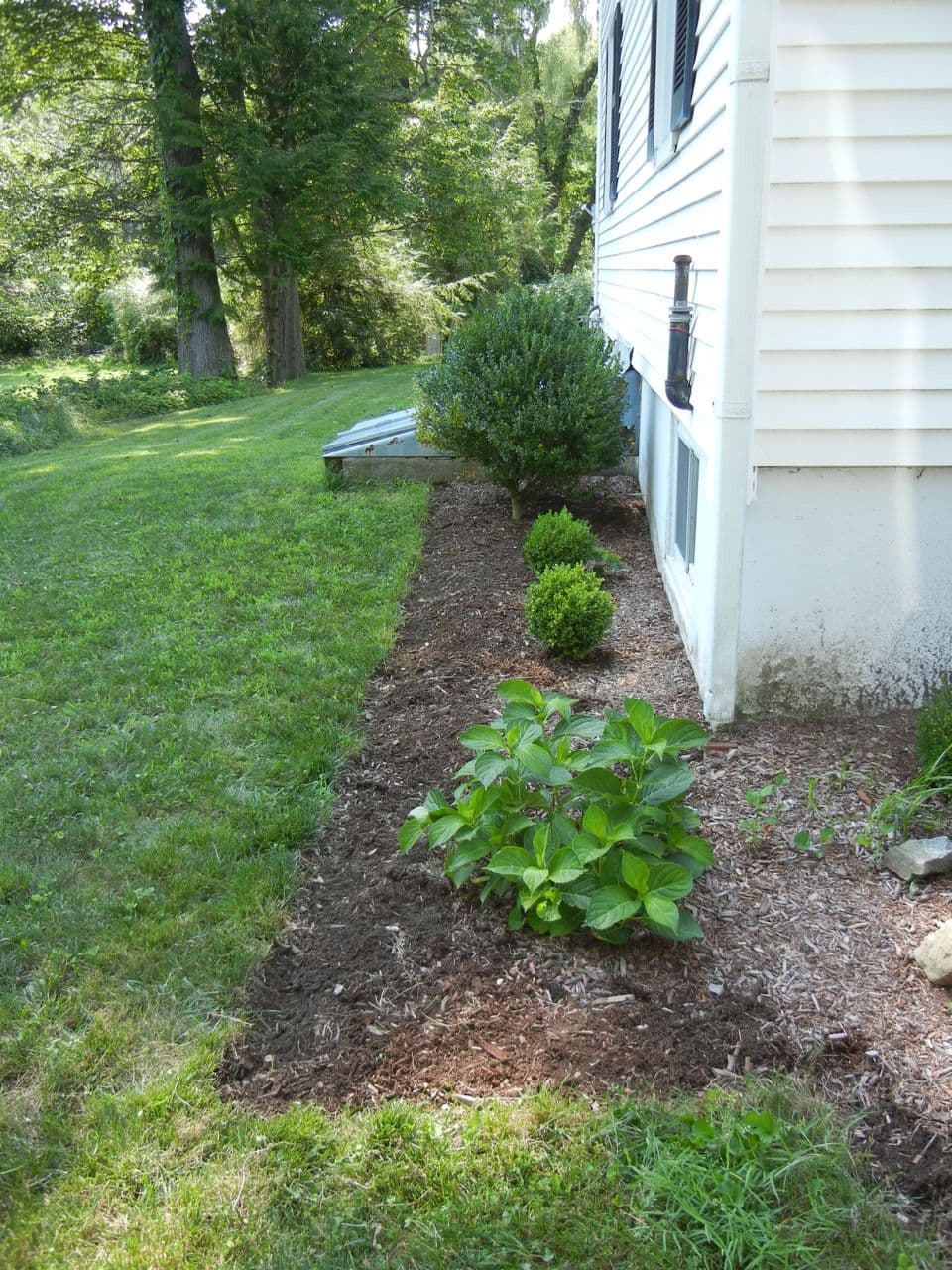 I even found this guy hanging out. It’s hard to see because his camoflouge is that dope. 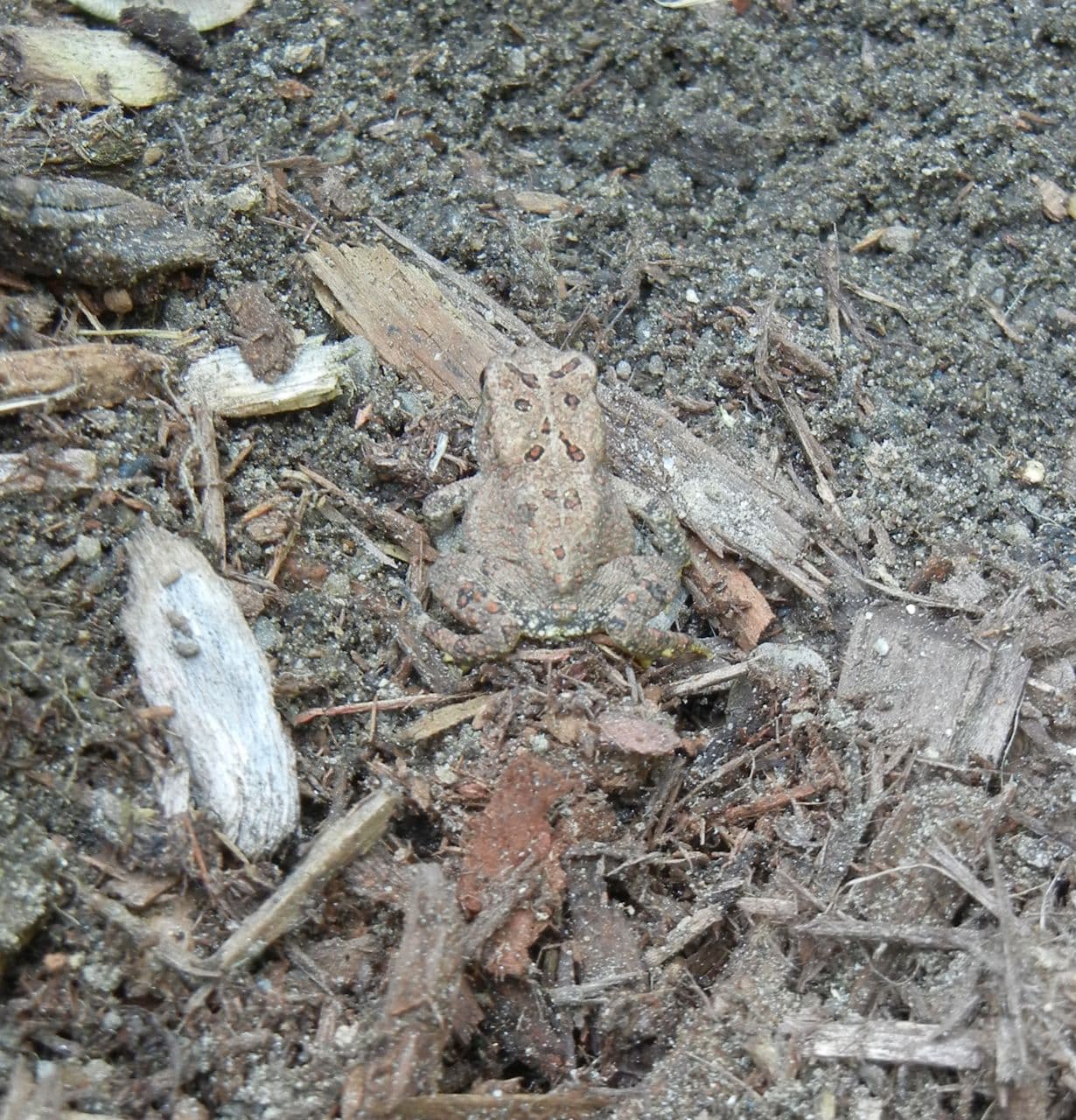 After the weeds were all out, it was time to edge. Back in May, we bought an edger at Home Depot for about $20 bucks. I like to edge because it creates that delineation between grass in mulch that I was so desperately going for with my now defunct rock border. You just throw your foot down on the edger and then whip it forward. How’s that for technical wording? 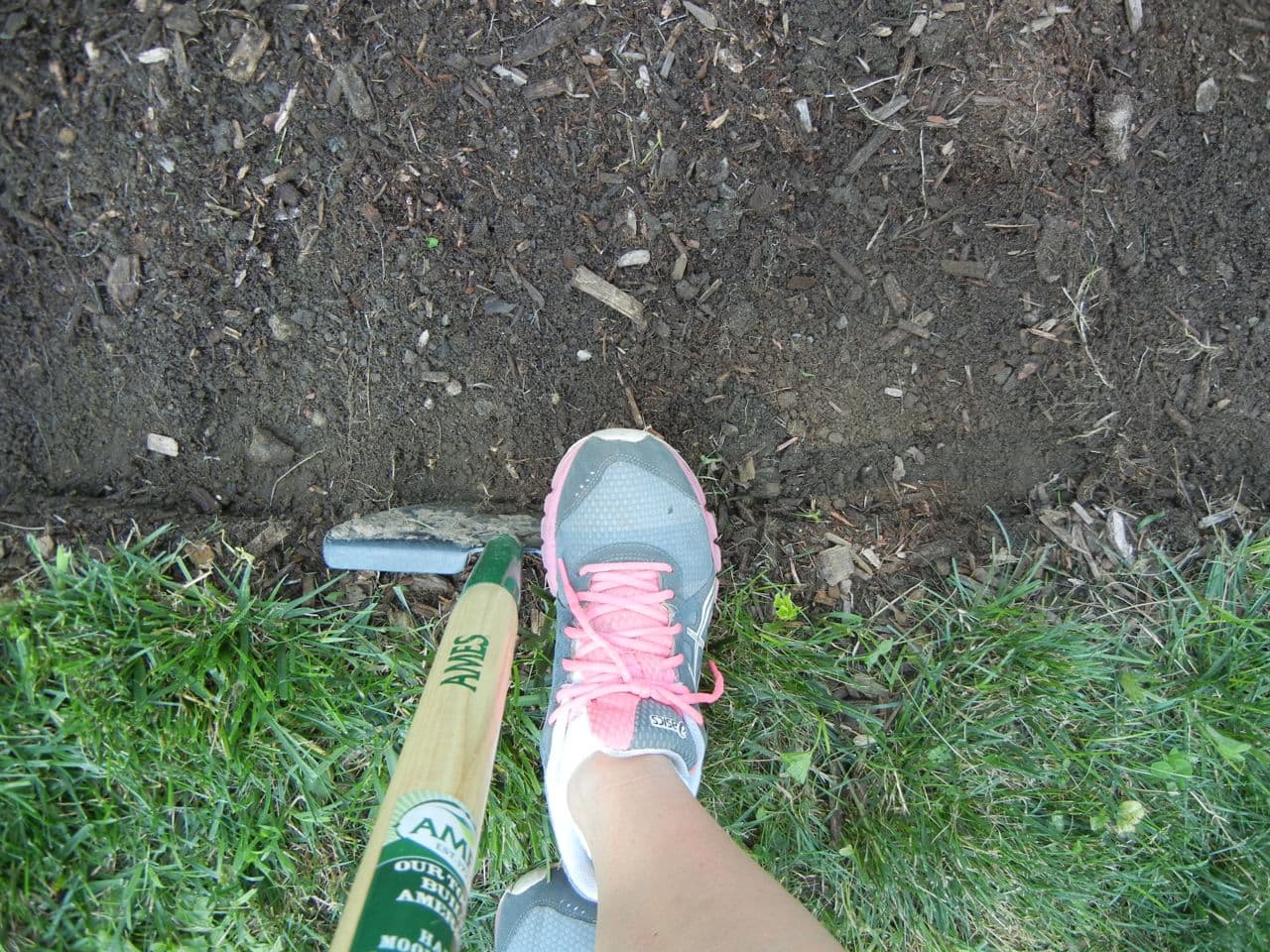 The edged garden revealed a sweet bed to throw mulch onto… 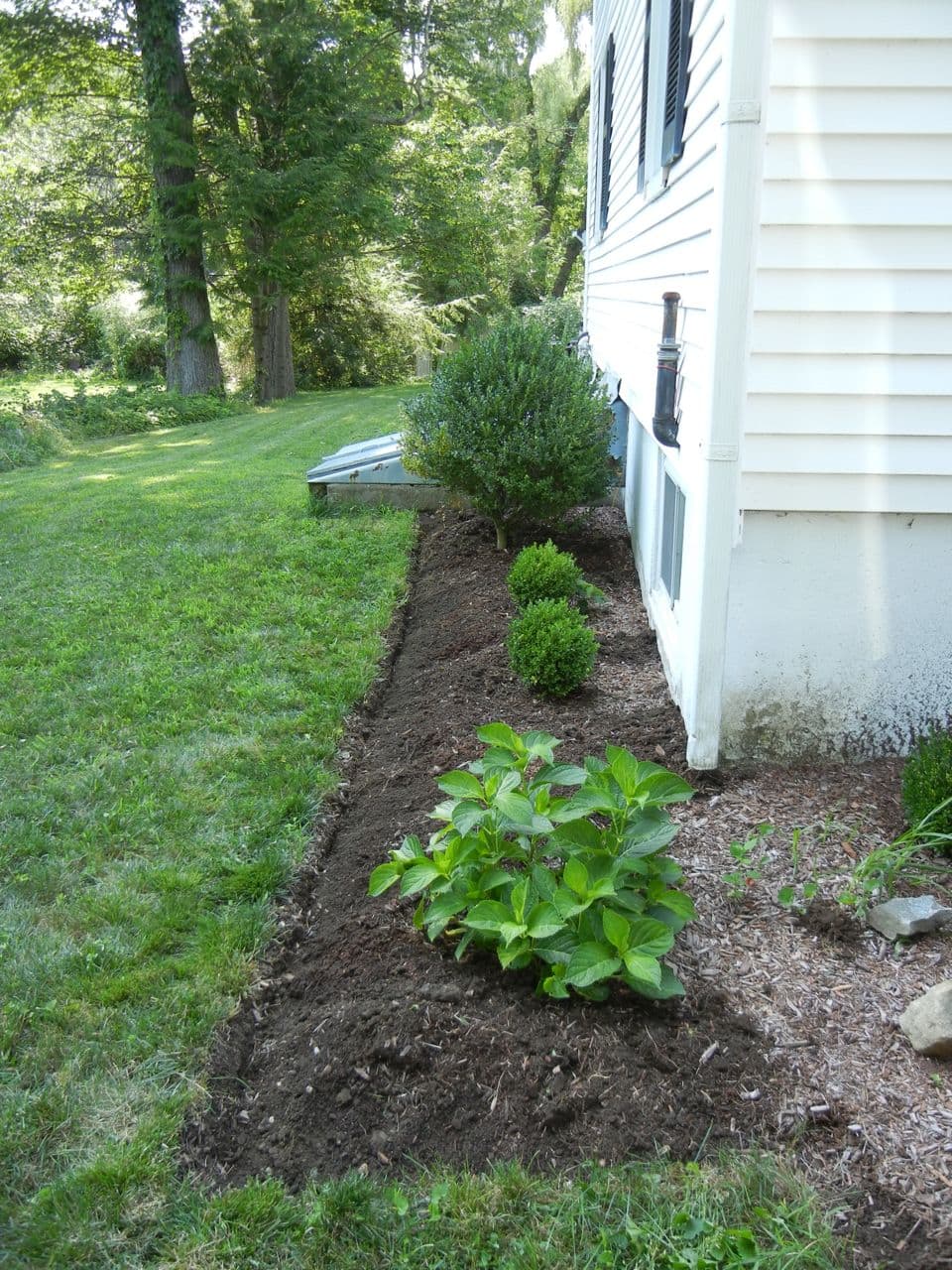 Which is hands down my favorite part of the process. SO rewarding to see it neaten up so perfectly. 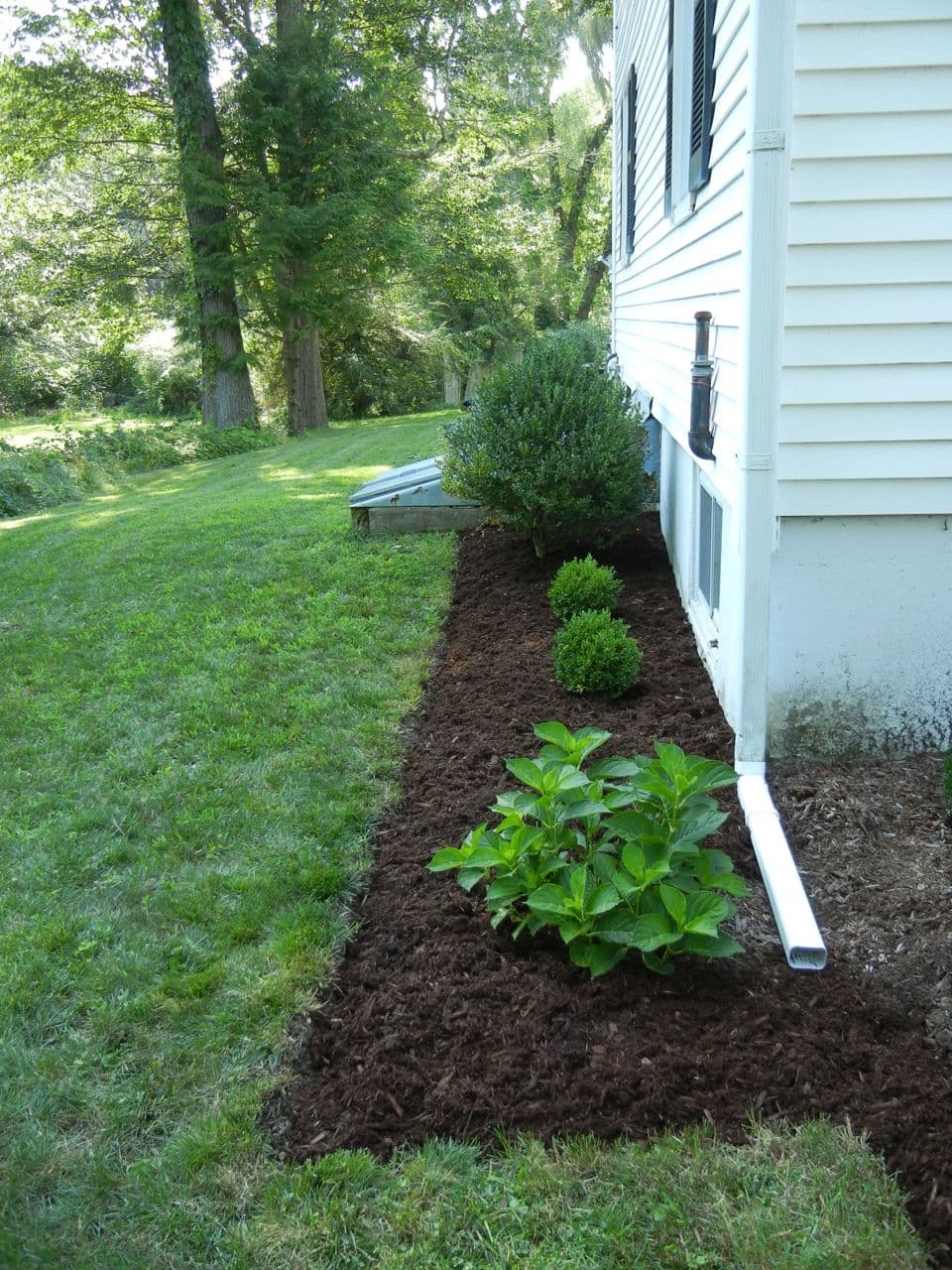 Ahhhh. No more mess and it is infinitely easier to mow and keep neat. It rocks. Without rocks. One point for the reformed rock addict. I quickly moved to the front of the garden (to the right of the strip I just tackled) and followed the same steps as above. Removed rocks, (tear) mowed, weeded, edged, mulched. It’s a winning combo as seen by the pictures below. Here’s the before: 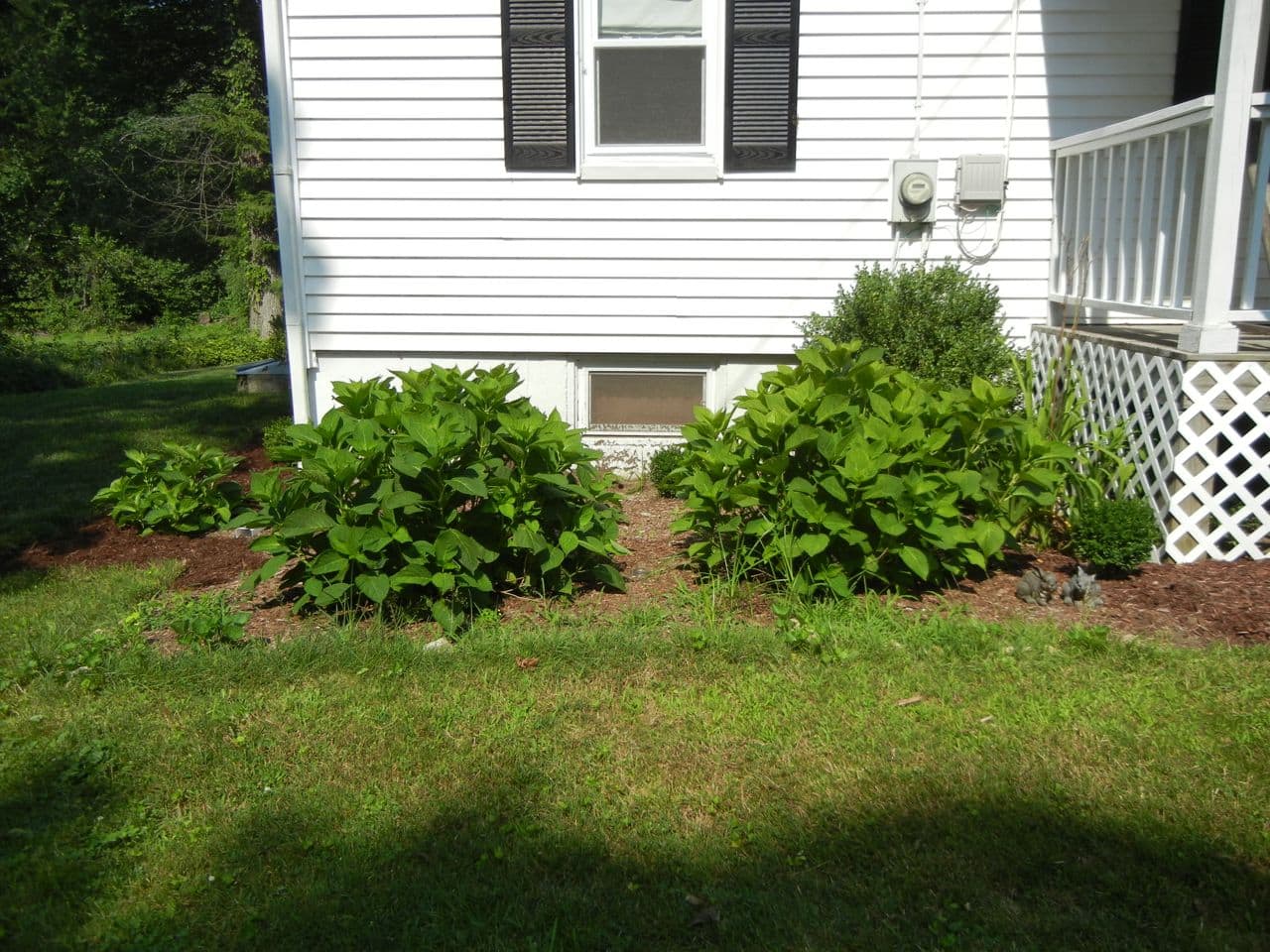 And the after shot, after the 5-step process :) 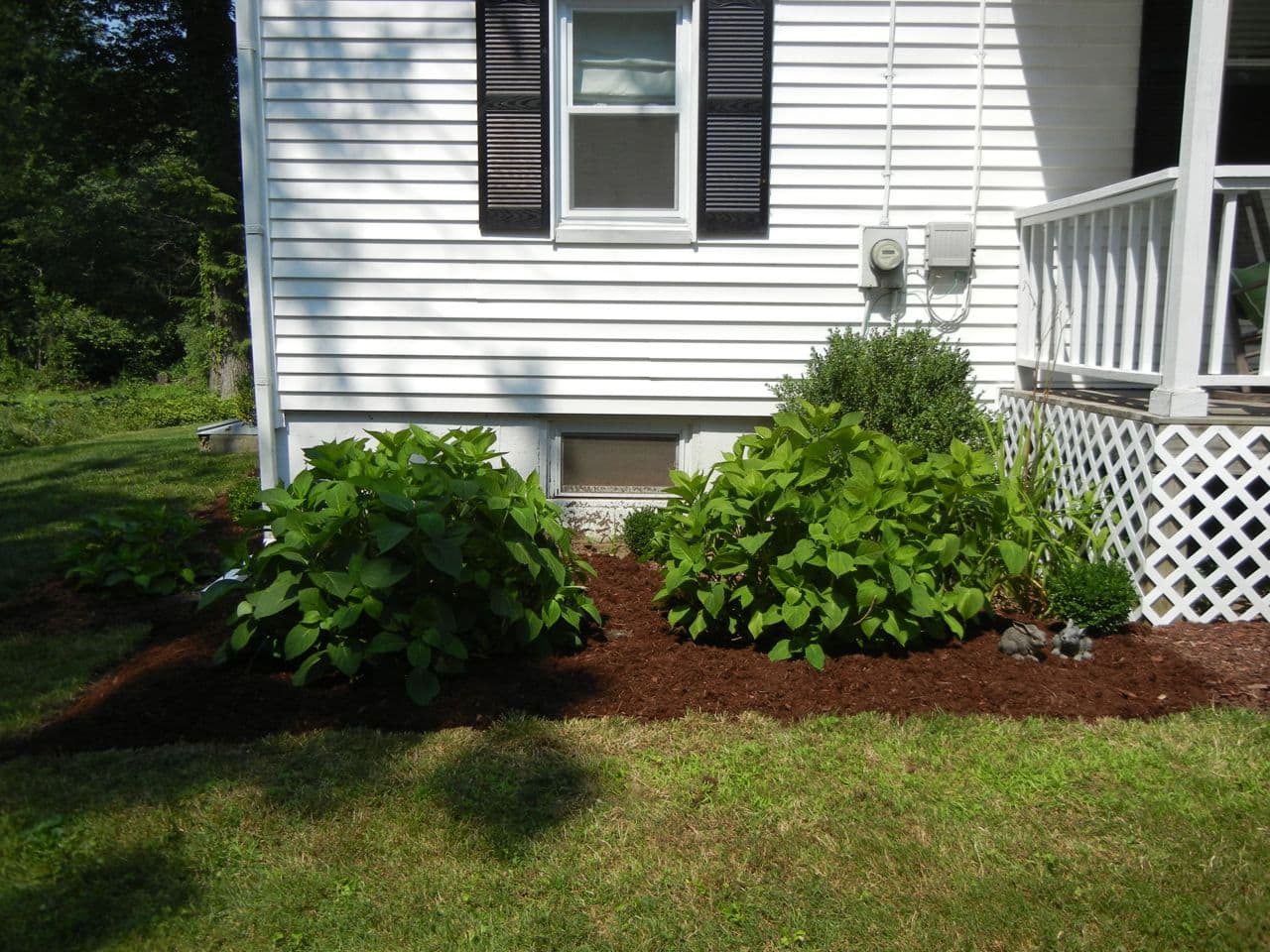 It looks so much better from the street. And from the porch. And from the side yard. And in my brain. I am in love. The plantings will always be a work in progress as I add more each year. I’m constantly trying new plants to see what works with the lighting, what the deer will eat, etc. I pruned my hydrangeas (the two big plants up front) too late last year, so this year I have no blooms. It makes me cry. Gardening is a learning process for me, and I get better every year and I love my garden more each year. I NEVER look back on old pictures and say “oh wow, that looked great.” There is always room for improvement, no matter how rocky things get :)

#Before & After #Garden #Summer