Even though painting over your head is the worst painting possible, I decided the porch ceiling was way overdue for some new paint. I even threw it on my 2013 House Goals. I’ll try to revist those next week to check on the progress because we are nearly 75% done with 2013.

The porch ceiling was in really rough shape. The paint was chipping, there were mud dauber nests everywhere and an outdated, neglected light fixture was the cherry on top.

In other words, it was beginning to look like a haunted porch instead of the clean, pretty and neat first impression we normally try to make with our attempts at curb appeal.

At first, we tried to peel it off with a paint scraper, but the tool wasn’t really doing a great job, despite the name. I mean really, dude, you’re called a “paint scraper.” You kind of have to own that.

Instead, we decided that a combination power wash and scraping would be our best shot at creating a surface that would readily accept new paint. 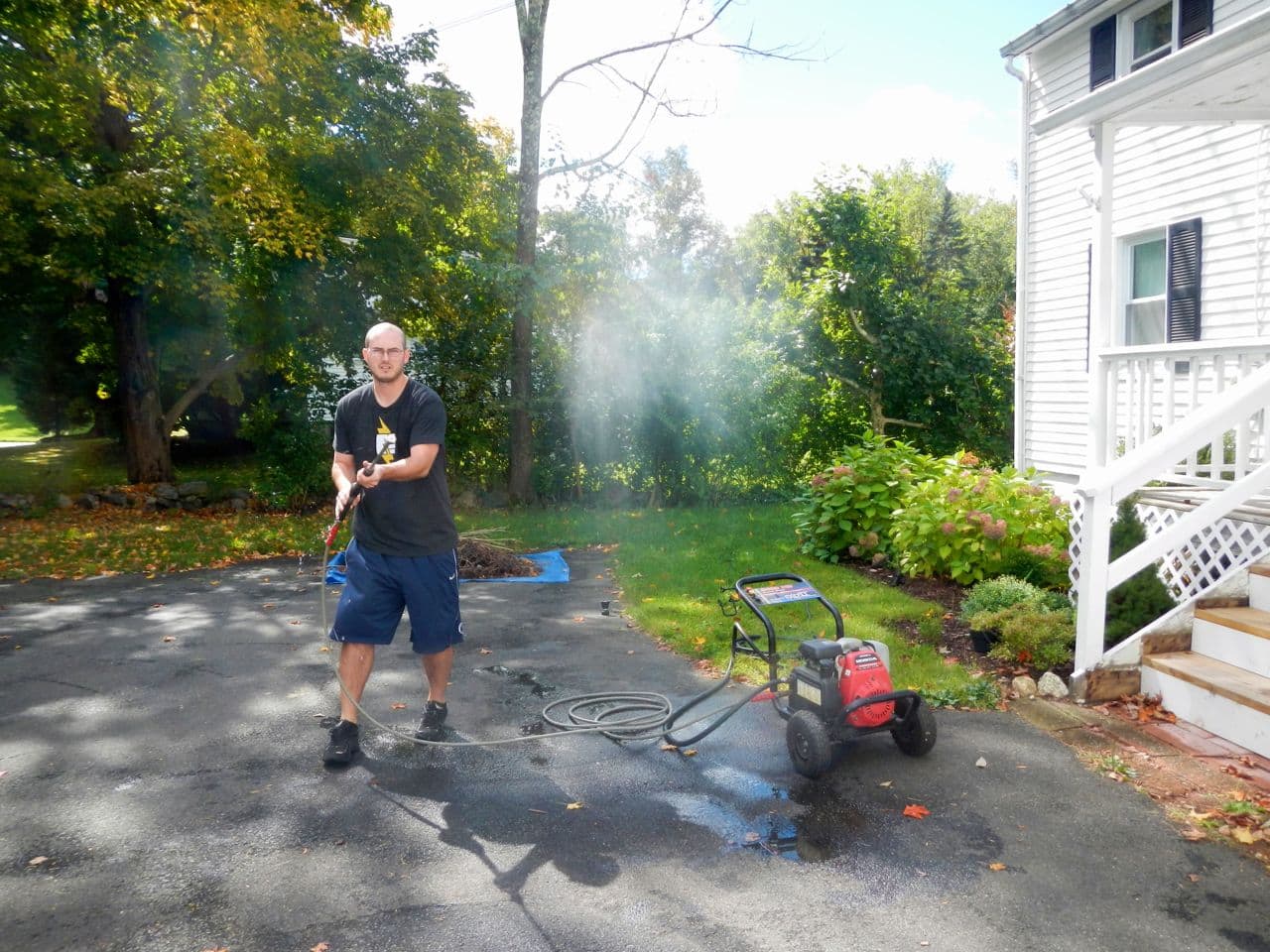 We already owned the pressure washer so we didn’t incur any cost in renting one or buying a new one. We mapped out our plan of action so that we didn’t unecessesarily waste our precious well water. Matt started out in his shorts and t-shirt. 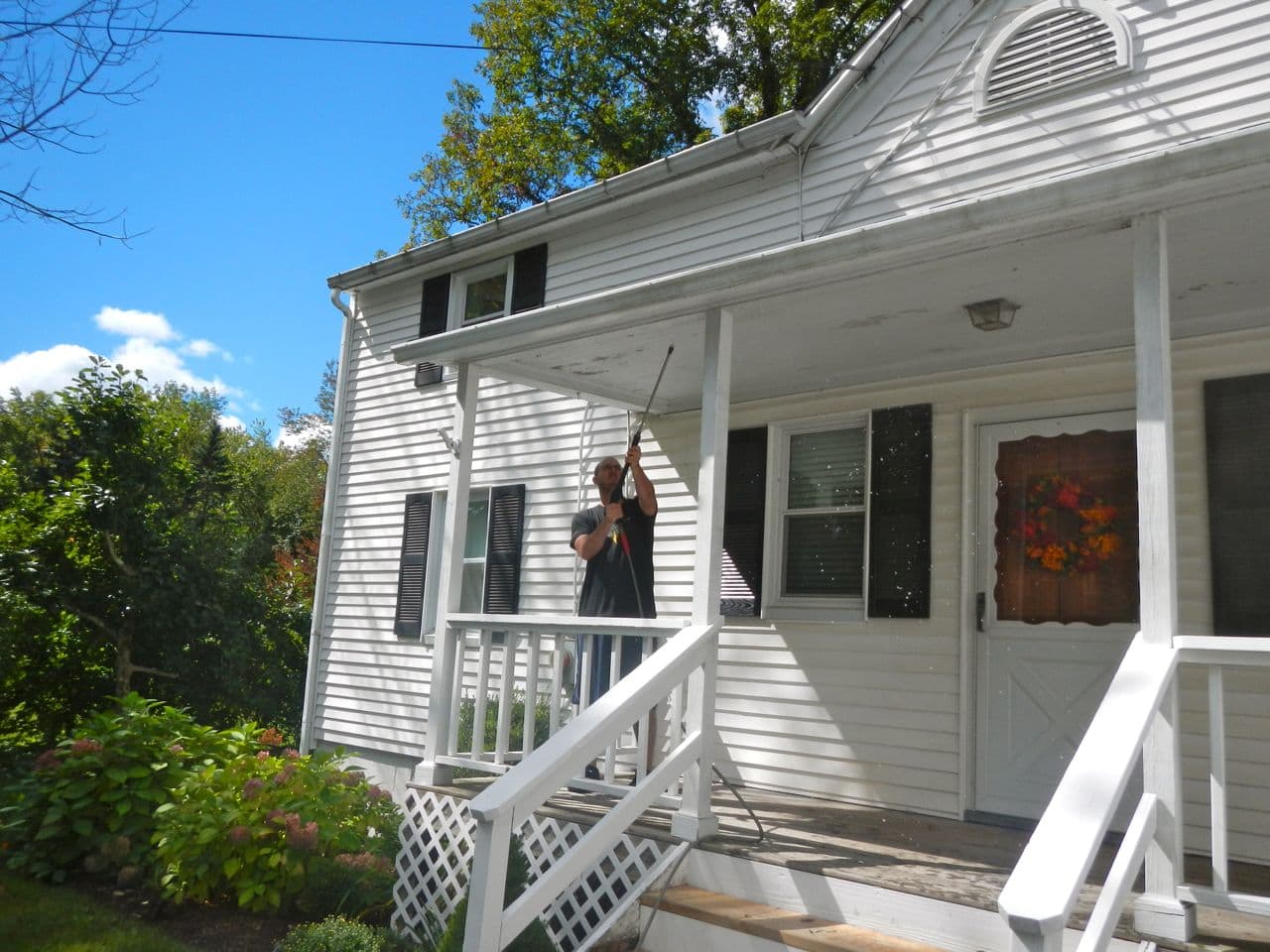 He ended up in his rain coat. Can you check out our light fixture one last time? It’s horrendous. I’ve lived with that thing for 4 years. It’s amazing, really. 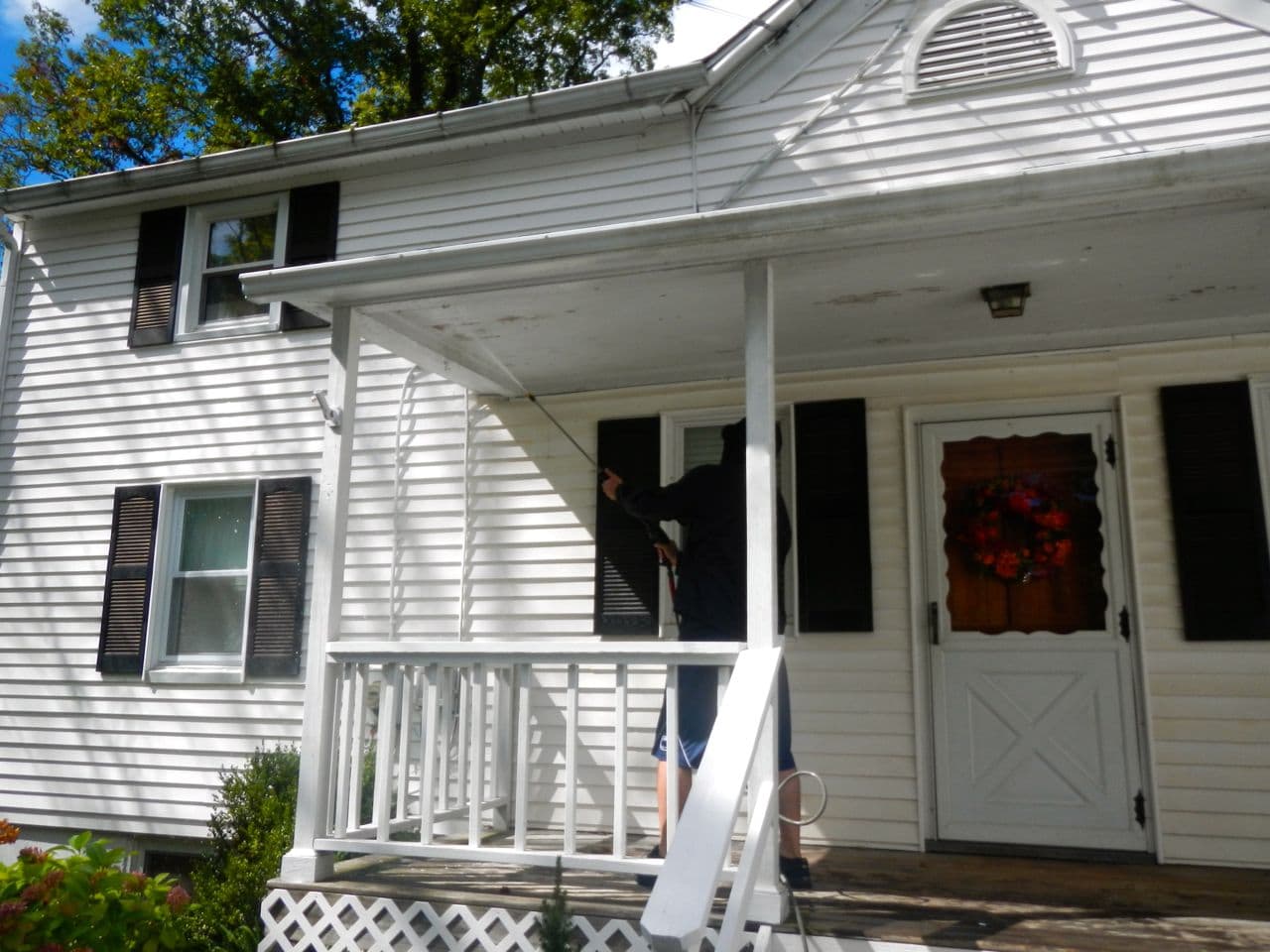 Starting in one corner and working systematically down the porch, we got it all done in a matter of ten minutes. I’ve been saying “we” this whole time but it was really all Matt. I was watching though, so that has to count for something, right? Right?! 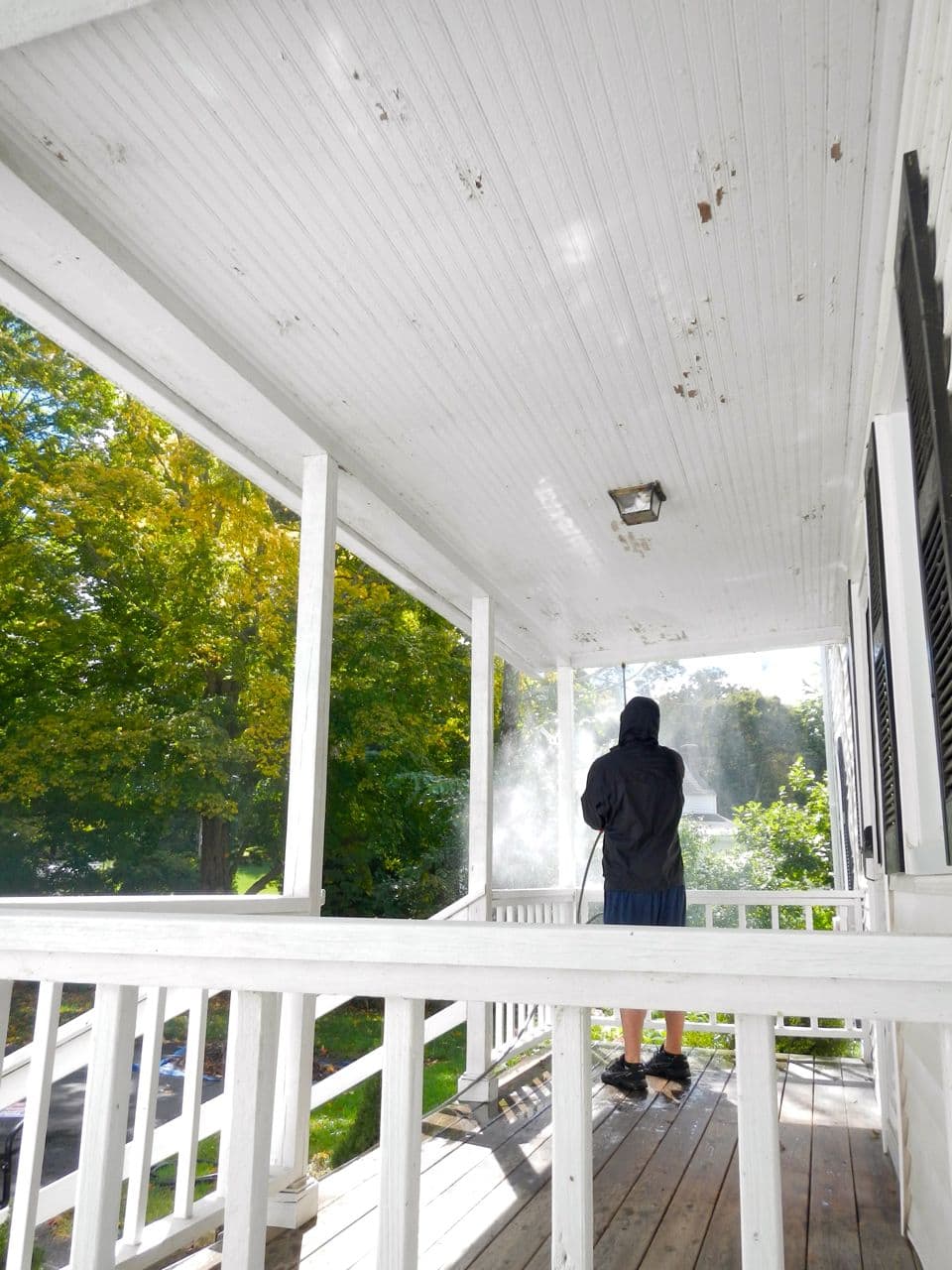 I’m giving it a few days to really dry out, giving me time to decide if I want the ceiling white or a soft blue like you often see on the underside of old porch ceilings. What would you do? 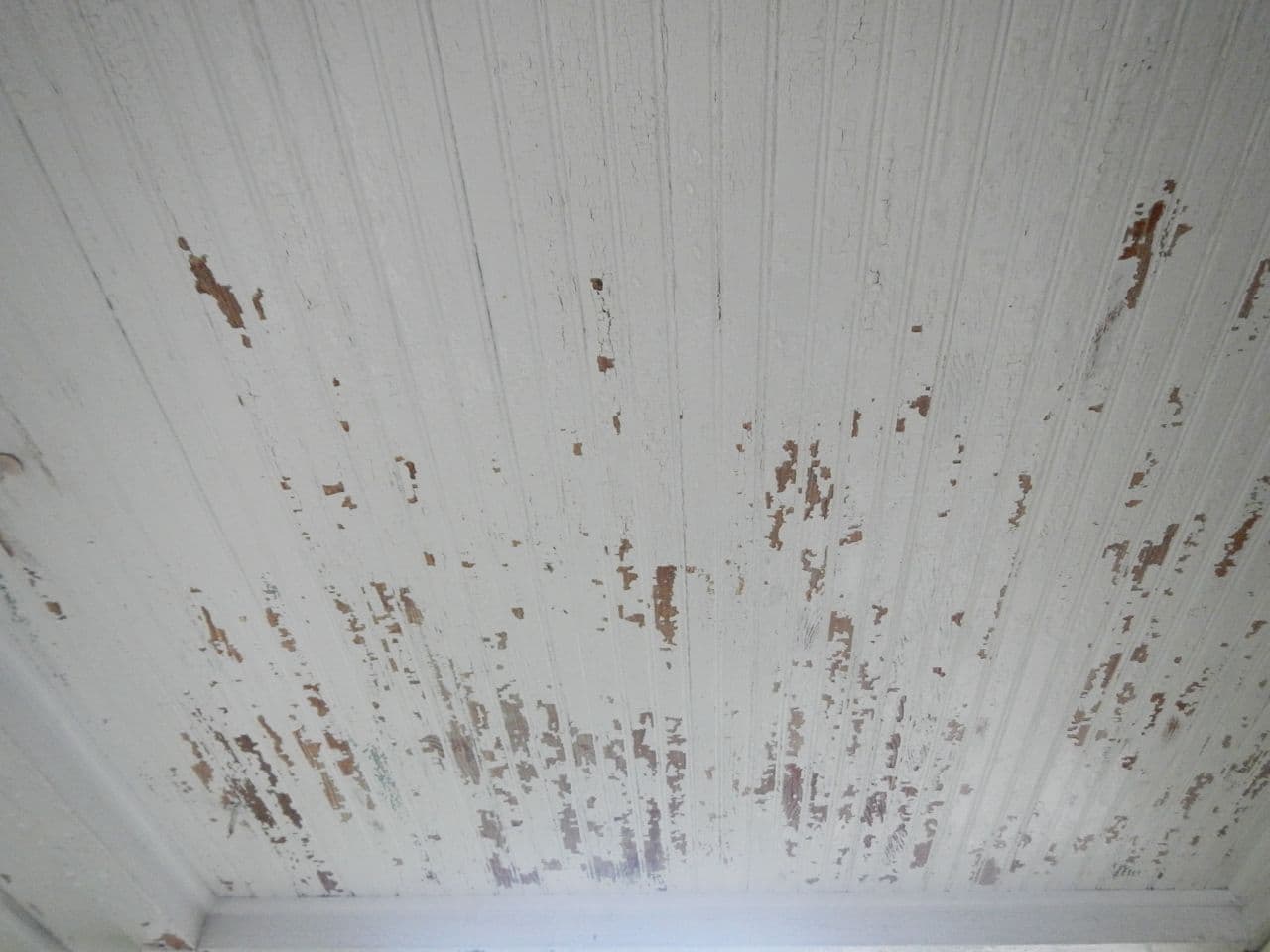 I’m planning on starting with the trim along the outside, saving the inside for last, so I have a few more days to figure it out. Then it’ll be time to shop for a new light. Thank. Goodness. 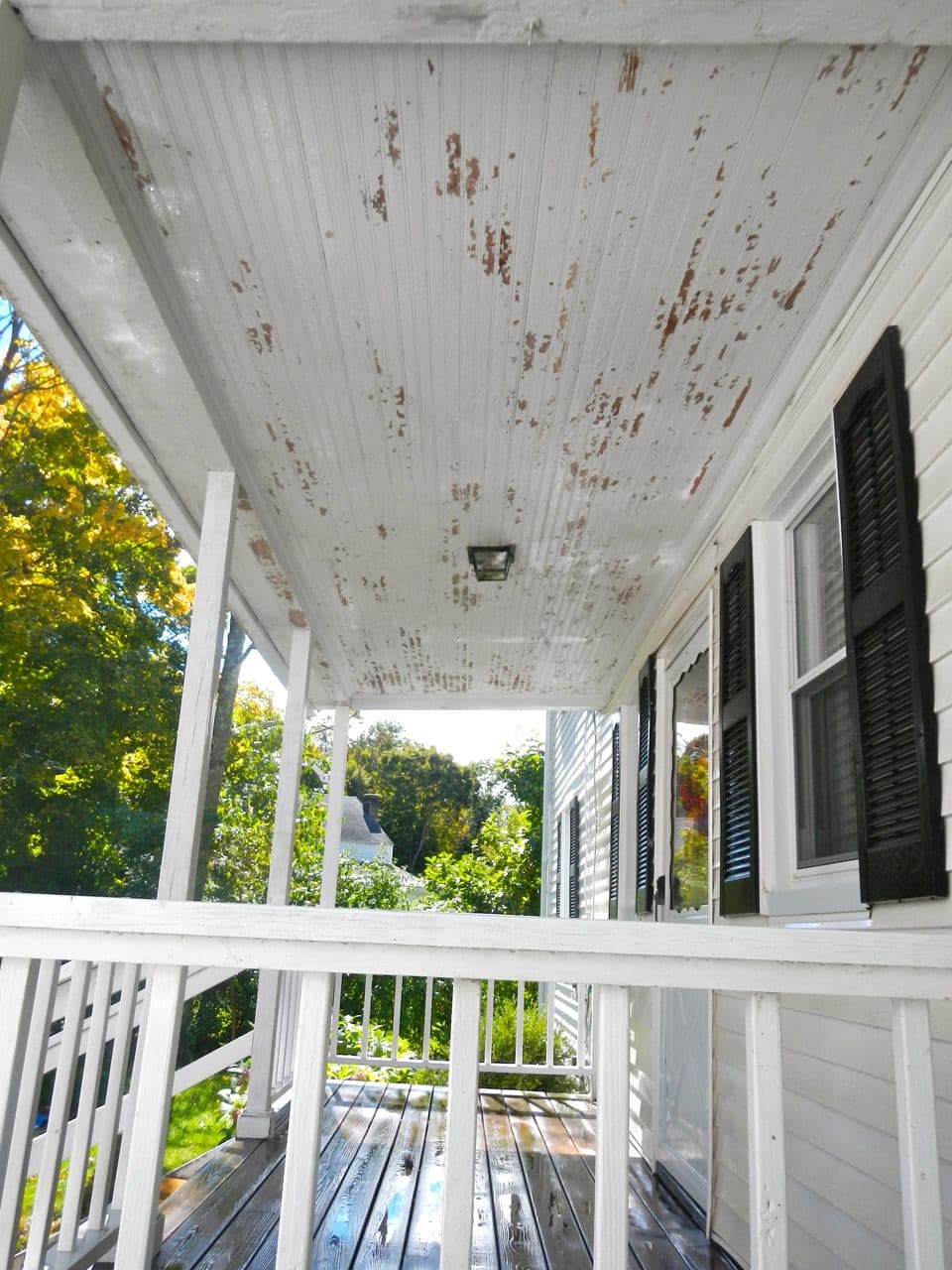 It’s amazing what a pressure wash can do. What would you power wash given the chance? They’re awesome.

← New Office Bling
Neurotic Nelly and Why I Need Kids →