Since Halloween is right around the corner, I thought it was an appropriate time to share the top five “spookiest” (read: top five grossest) things that have happened in the five years we’ve been in this house.

A warning before you continue reading… some of these are really gross. As in, reeeaaally gross. Blood, fangs… Okay, that’s your warning. Stop reading if you can’t handle it. Oh and by the way,** there are pictures**. So maybe you shouldn’t show your small child. Also, some of them are longer than others so grab your coffee.

1. I was doing my morning walk from the bedroom to the tea kettle when I let out a scream. A real, horror movie-esque scream. I glanced at Griffin’s water bowl to discover a big gray mouse drowned in the water. We live in a really old house and we’ve had mice in the past, but they were always in the garage or behind the walls… never in our living space. Needless to say, the mouse traps were a bit more aggressive that year.

2. On my way up to get the mail this October, I was hit with a nasty stench before my eyes identified the culprit. A car had hit and killed a local black cat, and its final resting place was the top of our driveway. It was dark when Matt got home, so we left the absolutely disgusting task of clean-up until the next day. That night, an animal dragged it into the thick brush and we were a bit relieved because hey, maybe it would naturally decompose. It didn’t. The smell worsened. Something dragged the cat back out into the open that night and our neighbor ran it over a half dozen times, flattening it as if it were a scene from a cartoon. Bones, blood, stench, pieces of fur… gag. A BBQ we hosted finally served as the impetus to get going, and Matt scooped up the poor, neglected creature and tossed it deep into the back woods. RIP Kitty.

3. This one deserves a post of its own… maybe that will happen one day… A few years ago, Matt was in the city for a conference. My parents came up to help me hang some Christmas decorations. Upon entering the house, Dad casually asked what was sticking out from behind the siding near the front door. I told him I thought it was a leaf and that it had been there for months. Well, call it a father’s intuition paired with a daughter’s neglect because when he smacked the siding with the back of his hand, the “leaf” started moving…ever so slowly. In fact, upon closer scrutiny, it looked like a hand stretching out from behind the siding. Yes, a hand. Then it dropped down behind the shutter. 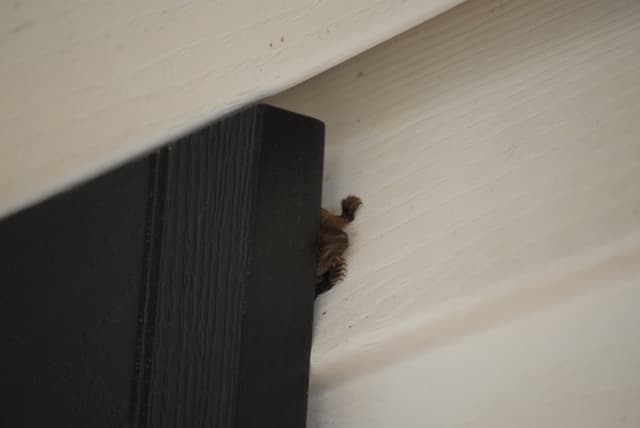 I stepped back a few steps and told my dad that it was probably some freak bug (because we have those around here) and to let it be. Well damn that father’s intuition because my dad asked if we had a lot of bats in the area. I explained that they’re active at night but surely this couldn’t be a bat… Well spoiler alert: it was a bat. A small brown bat about the size of my fist with it’s wings tucked in. Triple that size with the wings spread out. I swear it had been there for months, thinking all along that it was a leaf. I’m seriously an idiot. Well, Dad said it could be rabid since it was alone and didn’t seem to have left its spot behind the siding. Either way, it had to go. It was a bit unnerving to have it lurking so close to an entry point. My father went into the garage to survey the tools available for his use. My mother and I huddled together at the base of the porch steps just studying this little creature, moving its body ever so slowly. My dad came out with a long, thin dowel and started poking at the small hand and spindly fingers lurking just over the edge of vinyl siding. The hand stretched out more. At this point, my mom and I did the only rational thing we could think of. We screamed and ran into her car, parked about thirty feet away. After a few more pokes and my father’s body recoiling back a few times, Dad came over to the car window and knocked. I opened the car door ever so slightly. “Yes?” - “Where is Matt’s BB gun?” - “What?!” - “Matt’s BB gun. Where is it?” Well as you can imagine, this made me a bit nervous. I knew Matt was in the middle of his conference so I sent a text. “I need your BB gun.” - “What the hell do you need my BB gun for? Where are you? What are you up to!? What is going on over there?!” - “My parents are here. We need it for insurance reasons… I think we have a bat near the front door.” - “Oh for Pete’s sake. Keep me posted and don’t let your father put holes in the house!” - “Yeah, ok thanks. Bye.” Well the BB gun was in a hiding spot of Matt’s but being weeks before Christmas, it was accompanied by a Christmas gift for yours truly. Matt told me this at the last minute so I sent my father in to retrieve the gun. My mother and I remained in the car, making sure everything went smoothly from our spot. Gun in hand, my Dad tried to poke the bat out of the spot one more time.

My mother and I screamed as if on cue. It started wriggling with a bit more energy than five minutes earlier but it still seemed off. Up went the gun and after putting two holes in the siding, Dad put a small BB in the little guy and he stopped moving. I tentatively exited the car, leaving Mom behind to check on the progress from a better vantage point. The scene of the crime. Dad was already removing the shutter and once off the house, he tossed the shutter onto the grass.

He and I slowly walked towards the shutter. Attached by his little feet was the bat. Blood dripping down his chest. Teeth exposed and fangs out. FANGS OUT. It was tiny but seriously scary looking. 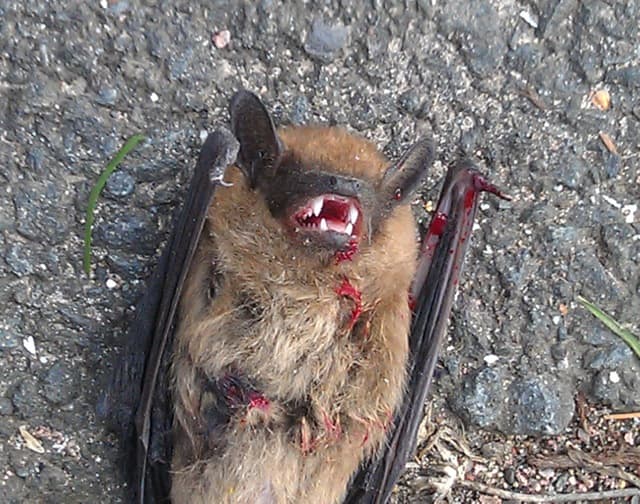 Dad suggested tossing it into the brook that runs along our property as a sort of burial, so we scooped him up with a shovel and walked down to “the waterfront.”

I said a few words. They were along the lines that while I don’t propone the slaying of innocent animals, I’m also not comfortable with animals with fangs residing that close to my home. Sorry ‘bout it and RIP. 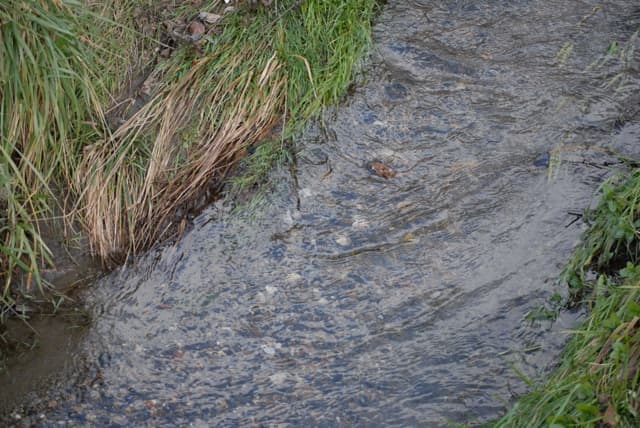 4. My brother-in-law lived with us for a few months when we bought this house. Every time we tell people that it was an old school house and show them the creepy picture, everyone always says, “Oooh, think it’s haunted?” I always reply, “No.” It’s an ex-school house. Not an ex-school house built over a cemetery or an ex-school house that performed exorcisms. Yet on one of our very first nights in the house, Mike swore over and over again than someone was tickling his feet in the middle of the night and he heard strange noises coming from the basement. AWESOME.

5. Our next door neighbor rents his home so we get new neighbors each year. The family that lived in in the house a few years ago was grilling out on their deck when they stopped by with some goods. “Care for some venison?” Matt and I aren’t giant venison fans so we politely declined. When we inquired later where they had gone hunting, they replied, “Hunting? Oh, no. We saw this deer on the side of the road and threw it in the back of the truck.” Ugh. Ick. Blech. We were offered roadkill. When our faces gave nothing away, they offered, “We have it hung up in the back woods if you change your minds!” Uhhhh, no thanks. 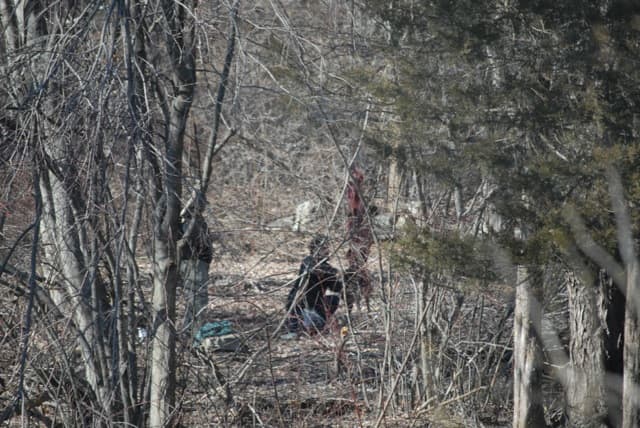 After they were done with it, they buried it in their backyard. The entire deer carcass. Steps from our property line. Months later, the woman that lived there called me and told me she thought she was being affected by a black magic witch in Litchfield. I won’t get into that story but needless to say, the family provided us enough spooky things while they were next door.

…aaaaaand that rounds out the top five “spookiest” things that have happened to us in this ol’ school house. If you have a spooky (or gross!) story of your own, I’d love to hear about it. Share it in the comments below, on School House Rehab’s Facebook page or shoot me an e-mail. I’ll share the best one on the Facebook page on Halloween night!