It’s been over three months since the Sandy Hook Elementary School tragedy in Newtown, CT. Back in January, I signed up for a 5K to honor the families affected that day. Good friends of ours are close with the Engel family, who lost their daughter Olivia Rose in the shooting. Our friends were running in memory of that little girl and all of the people affected, and I was proud and honored to join the “Running for Olivia Rose” team and join the larger support effort.

My sister-in-law Erin flew in from Denver to lend her support, and a couple of weeks ago, Matt decided to run as well! We hit the road early on Saturday and hit traffic in Hartford just as we were getting off the downtown exit. The Capitol reminded me of Downton Abbey. Shhh, don’t tell me, I’m just starting Season 3… 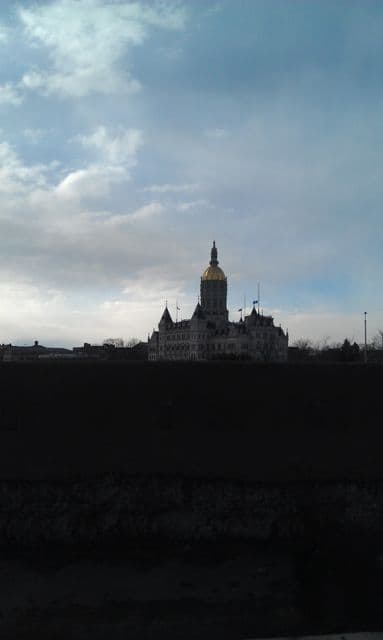 Once we were in the parking garage, we walked to the team meeting area and met up with our fellow team members. I ran into a friend from high school who was connected to the Engel family. Nice to see you, Erin! 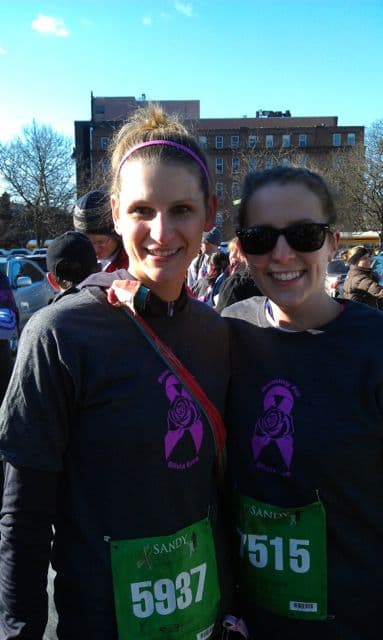 There were a bunch of snacks laid out, but people were mostly chatting and waiting for the race to begin with bated breath seeing as it was flurrying. 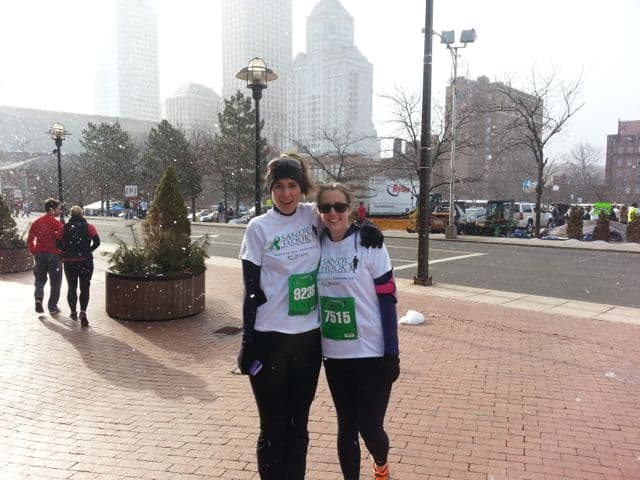 It was so windy, too, making it feel so much colder, so we were literally hopping around the parking lot trying to stay warm and counting down the minutes until we could run to warm up! Here’s a great shot of the entire “Running for Olivia Rose” team! 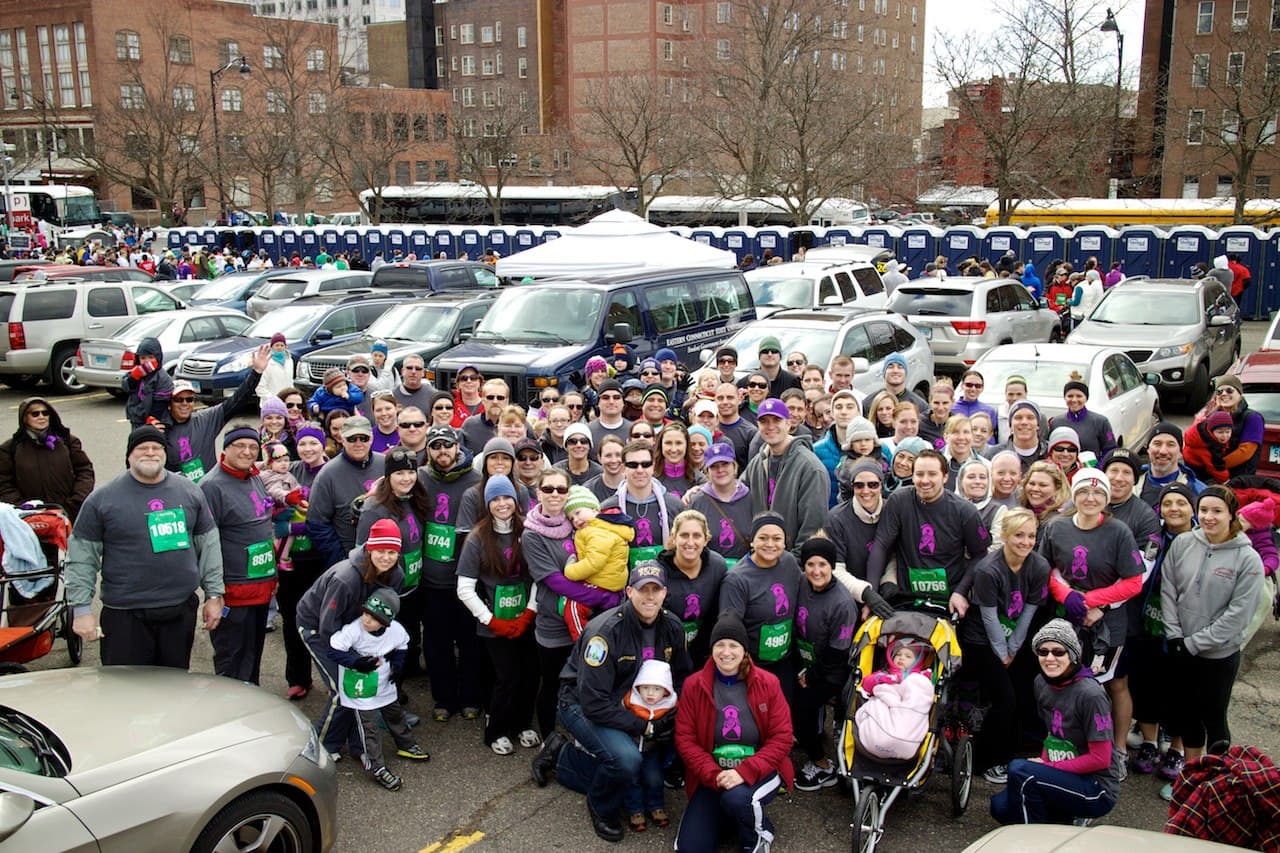 You can kind of see Matt in the back middle (with his ubiquitous green hat) and I’m peeking up over his shoulder on my toes. I almost missed the group shot waiting for the restrooms - ooops!

Once it was time to head over to the start, we could really appreciate the mass of people. The run was originally supposed to take place in Danbury, CT, but due to the overwhelming response, it had to be moved to Hartford for capacity purposes. Pretty amazing. There was a maximum allotment of 15,000 runners and that number was reached easily. There is an estimate out there floating around that says there were close to 60,000 people in the city for the run, between the runners and all of the spectators and supporters. Impressive. 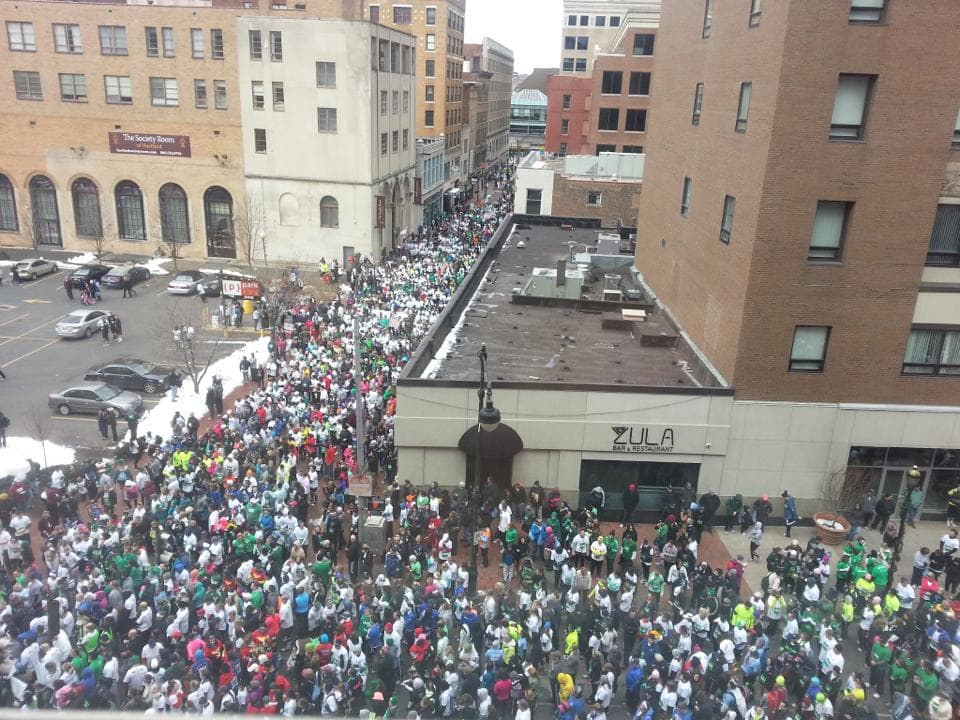 The above is an aerial-esque shot that I found on Facebook. I had chills throughout the event more times than I can count, but one of the biggest moments for me was turning the corner after the start and seeing the sheer mass of people that showed up to run in support of the SHES families. 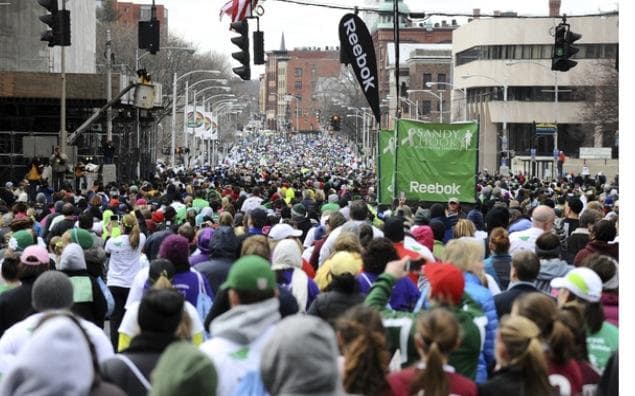 We all wore matching t-shirts for the team, and this was the graphic: Olivia Rose with Officer Chapman, a first responder and a friend of the Engel family who carried Olivia out of the school. More chills. 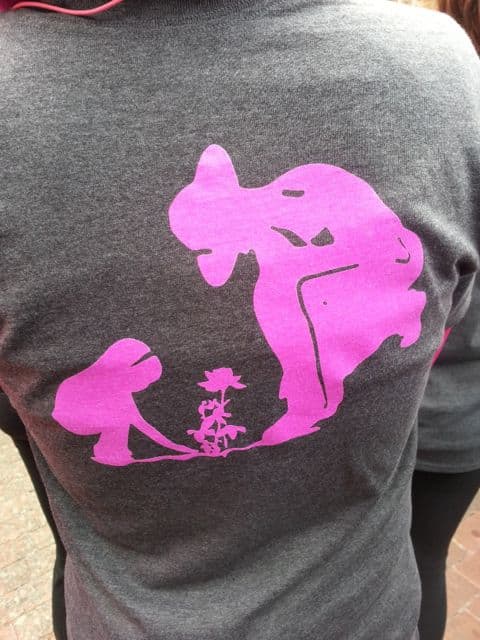 However, the overall mood of the event was love, happiness and hope, which made for a meaningful and uplifting day. I was so happy Erin flew in for the run - headband and all :) 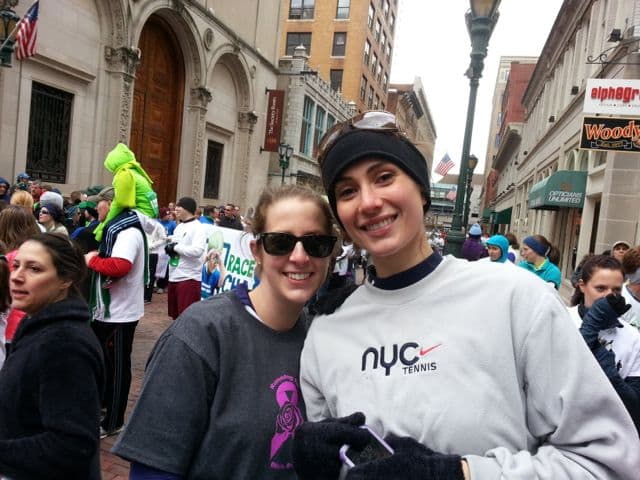 Before the race, we listened intently to the speeches given by a number of people, including the minister from Newtown Congregational Church and Governor Malloy. The minister mentioned that each time we put one foot in front of the other during the run, we could imagine doing the same towards healing. He said it much more eloquently than that, but it really stuck with me.

Right before we started, we noticed these guys in a nearby window waving and smiling to all that walked by. They were so sweet. Until they passed me on mile 2. Damn kids. 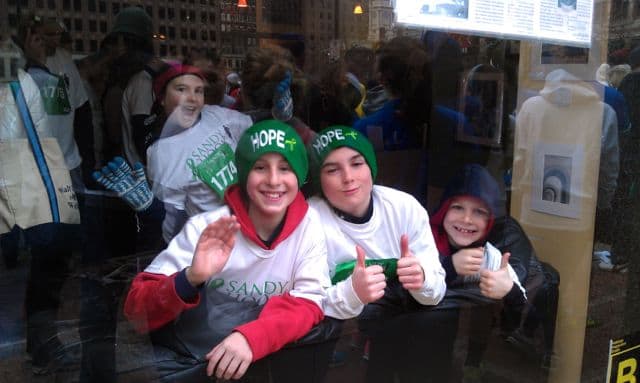 We met up with our new friend Wendy after the run, and we got this good shot with Downton Abbey the capitol in the background. 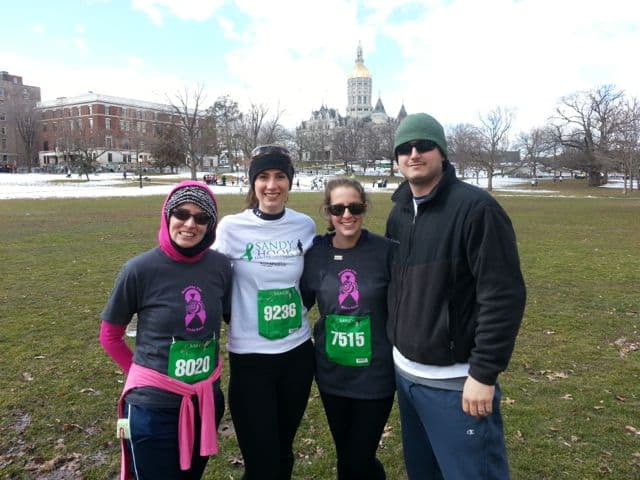 We were so hungry and tired after the events of the day that we searched the streets for food. We found our way into The Russian Lady, which was one of the only restaurants without an hour wait. The food was okay, but the drinks were great. Can’t really mess up beer, I suppose. Here’s a self shot (can’t bring myself to say “selfie”) of me and my friend Alli. 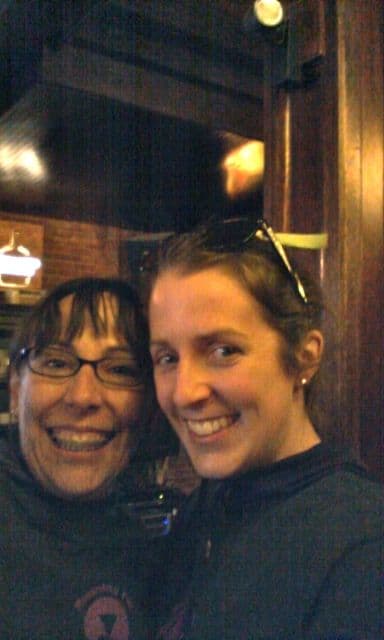 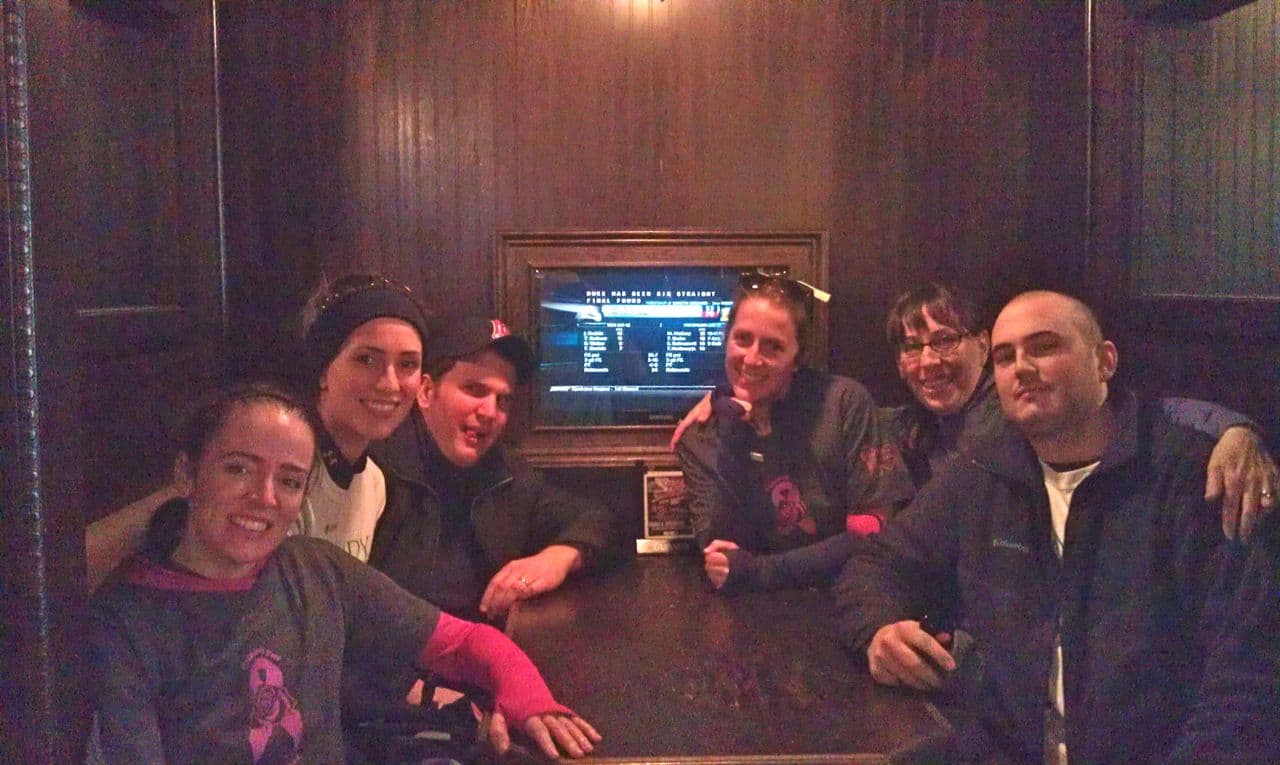 It was great to be able to sit and relax after the run, talking with friends and decompressing from an emotional day. Thanks to all of you who supported the run - it ended up being the largest inaugural road race in state history, and I know the families of SHES are grateful for the outpouring of love and support. God bless Newtown.

← A New Pantry For $30
A Scattering And A Smattering →