Hoping you all had a great Memorial Day Weekend! Matt and I got a lot done. It was awesome. This post is mostly about our experience with removing our laminate counters last week, but here’s a sneak peak on what we had goin’ on this past weekend… 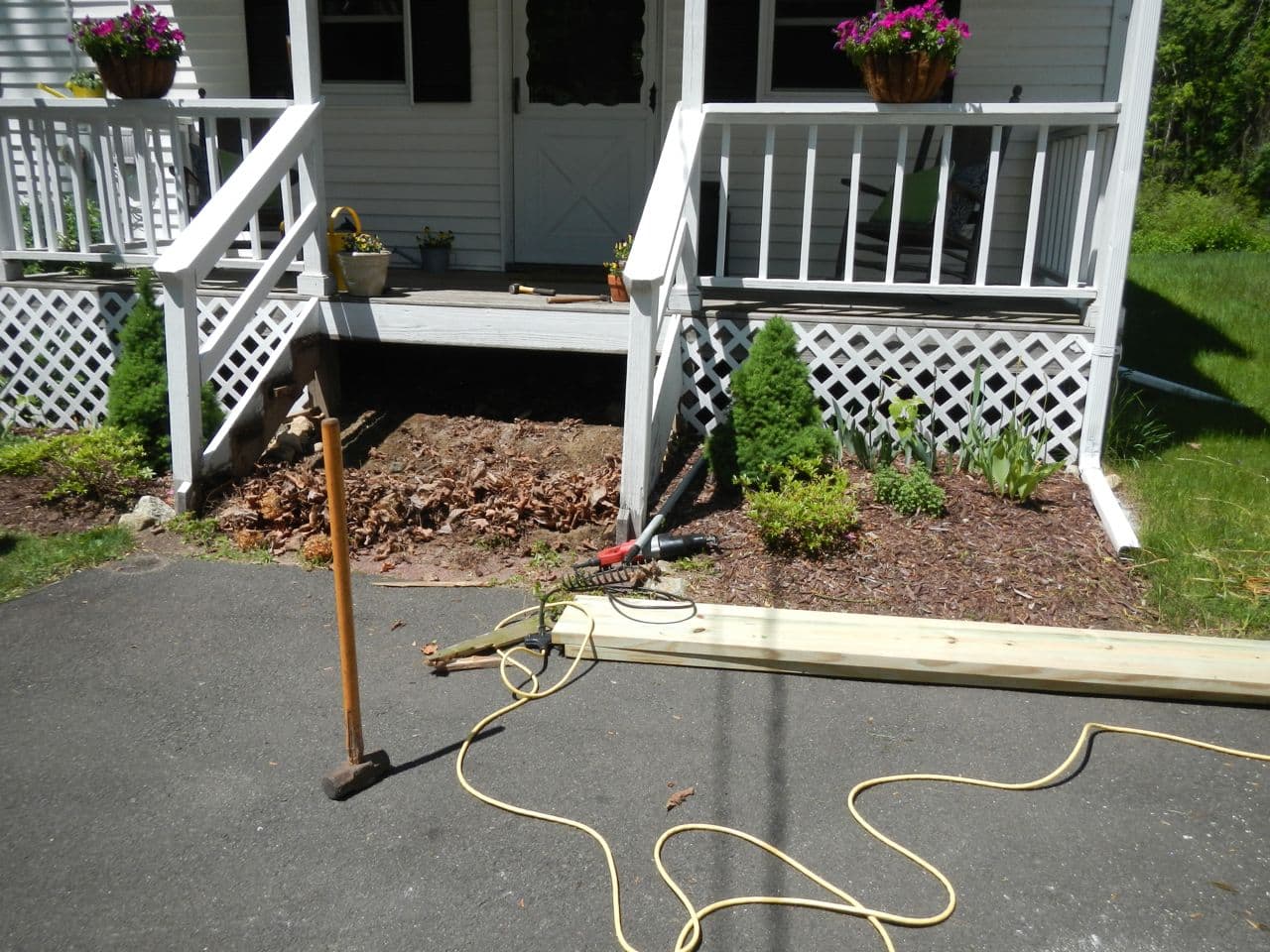 Yep. Naked front steps. Maybe more non-existent and less naked, yes, but you get the idea. More on that later this week and back to the counter removal, shall we? Here were the counters when we first bought the house… Sexy, I know. Try not to drool. 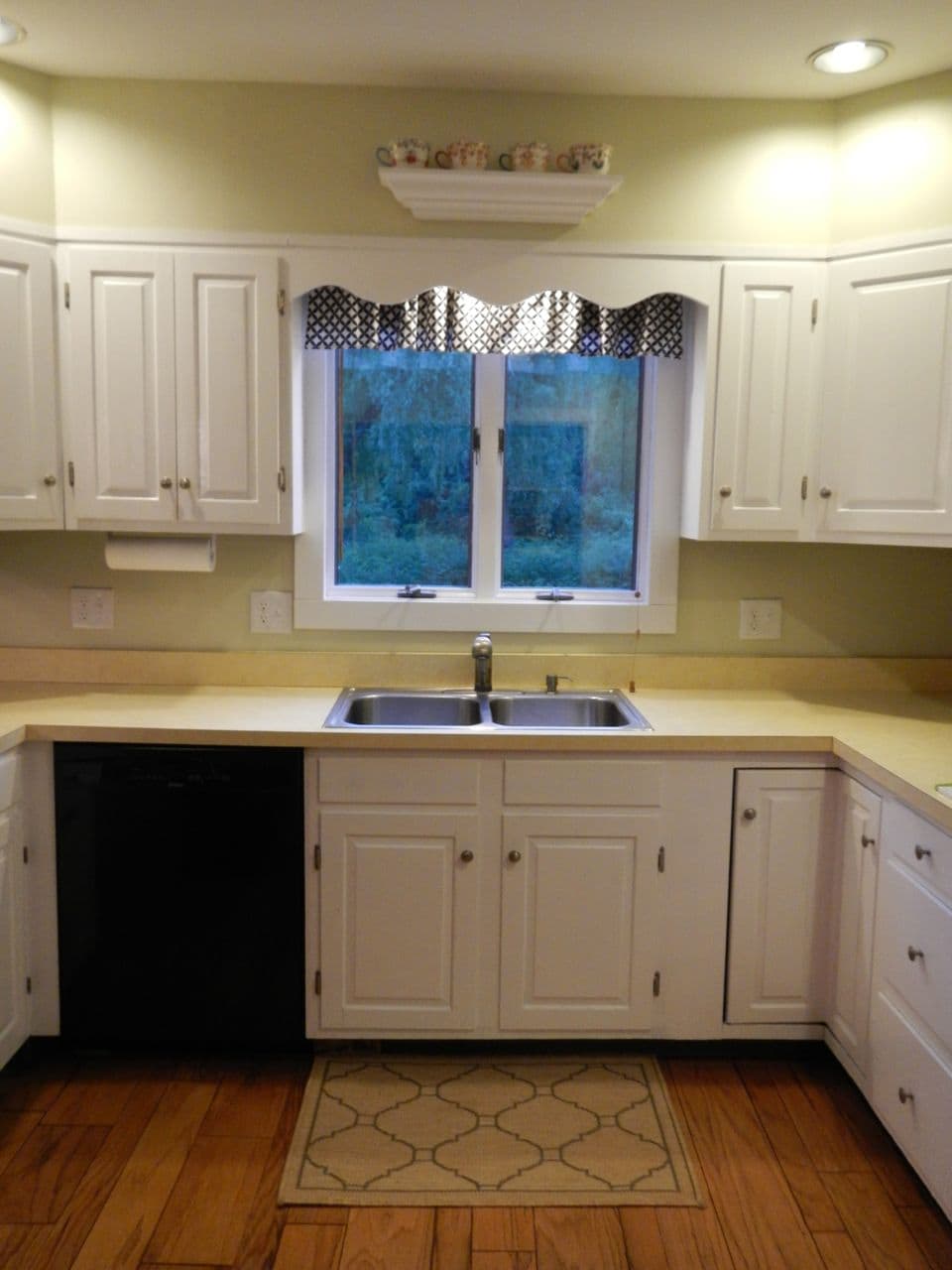 And as they stand now… Non-existent! Progress! 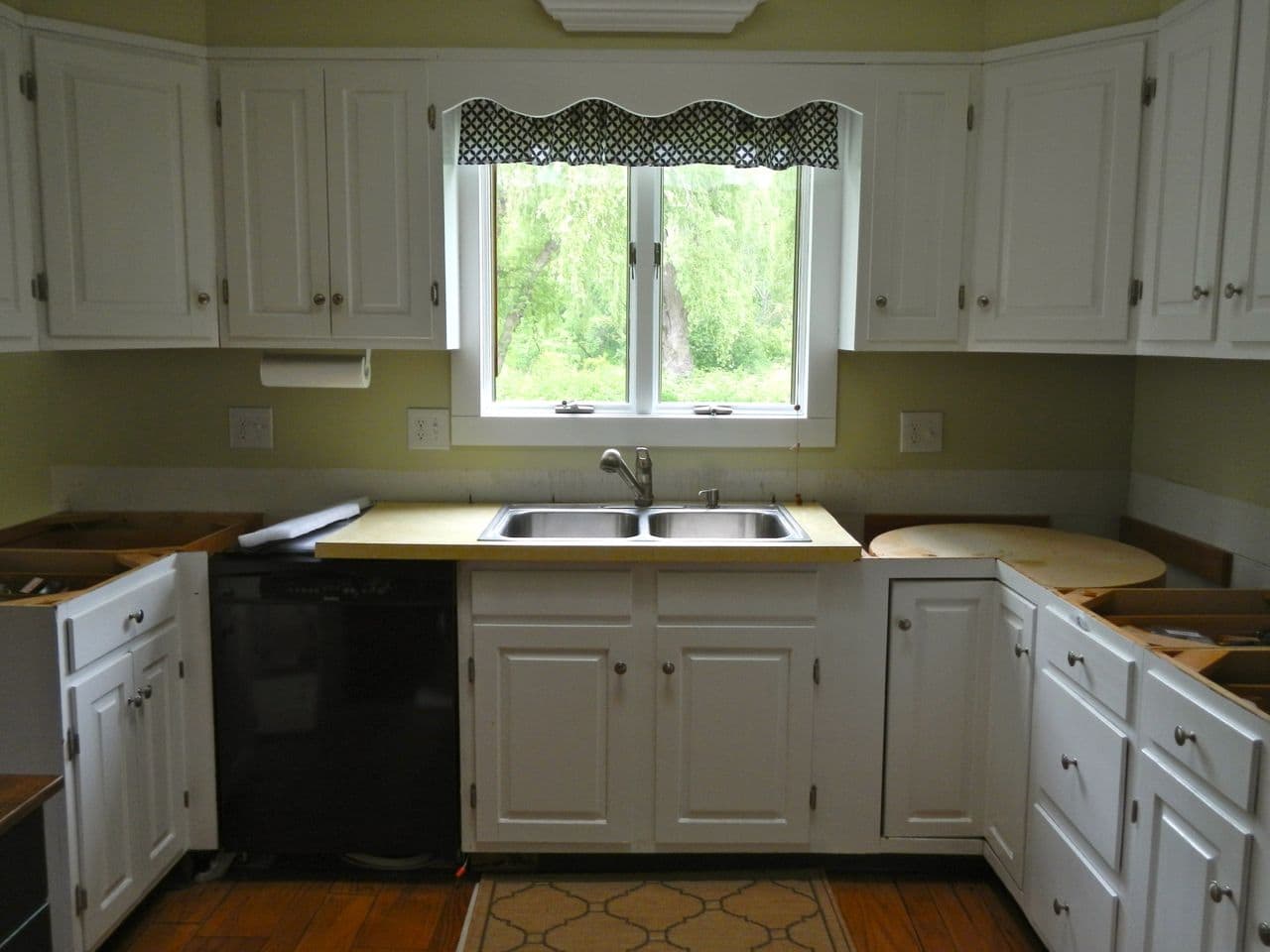 You might notice the sink is on the last slab of counter, which is unattached. I decided I wasn’t willing to part with it until absolutely necessary. I didn’t want to eat out every meal for three weeks while we wait for the new counters. That would be bad for the wallet and bad for the waistline.

We got those brown-veined, yellow suckers up and out, but not without tons of quotes from Matt. It definitely wasn’t as “quick-n-easy” as we thought. If we knew this, we wouldn’t have started at 9:30 at night when the guy was coming to measure the next morning.

It took two hours and it wasn’t fun for the most part, until we started getting deliriously frustrated and tired towards the end. That always makes for a great end of the night.

Matt started with the “backsplash” piece. If you can even call it that. The flat piece (we used a spackle knife) against the wall is key when you’re using a crowbar. Otherwise you’ll put a whole in your wall. No good. 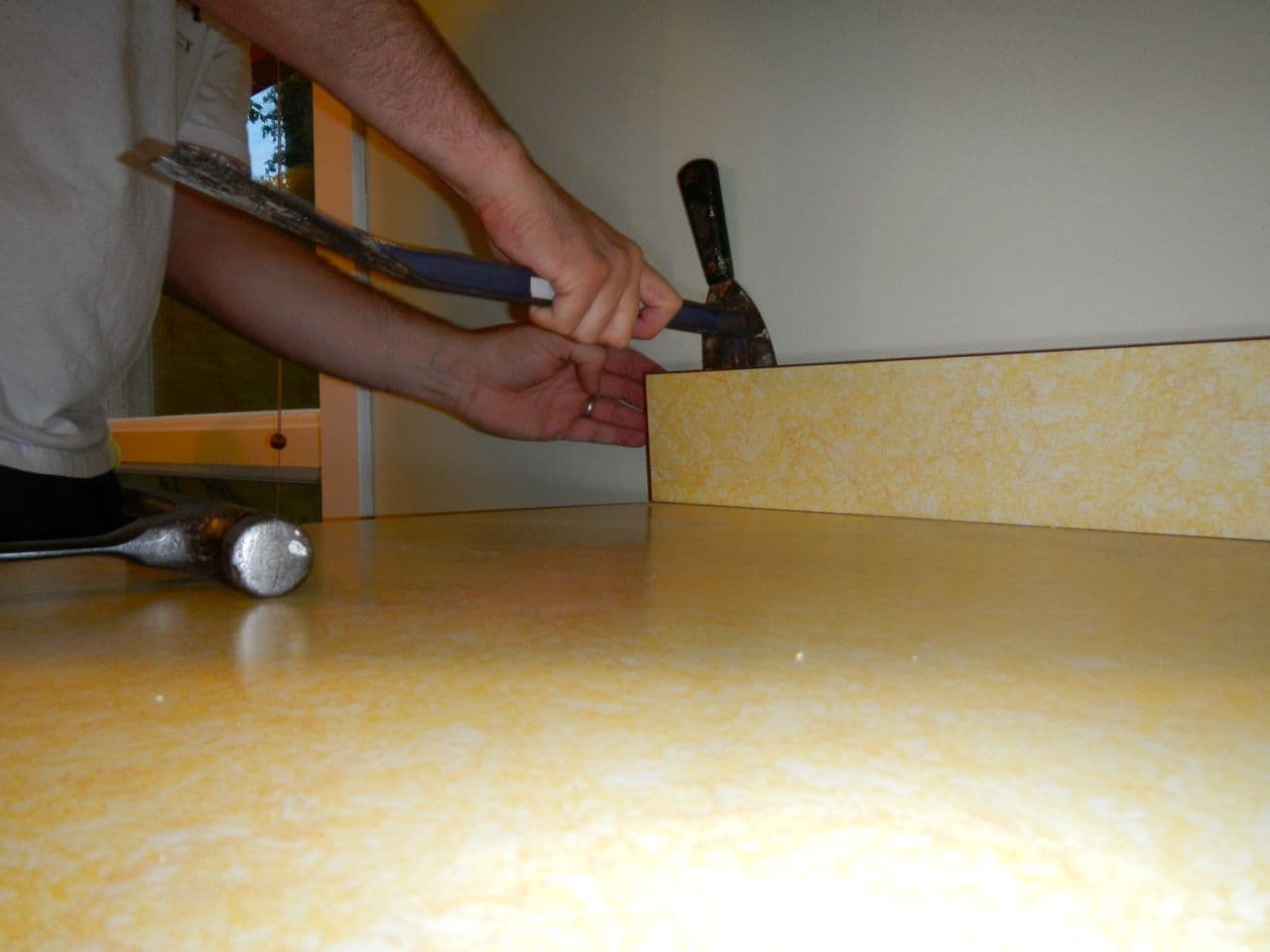 It came right up, thanks to some seriously rusted screws holding it together. Ick.

Then, we cut power to the dishwasher, disconnected the water line, and pulled that bad boy out while my boy went in.

We unscrewed the counters from underneath, and it was harder to locate the screws that you’d think. Some of them were stripped pretty badly, so Matt took out a small oscillating tool to cut the screws. He asked if I wanted to use the power tool, and I jumped at the chance. Until sparks starting flying. Literal sparks. What?! I freaked out and handed it back. Matt then tried to use the same oscillating tool to cut the counters so they’d be easier to dispose of. With the dishwasher out, there wasn’t a worry of hitting anything with the tool. 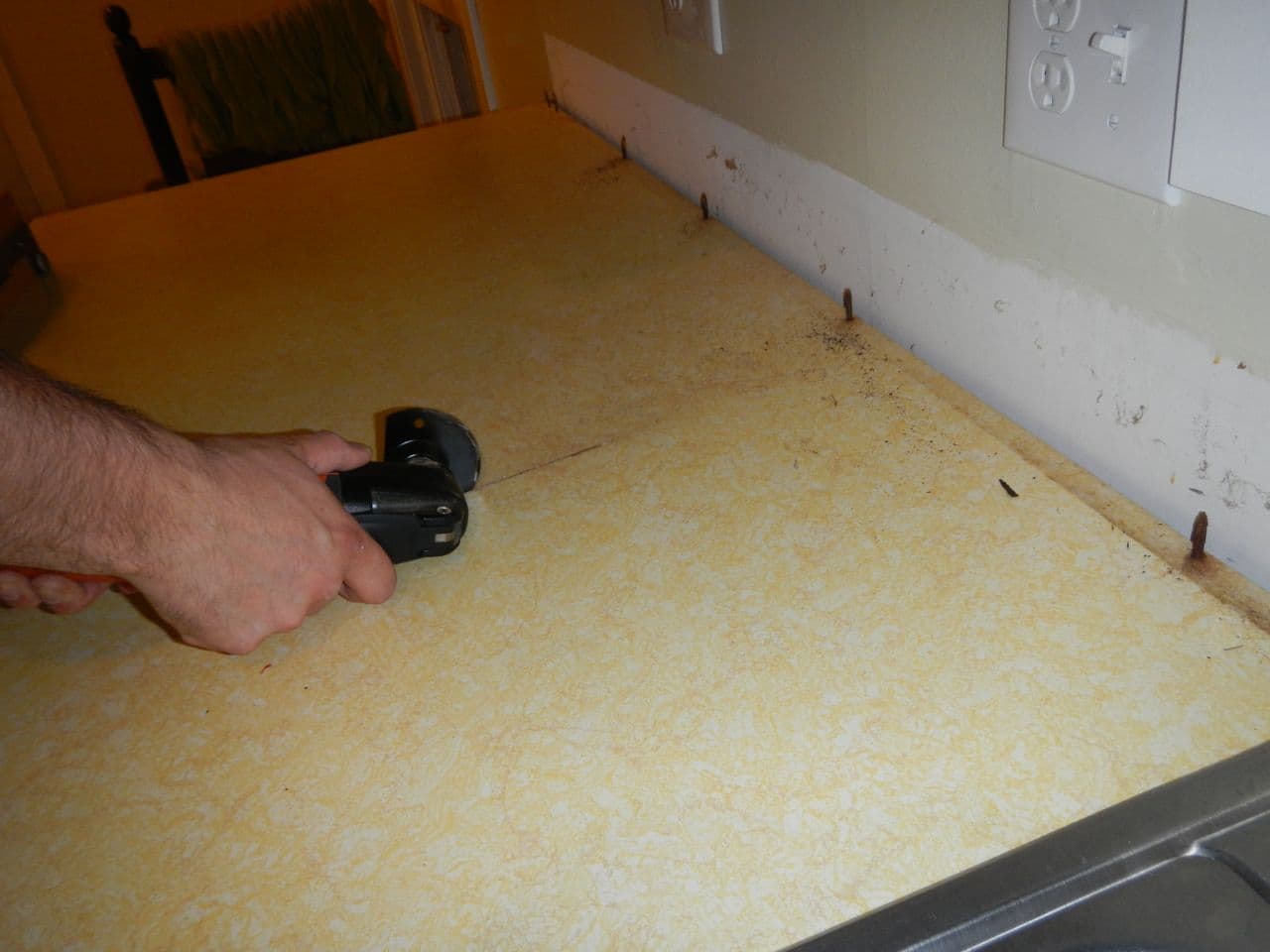 The small oscillating tool didn’t cut it, (ha!) so Matt brought out the big guns and went out to the garage for the Sawzall. Smirking all the way, naturally, as documented in his quote file. 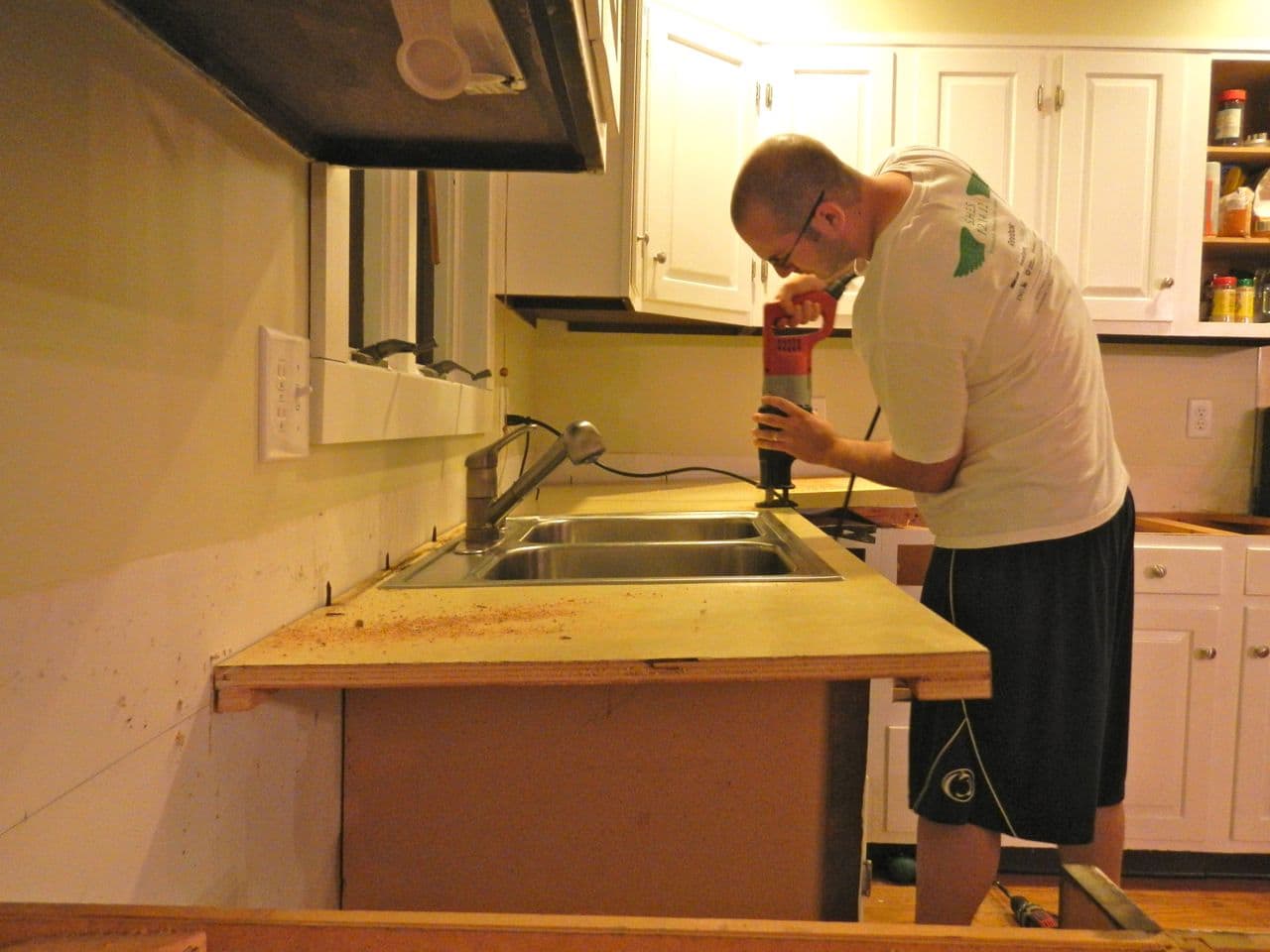 By the way, I know these pictures stink, but it was late at night and we had the power cut to two recessed lights that were on the same line as the dishwasher. A little over halfway through the process, the kitchen looked like this… 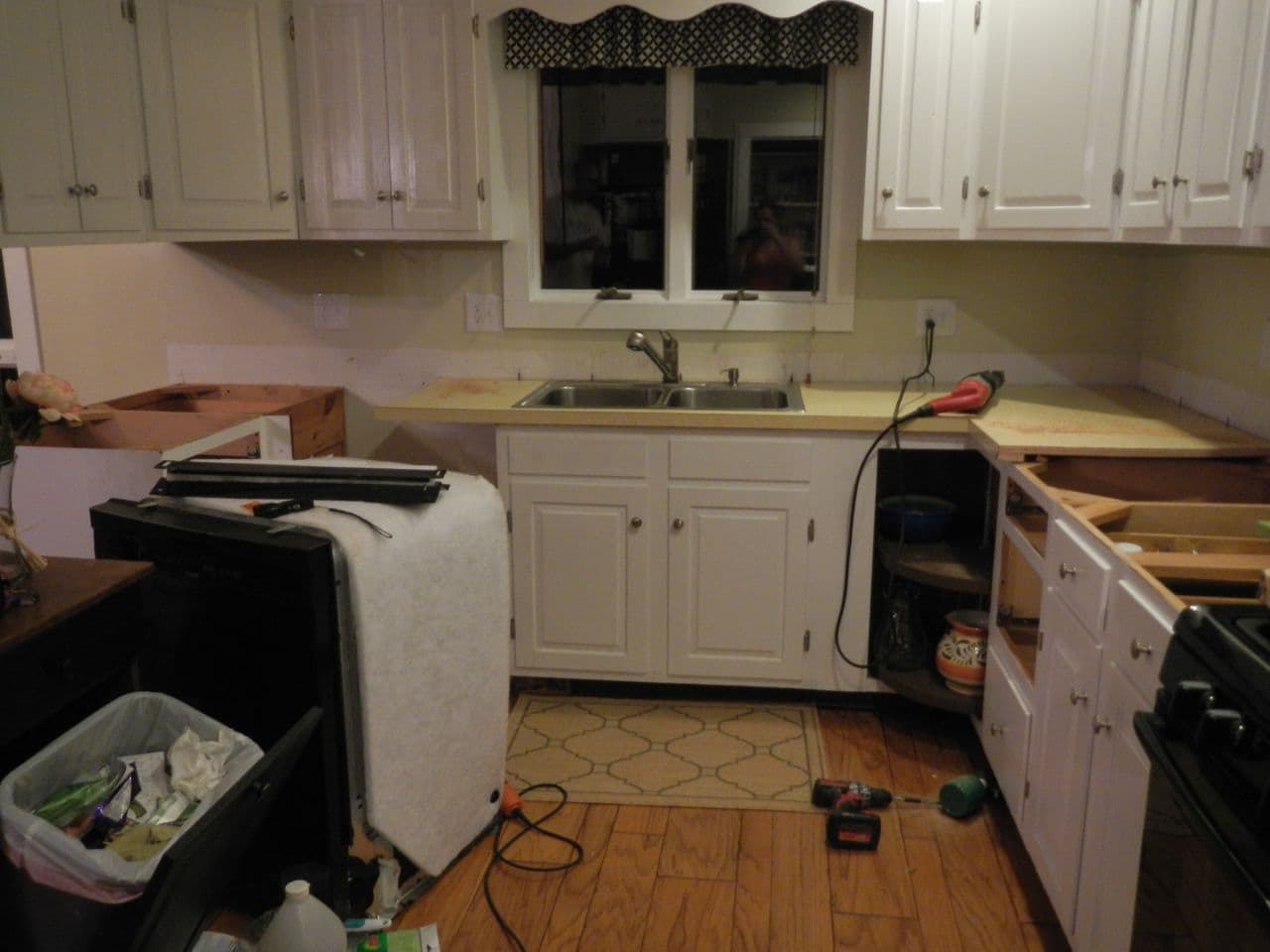 It was a bit chaotic, but it always gets worse before it gets better, right? Matt let me take out the last screws when his back started acting up. I will admit, I was mostly a cheerleader during the process up to this point. At least we got one shot of me doing something.

So there you go - our old counters are off and I’m waiting patiently (kind of) for our new ones! Can’t wait to show you how they look! Two weeks from now, we should be in business! Anyone else working with yellow counters? How was you Memorial Day?

← A Man Under Duress
Front Steppin' →