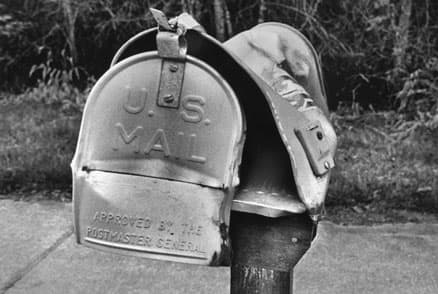 Apparently a few local kids (with rocks for brains, assuredly) like to go around town playing “Mailbox Baseball” where they hang out of cars and smash mailboxes with baseball bats. This is, of course, what I think is happening using common sense and testimony from other townsfolk. Do people still say “townsfolk?” I guess they still do. Anyway, I’ve Googled it and it’s a nationwide thing. Kids will be kids and bored kids will most likely be bad kids.

Our very own flock of bored kids came by Friday night and smashed our mailbox so hard that it completely detached from the post to which it was nailed. The red flag ripped off and all 35 nails that attached the mailbox post to the road’s guardrail were exposed and pointing straight up. How incredibly child friendly for my toddling 16-month old, am I right?!

A few other boxes were hit on our road. I have no idea when it happened but I do know that our front windows were open and our ferocious guard dog was too conked out to make his usual fuss. Matt thinks it was just one quick blow to the ‘box which is quite a ways from the house so Griff wouldn’t have been that bothered by it. Step a foot on the porch, though, and he acts like he wants to eat you alive.

The morning after, I was rightfully disappointed and more than a little mad. We’d need to spend time out of our precious weekend together to buy a new mailbox and get it up so that we would continue to get our mail come Monday morning. Read: Not how I wanted to spend my weekend. Matt was characteristically quiet as he thought about options, motivations and ways to calm me down.

In the end, we decided to keep the old mailbox, try to bang out the dents and reattach the flag. Matt even used the same 35 nails to smack it back into place next to the wooden guard. Good as new? Not quite. It’s definitely a bit “rough” looking and neighbors…I apologize. You see, if these dipsticks decide to come around again and destroy my would-be cheap-o $30 replacement mailbox, I’d be just as livid. Yep, even over thirty bucks.

So until then, we’ll see if it happens again and maybe use a borrowed motion-activated camera tied to a tree to get a plate number. Maybe. Depending on how crazy I’m feeling. Halfwits will be halfwits but halfwits that get caught may be deterred in the future, right? I know it’s just a mailbox and that it’s just kids being (bored!) kids but come on. Destroy your own property if you’re looking for a thrill.

Anybody else have vandals strike them at (or near) home? How did you react and respond?