Despite our better judgement, Matt and I enrolled in Bike New York again this year. Yes, we are 3 years older than we were the last time we biked 50 miles around the NYC burroughs. No, we didn’t train. Thanks for pointing those things out. We even bested ourselves, and signed up with Matt’s sister and brother who are both in OH SO MUCH better shape than us. We dropped Griffin off at Matt’s mother’s and made the train with a few minutes to spare. Once we were rolling, everyone was chipper, alert, and excited. Nick had been looking forward to BNY for a while, (as we all were) and even showed us a smile. This kid at 14… not much of a smiler. 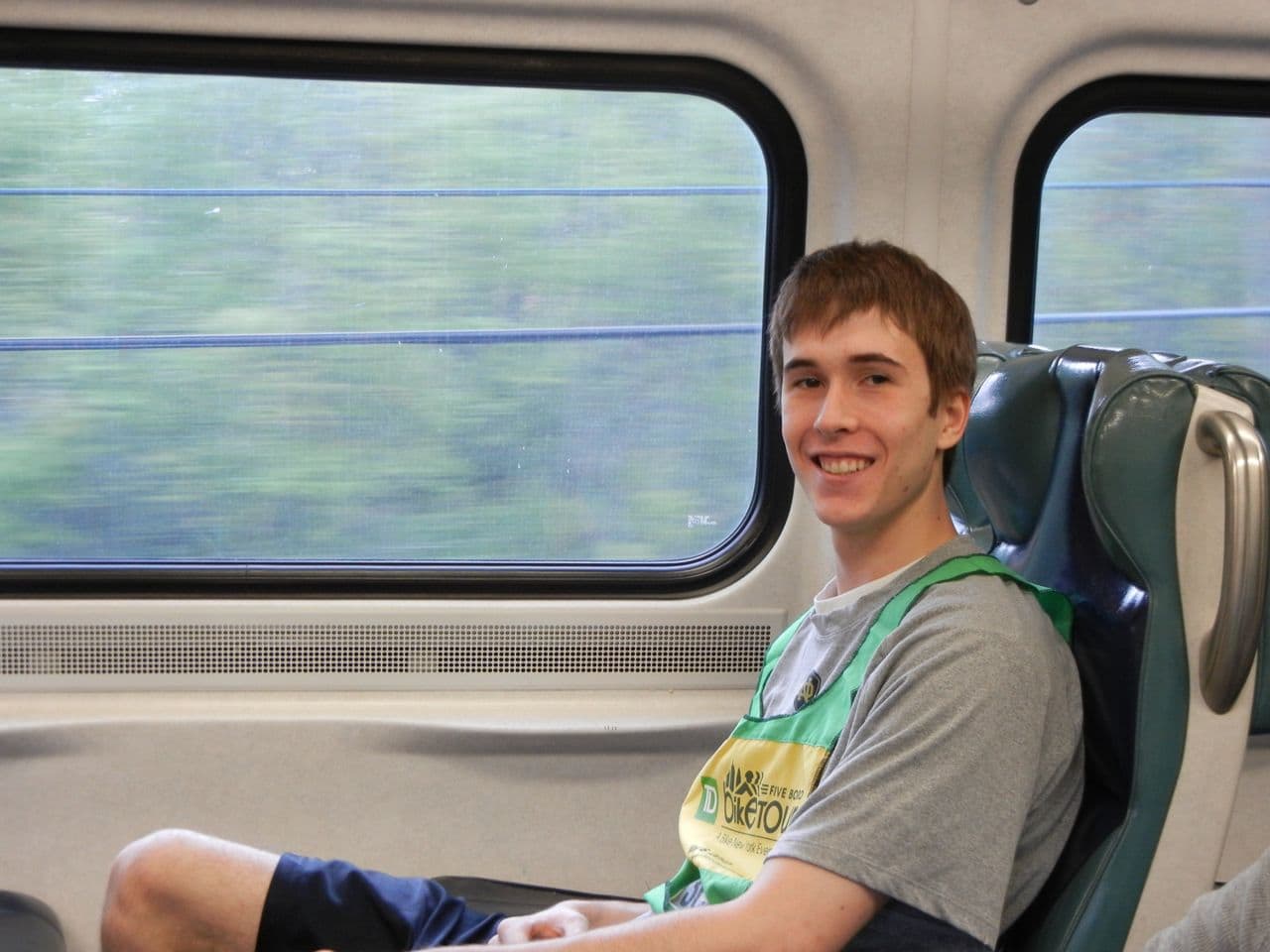 Matt’s sister Erin joined us as well, the fittest of the group by far, and was so looking forward to this tour of NY as a workout. I told her not to wait up for me. Run me over if she had to. 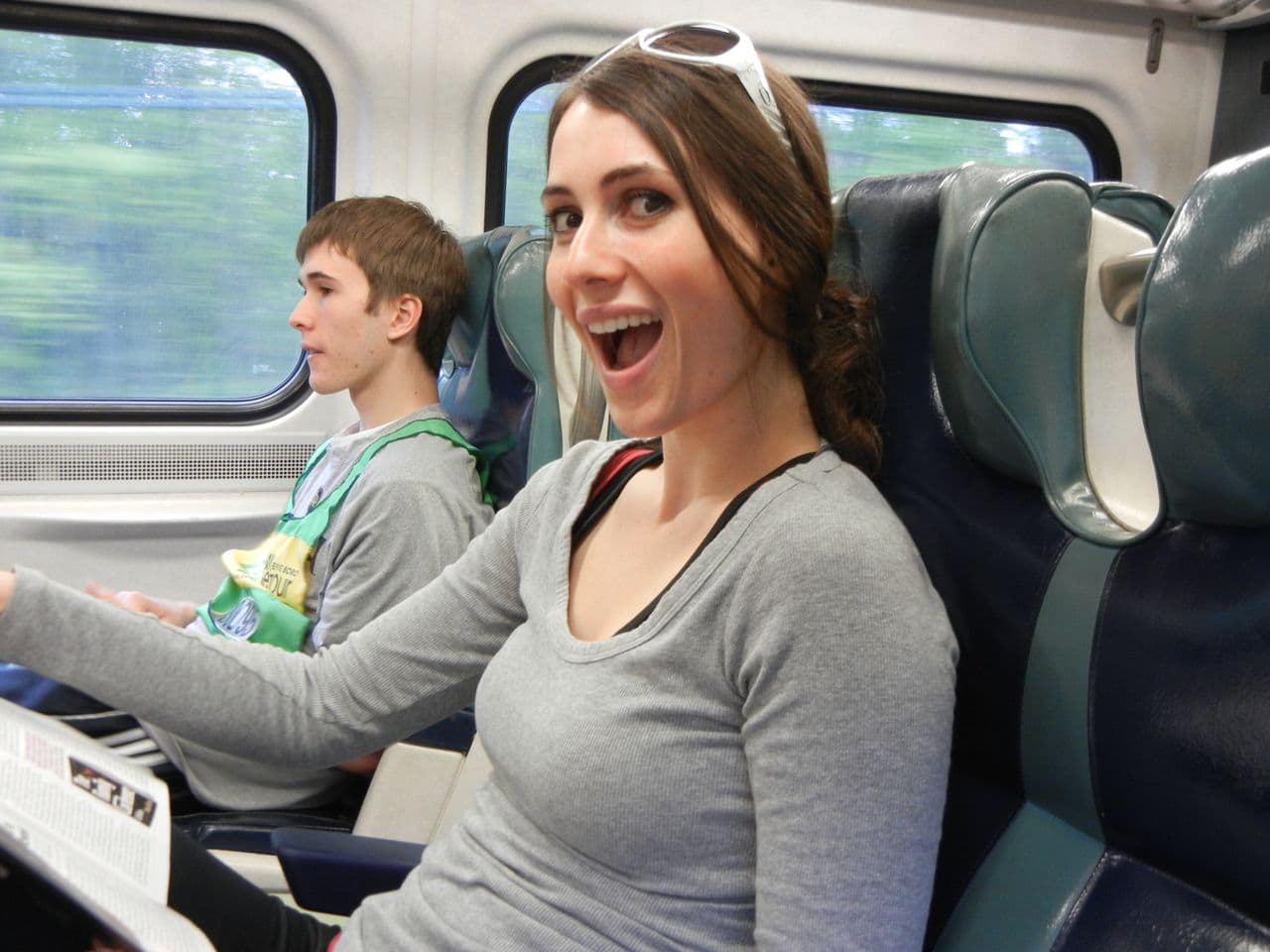 And of course, my partner in crime, my fellow biking slacker logging in with a combined 10 miles of training over the last 12 months… Matthew. Not a smiler in general but we take what we can get with him. 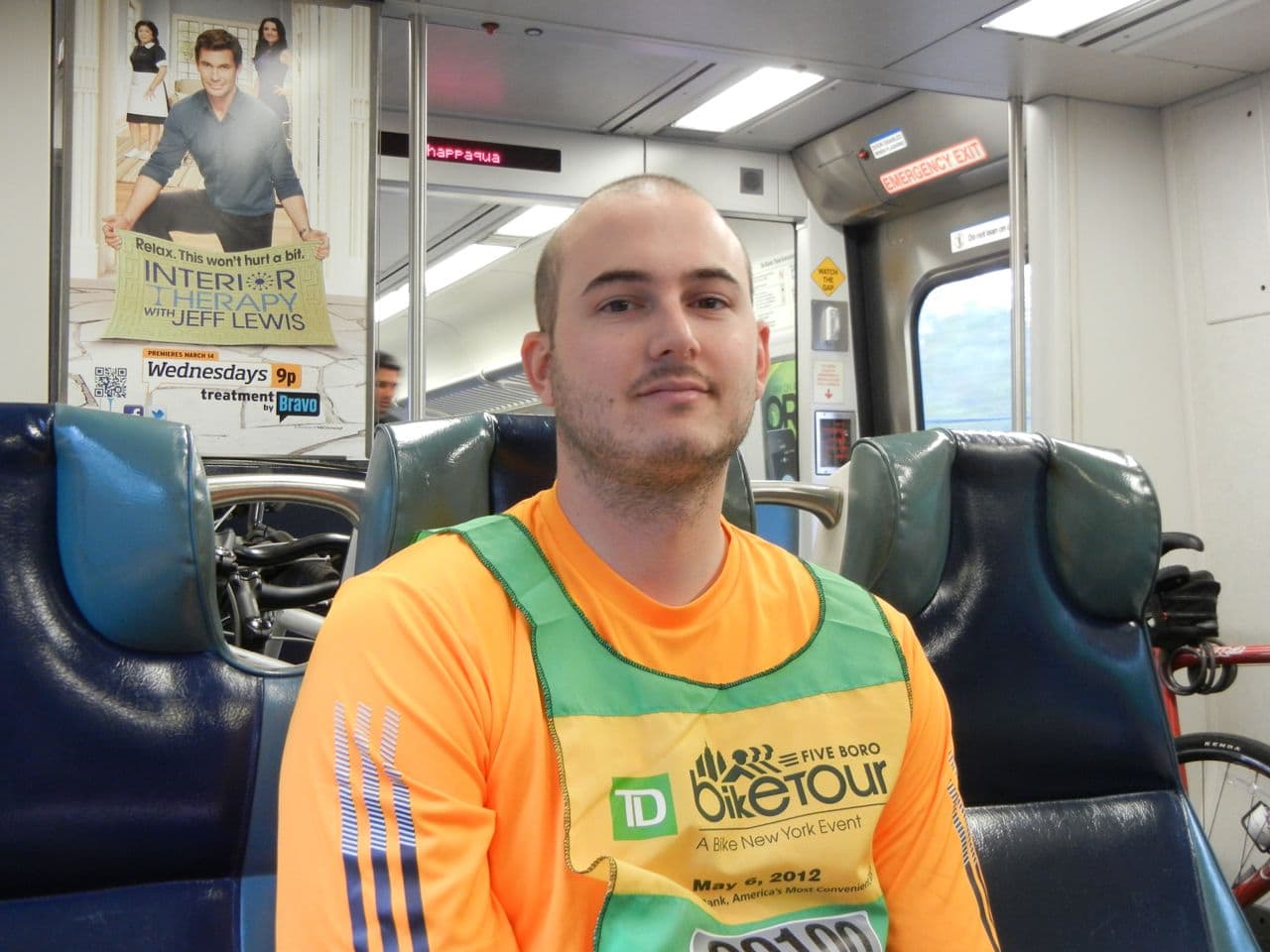 We took the train from Southeast, NY, which is the closet Metro-North station to our house. As a person who grew up in a house that was a 3-minute car ride to the 50-minute train ride into the city, this commute BLOWS. It takes us a solid half hour to get to the train (not including time to drop off Griff at my mother-in-law’s) and then it can be a 90-minute train ride into Grand Central Terminal. Shoot me. In fact, that train ride sucks so much that Matt and I made a pact that states: EVERY time we go into the city, if we can’t get on a train by 10pm, we will stay in a 5 star hotel anywhere we can so that we can avoid the hell train back at all costs. But enough about the hell train and back to our day.

We were all set to arrive at GCT with enough time to ride the 4.6mi downtown to Battery Park and start at 9:15am. UNTIL. Signal problems arose for ALL TRAINS going in and out of the terminal and we were stopped in Fordham indefinitely. We waited for a few minutes on the train to see if the issues were sorted out, and kept an eye on what the other bikers on the train were doing. For the most part, everyone was waiting it out and figured that we’d just be a few minutes late to start the tour. Well, a few minutes later, the annoucer/conductor man came on the radio and said it might be five hours until the signal problems were fixed and the train would be on the move again. That wasn’t going to fly. We grabbed our helmets and bikes and desperately tried to follow the seemingly more experienced riders so that we wouldn’t be stranded in the Bronx by ourselves. We ended up hooking up with a couple from our neck of the woods and followed them a few miles (on bike) to catch a local 4 train into Grand Central, so we could get on our merry, bike-alicious way. So there we were, waiting at yet another train stop, hoping it was the right train in. But alas! Still pretty excited! 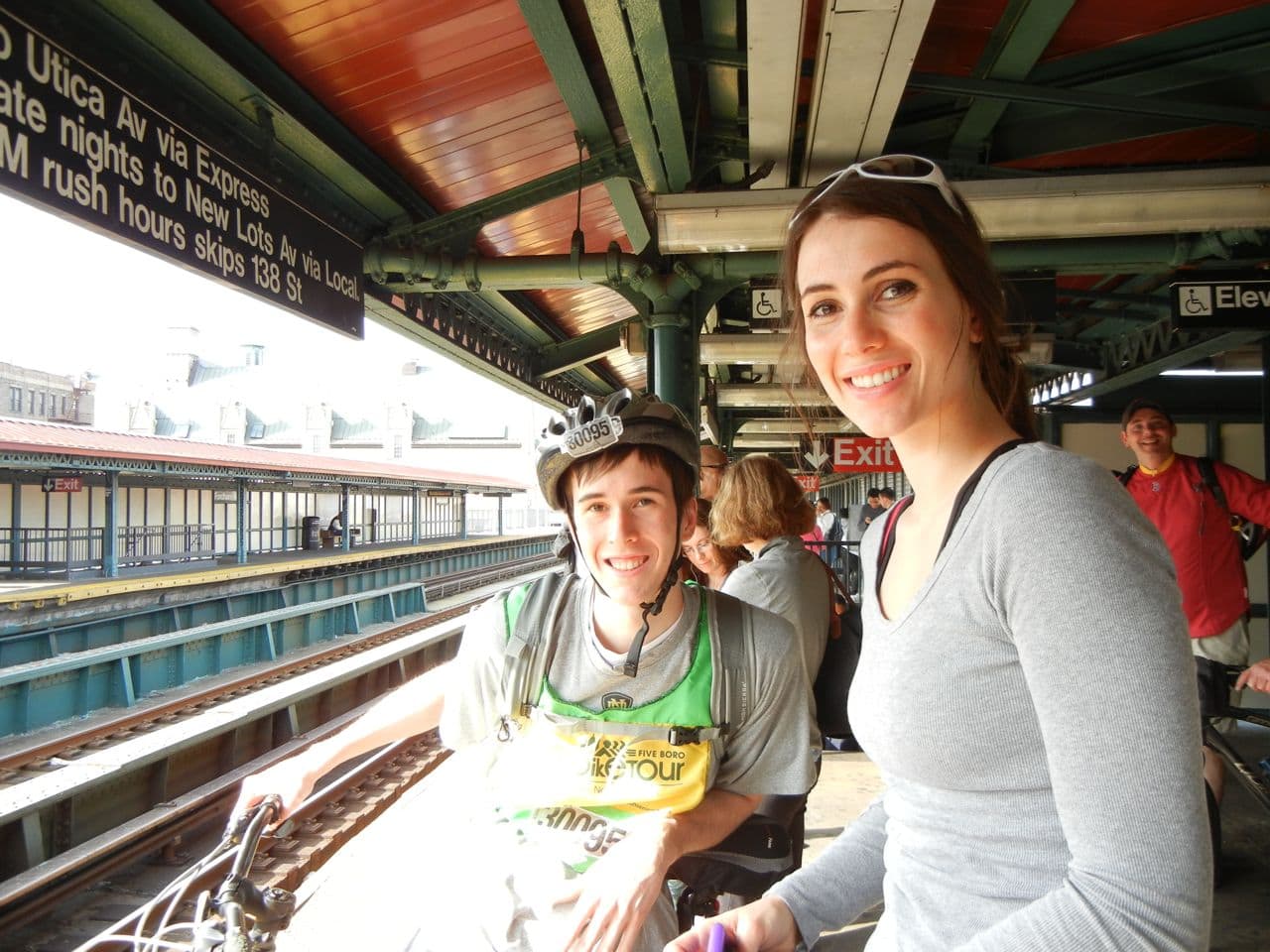 We made it down to GCT quite late, and boy did I meet some characters on that local Sunday morning Subway ride. Another story for another time. We opted to start the tour from midtown, because we didn’t want to lose 10mi riding down to Battery Park and back up 6th Ave when we were already running very late. We sprinted (observing some NYC traffic rules along the way) over to 6th Ave and joined the throngs of bikers coming uptown (to the jeers of spectators yelling “cheaters!” I can’t say what I yelled back at them in this public forum. I was stressed and not so welcoming of crap comments from nasty teenagers). We were soon on our way up towards Central Park and most of my stress from the morning had melted away. Photo op time! Note: we didn’t just stop for random photos all of the time. Matt was adjusting his bike seat for this riding pause. 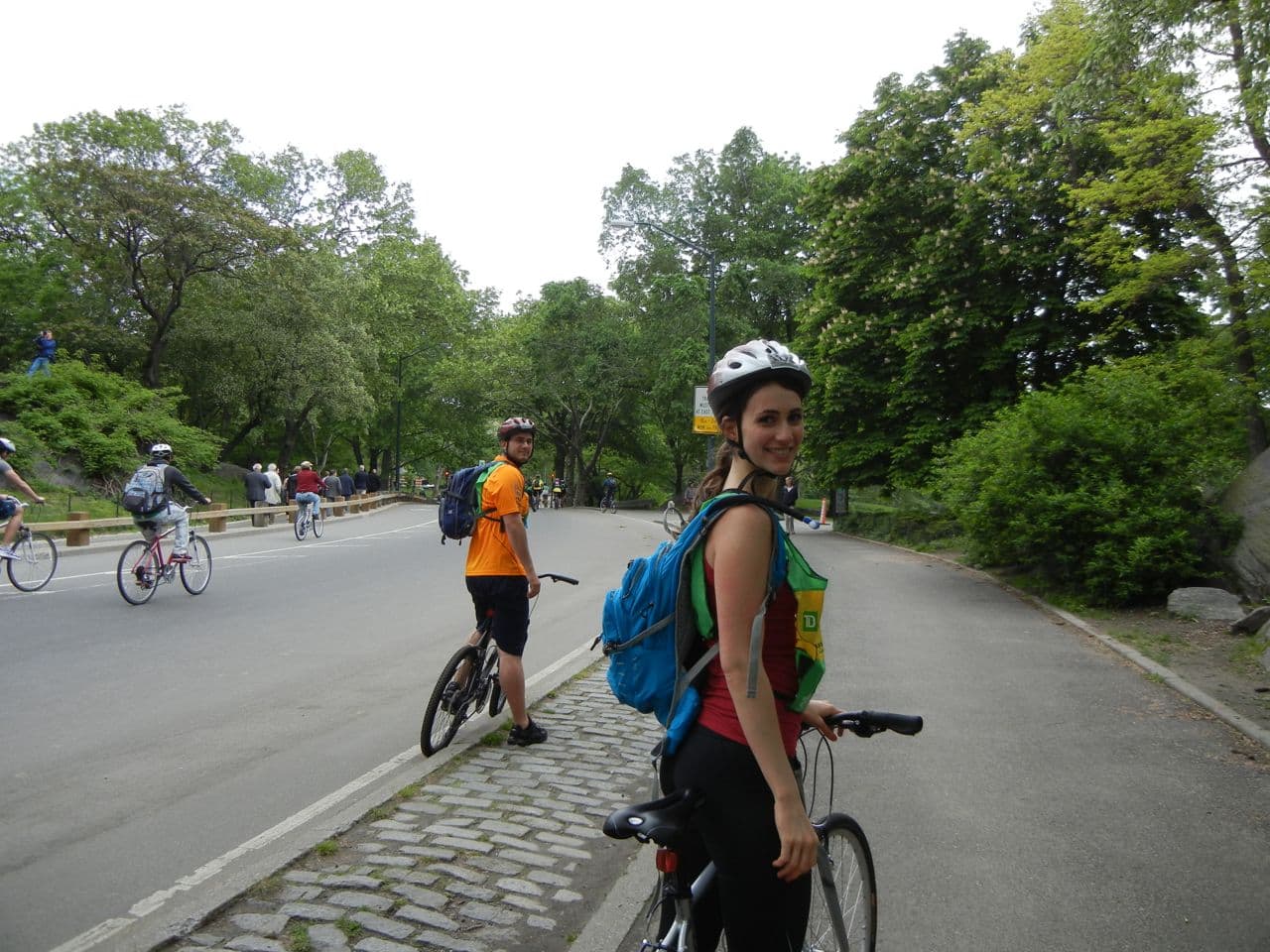 We were having a great time, settling into our groove, (groove = me & Matt chasing down Nick & Erin) when we came to an abrupt stop a mile or so from the Madison Avenue Bridge headng into the Bronx. We never found out what the hold-up was, (we were walking our bikes FOR. EVER.) but soon enough, (but totally not soon enough at the time) we were on our way again. Here’s a shot of the unhappy campers bikers. 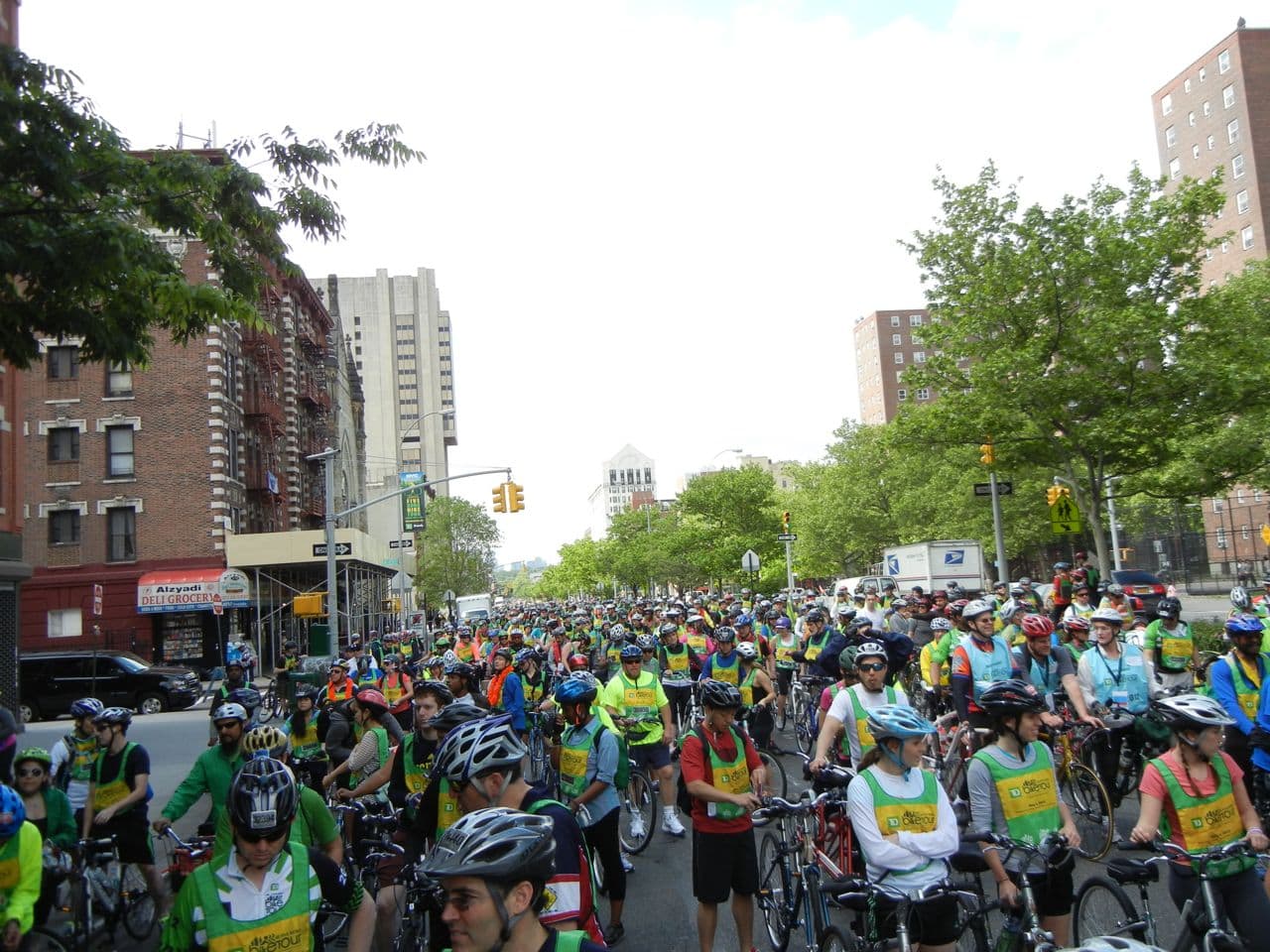 After a solid chunk of awesome biking, we arrived at the money shot in Queens, near the Queensboro Bridge. We pulled off to the side (only causing 2 or 3 collisions) and snapped some quick pics. No, literally, we had to take them in seconds and get out of the way so we weren’t run over. 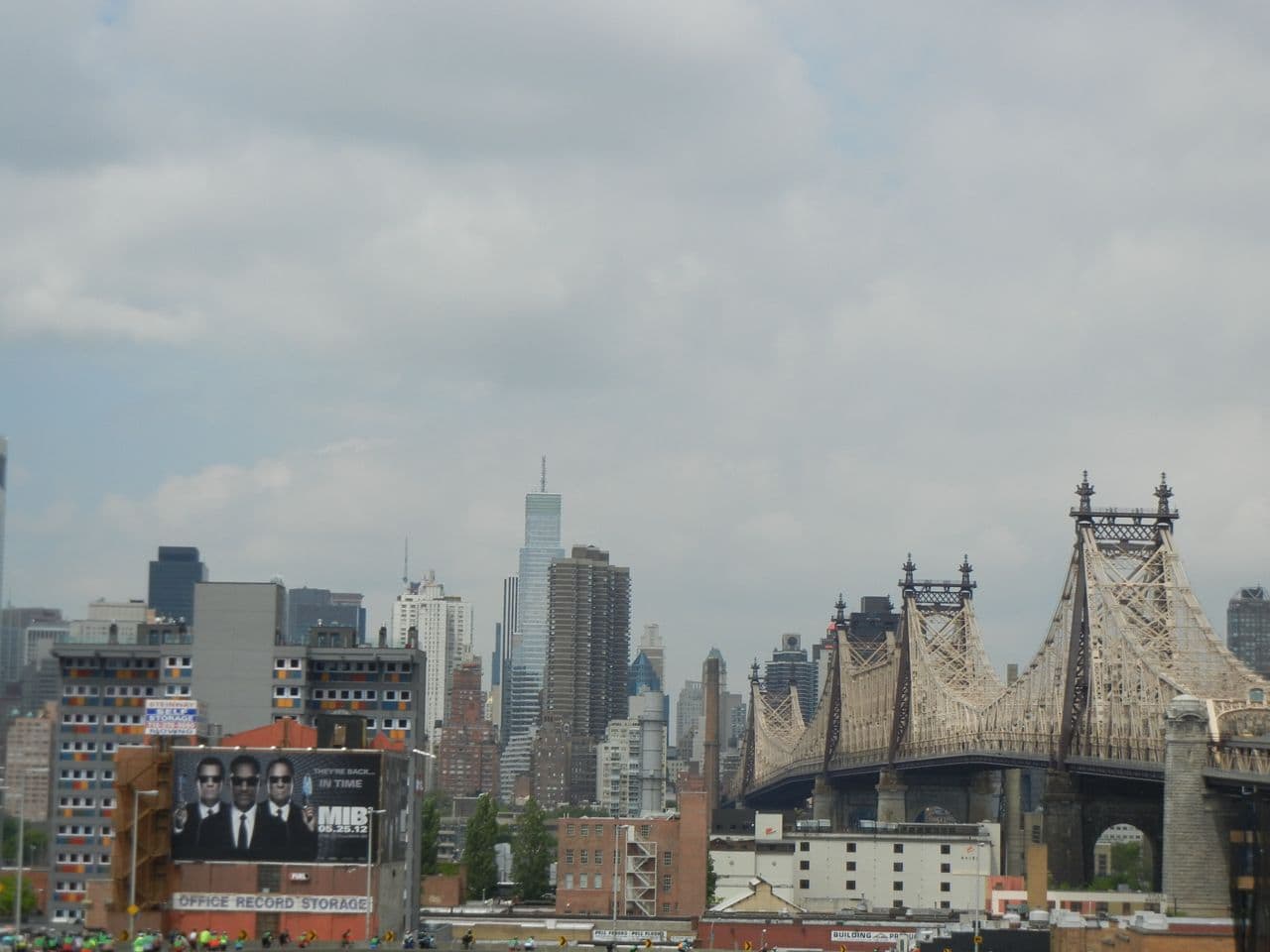 Ignore how dorky I look in my helmet. Seriously though, does anyone look good in a helmet? 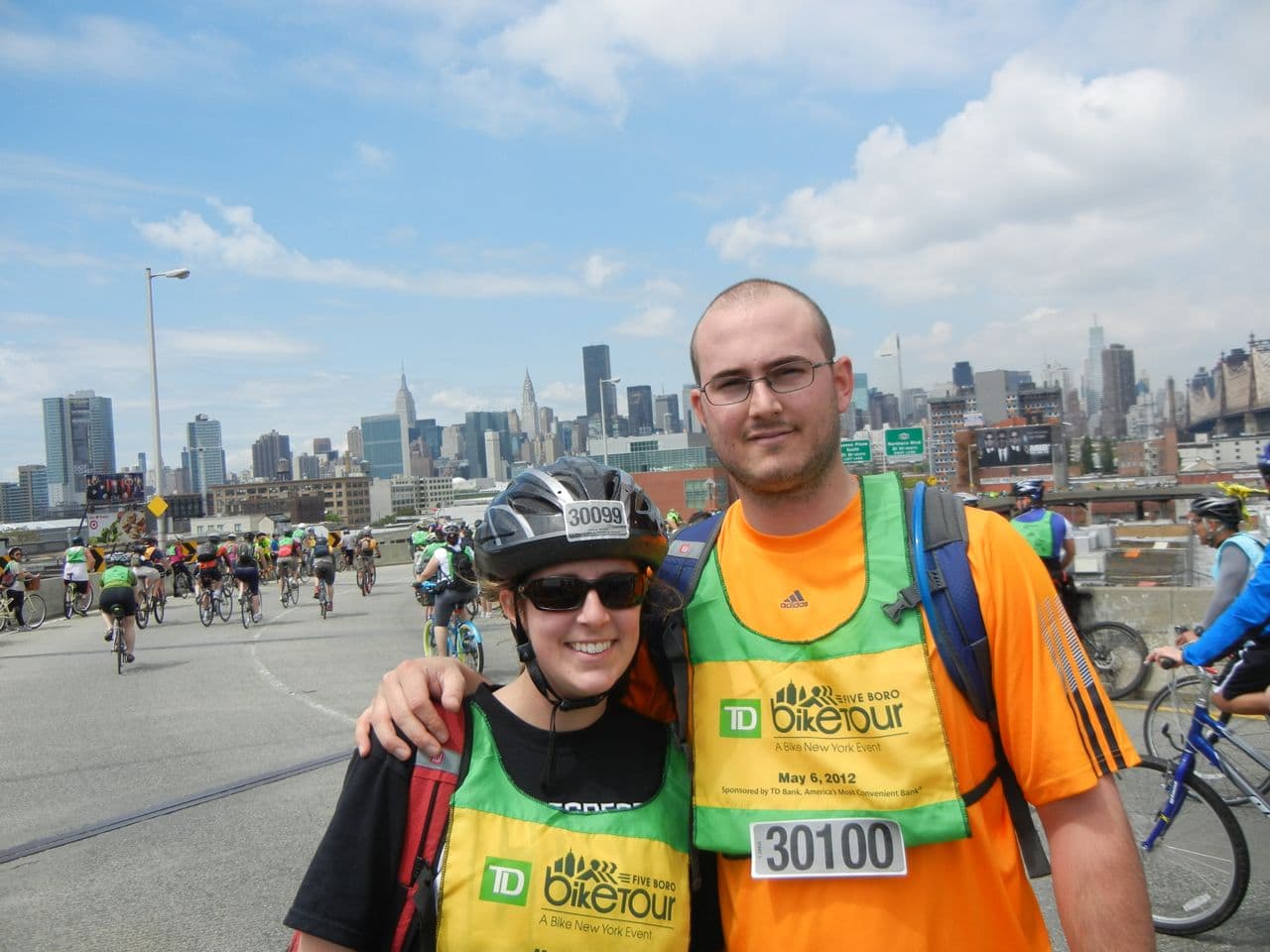 Eh, I guess my sister-in-law looks pretty good. For a model-type. 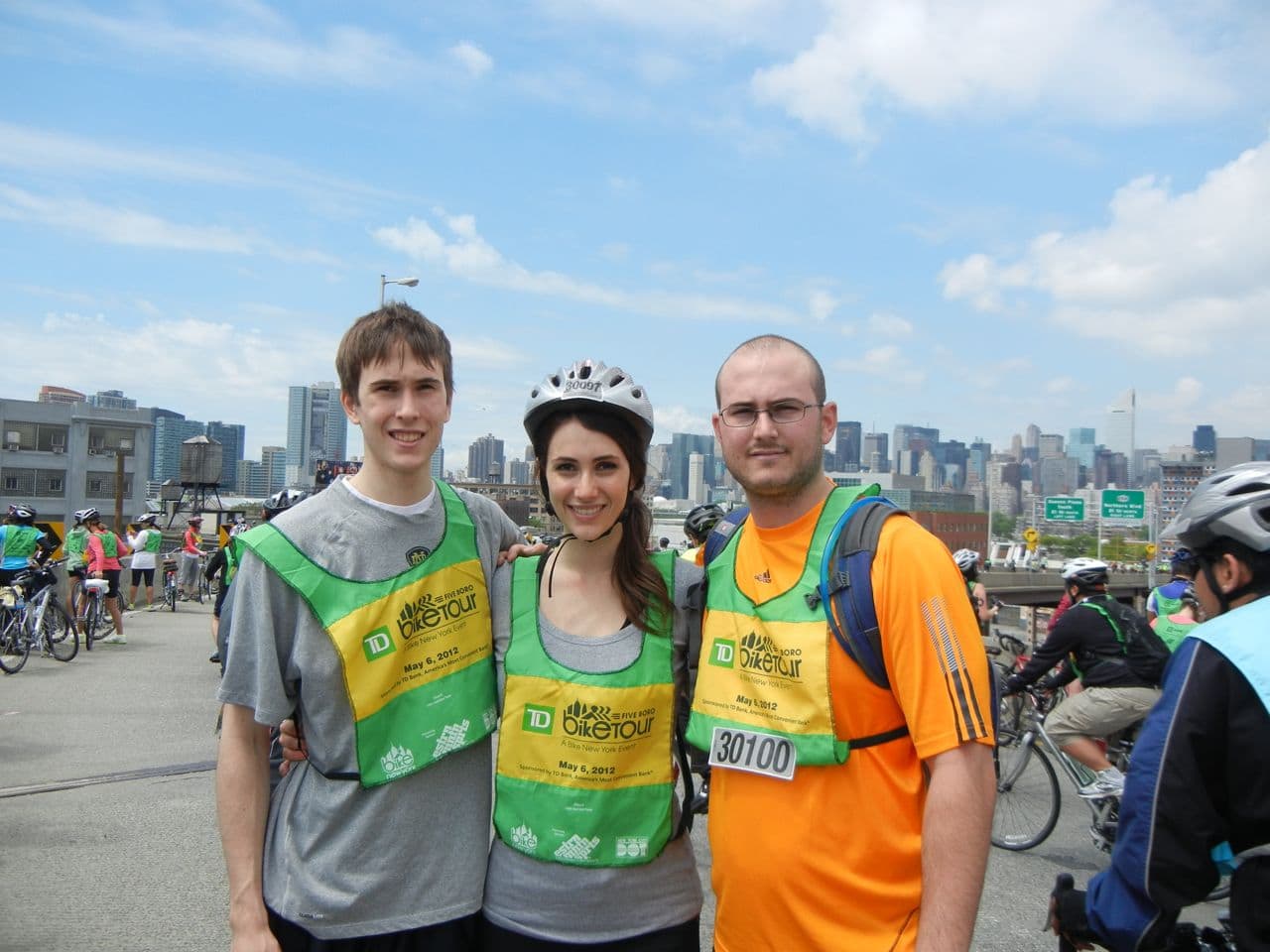 We were back in the saddle, complaining each and every second of the way as our nether regions were sore already. So much chaffing and discomfort. Blech. My knees weren’t happy with me either, as my bike seat was waaay too low. Glad I figured that out with 3 miles left in the tour. Sweet. We made it to our first rest stop and I waddled around to collect fruit and water, trying to ignore the throbbing pain in so many parts of my body. My 19-year old brother-in-law was so cheeky with his “I’m getting too old for this” comment. So cheeky. I look 15 times happier here than I actually felt.

Gotta keep a smile on. Even the 19-year old was complaining, so that made me feel better. 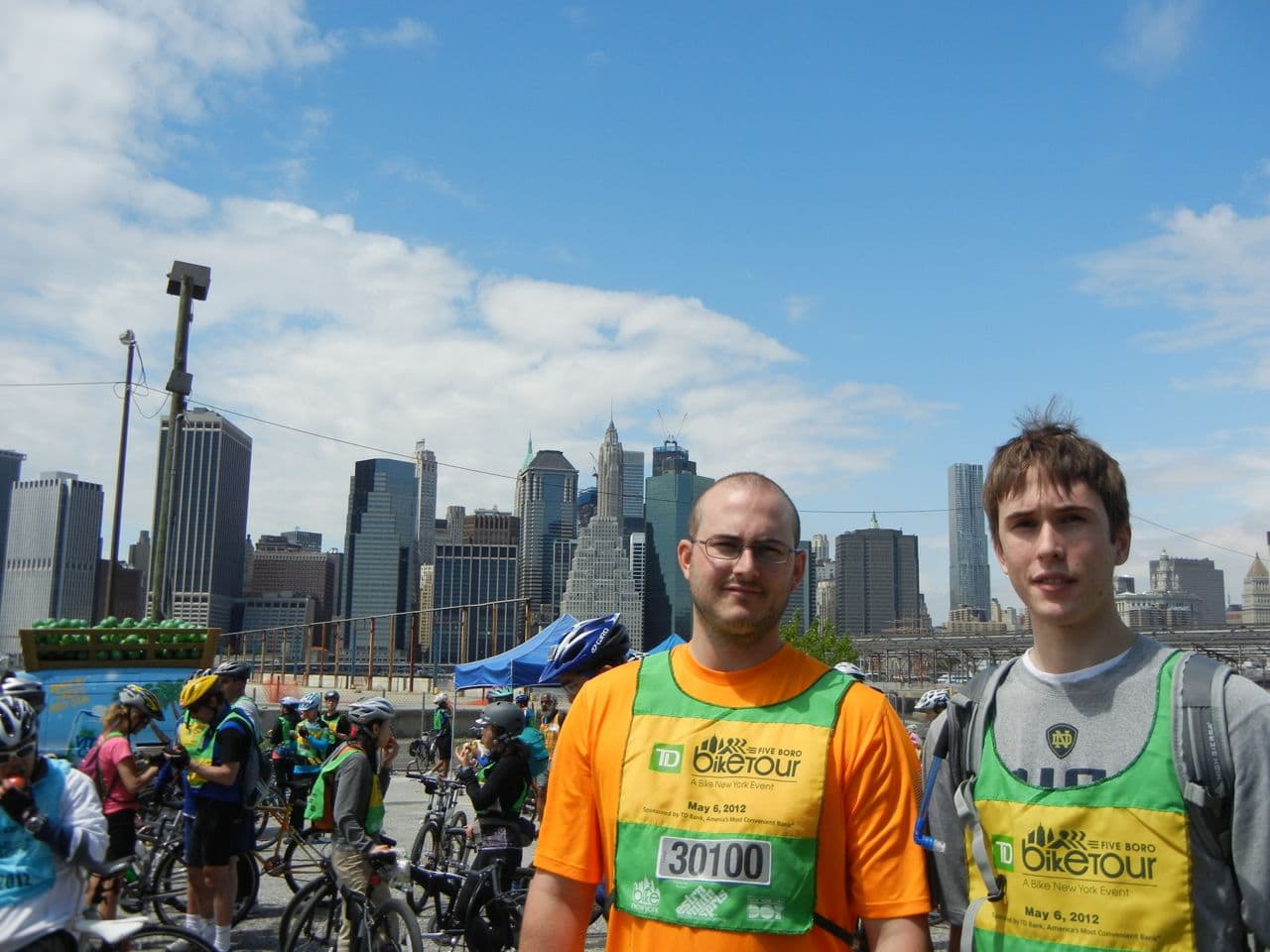 A shot of Lady Liberty and we were on our way to the finish line! 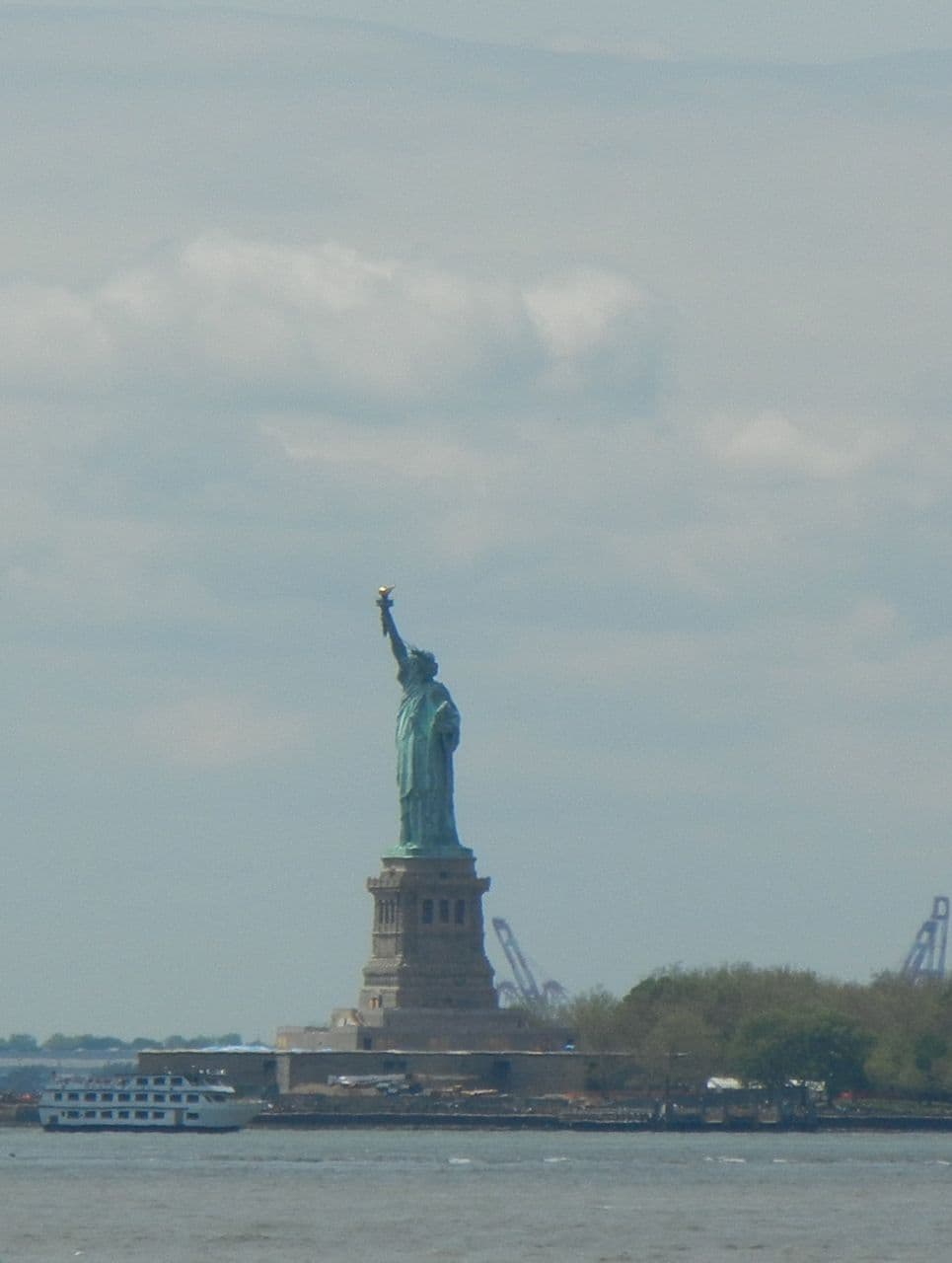 Before you get to the finish line, (food and live music and free massages, yes please!) you have to first cross the Verrazano-Narrows Bridge from Brooklyn to Staten Island. It’s FREAKING long and the first half is, of course, uphill. It sucked, but I powered through it with everything I had left. This was Erin (if you have been skimming this post, she’s my model-type, super-fit sister-in-law) after she finished so at least I wasn’t the only spent one. Hi Erin! Love you! Sorry I didn’t tell you I was taking this picture of you so I could use it in my blog! Kisses! 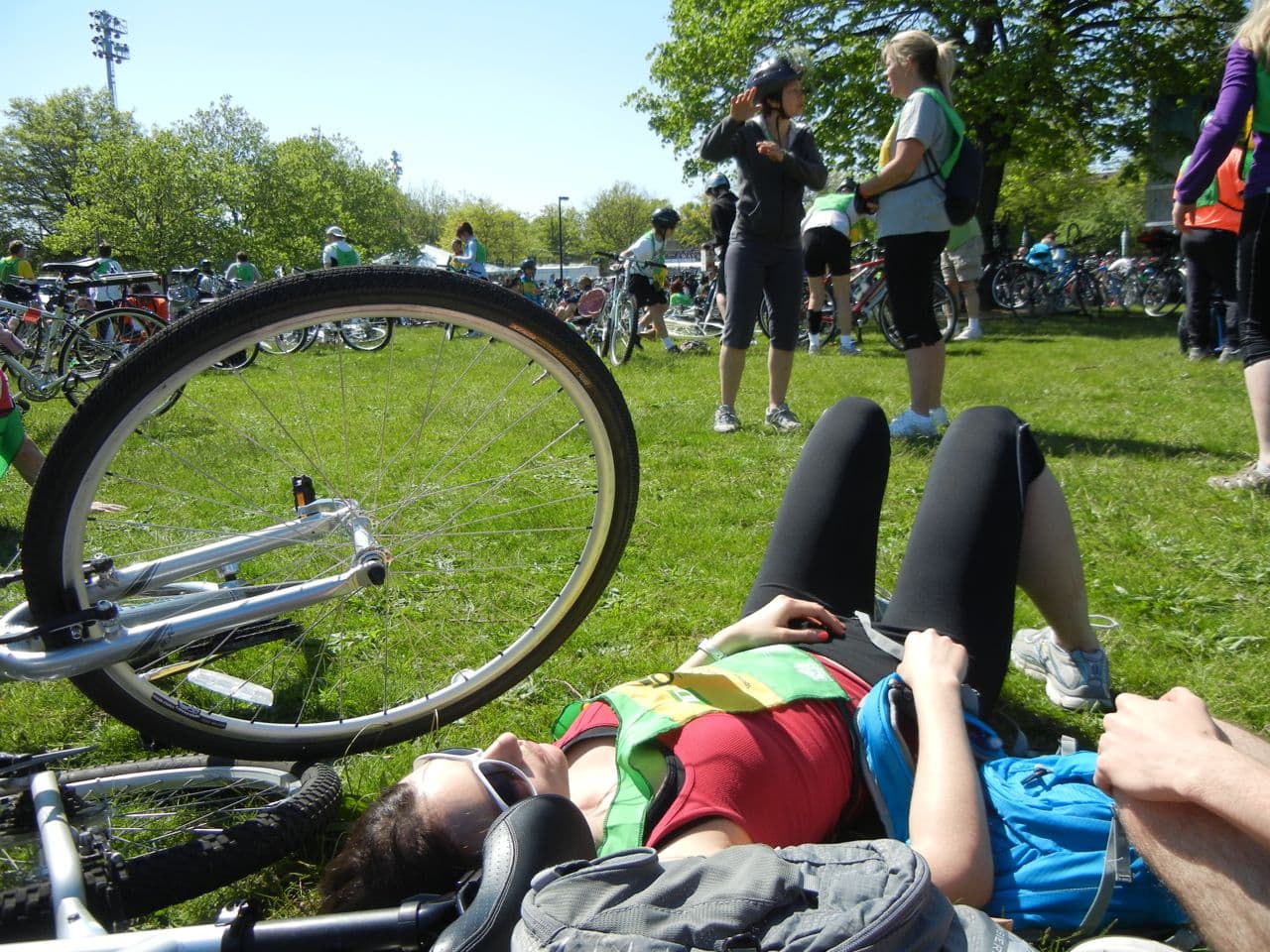 This spry couple in their 60s/70s (it’s so hard to tell with old people!) was dancing after they crossed the finish line. DANCING. After they biked 40+ miles. I would say I want to be like them when I grow up but I know myself pretty well, and I think I’ll be just fine cheering on other people by that age. 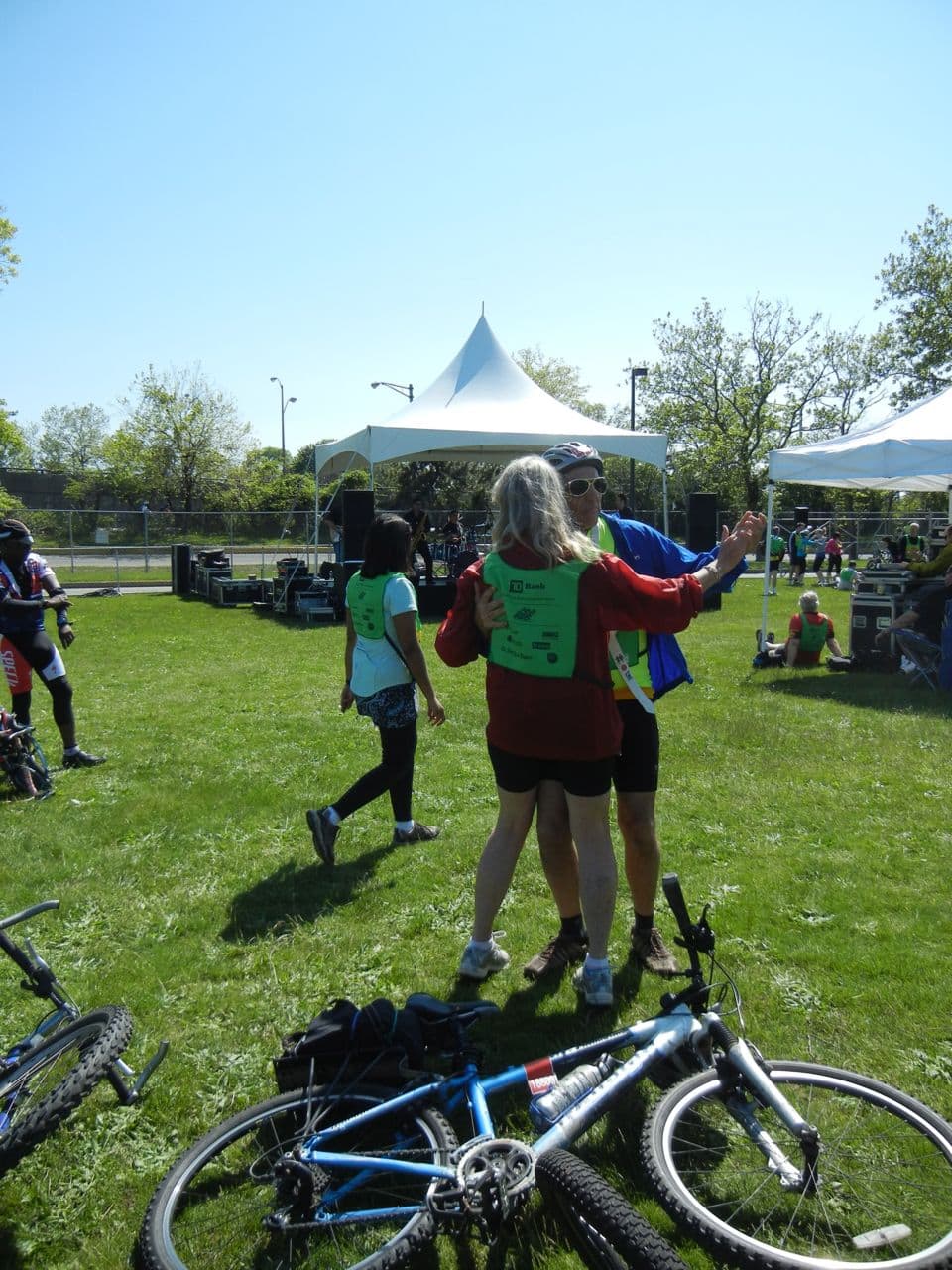 We peaced out of the festival pretty quickly, only to wait in the longest line ever to catch the Staten Island Ferry back to Battery Park. We weren’t happy about a lot of the waiting around. Too much time to cramp up and feel old. We finally made it back to the train after biking the 5mi back to GCT and had this creepy kid to deal with. 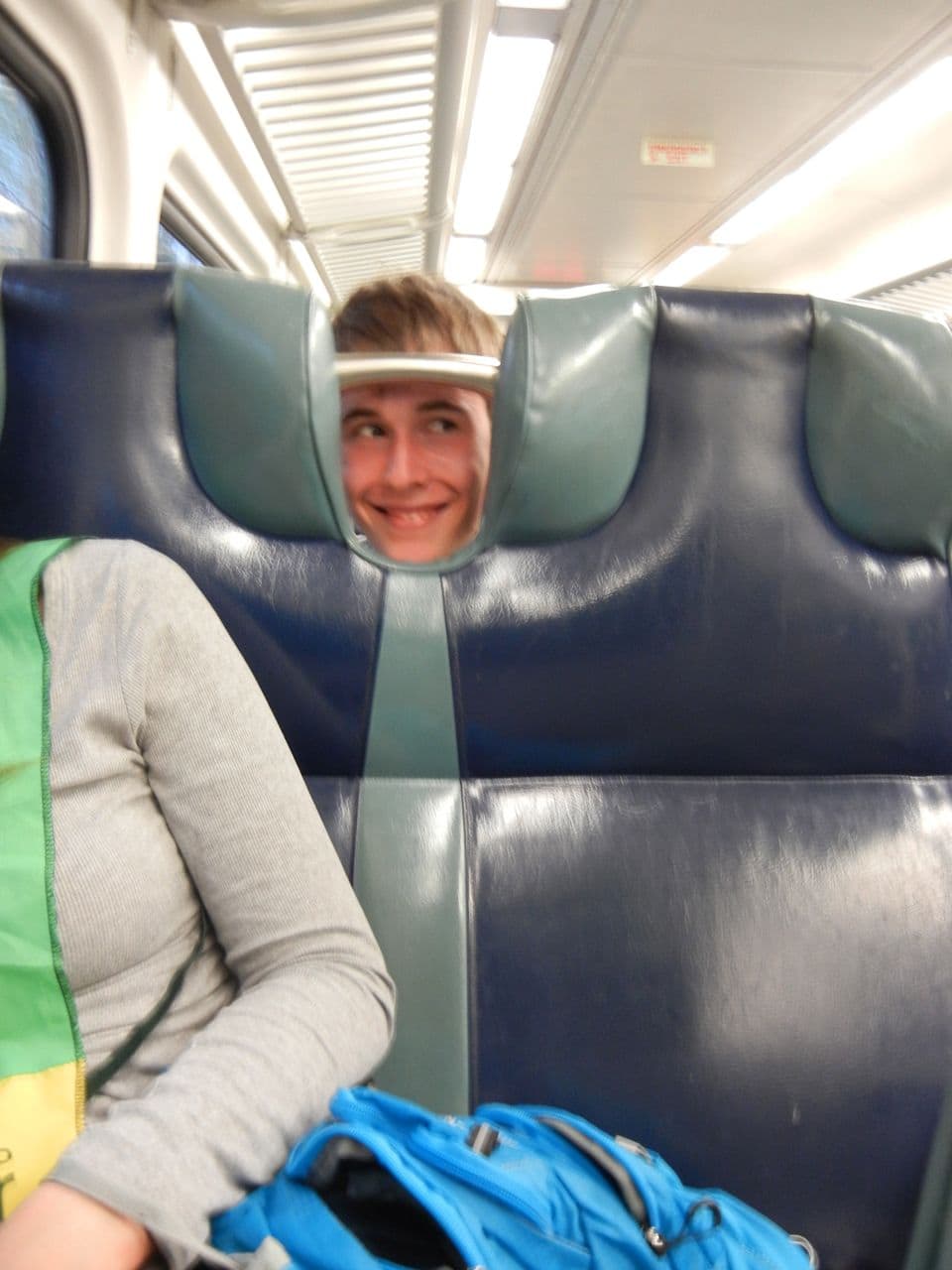 Oh well, no nightmares for me tonight. I’ll be sleeping like a baby for weeks after that ride. My fitness app tells me I burned 2,010 calories. Think that’s crap? I’m going to go with it. It was a lot of fun in the end and even though at the time, I said “screw this, never again,” I could be easily convinced to hop on board for next year. Here is a shot of our route, for the NYC geography enthusiasts.

Anyone doing any biking with Jack Torrance this spring? No? Only me? Cool.